Conflicting accounts of the raid emerged amid renewed scrutiny of the Pentagon's oversight of civilian casualties in Syria. 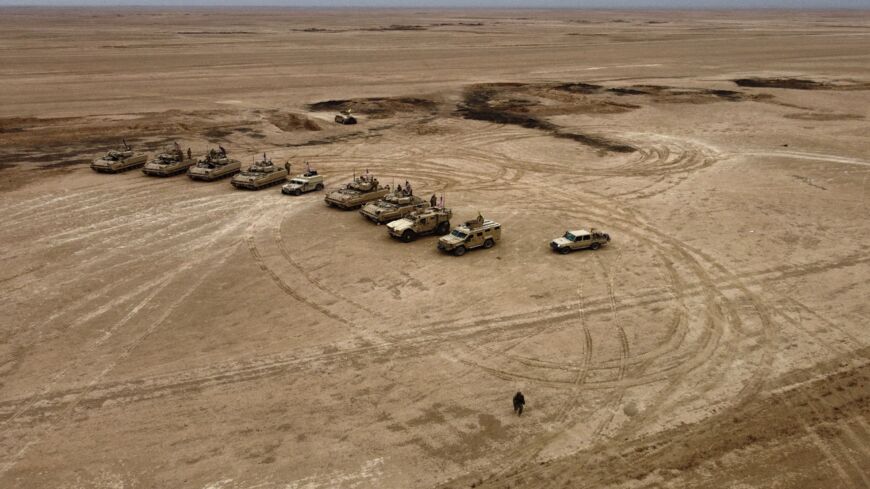 This picture taken on Dec. 7, 2021, shows an aerial view of US Bradley Fighting Vehicles during a joint military exercise between the Syrian Democratic Forces and the US-led international coalition against the Islamic State in the countryside of Deir ez-Zor in northeastern Syria. - DELIL SOULEIMAN/AFP via Getty Images

The Pentagon on Monday said four “armed Daesh (Islamic State [IS]) fighters” were killed in an overnight raid carried out in Syria’s eastern Deir ez-Zor province.

“Last night, there were two operations conducted in al-Busayrah, Syria. One was a partnered operation with the Syrian Democratic Forces (SDF), and the other was a unilateral SDF operation,” Pentagon spokesperson Cmdr. Jessica McNulty told Al-Monitor via email.

“The partnered operation resulted in no detentions and the death of four armed Daesh fighters, one of whom was wearing a suicide vest,” McNulty wrote, adding that the vest was destroyed by coalition forces.

The raid targeted “known Daesh terrorists responsible for facilitation of weapons and fighters to support ISIS attacks. These terrorists attacked an SDF checkpoint on December 10, 2021,” according to the spokesperson.

The Pentagon’s statement came after Syria’s government-run news agency claimed that three civilians were killed in an operation in the town and that US forces had “kidnapped a number of the locals.”

The UK-based Syrian Observatory for Human Rights (SOHR) and pro-opposition Euphrates Post said that a local schoolteacher and his two sons were killed in the raid amid local reports of explosions and gunfire. The SOHR later said a fourth person had been killed in the operation, which it said targeted IS suspects.

The SDF released a statement early Monday saying five people — “most of whom were wearing explosive belts” — were killed after anti-terror units came under fire during a joint raid on a suspected IS cell.

The various accounts of the incident come amid renewed scrutiny over civilian harm caused by the US-led operations in Syria.

A New York Times investigation revealed new details yesterday about loose oversight of a little-known group of Delta Force operatives running airstrike procedures during the height of the war against IS in Syria. Speaking during a press briefing on Monday, Pentagon press secretary John Kirby declined to comment on the Times' latest report.

The United States maintains some 900 troops in Syria mainly to assist local fighters tracking down the remnants of IS. That footprint has been reduced from some 2,500 American troops who were present during the height of the war against the jihadist proto-state.

The Syrian regime under President Bashar al-Assad objects to the US military's presence and has vowed to retake the rest of the country by force if necessary, a task widely seen as insurmountable as long as American and Turkish troops remain on the ground in parts of the country.

The United States and the UN have called for a political solution to Syria's conflict, which is now in its 11th year.