Renewed fighting in Iraq and Syria is bound to set off scrutiny in Congress. 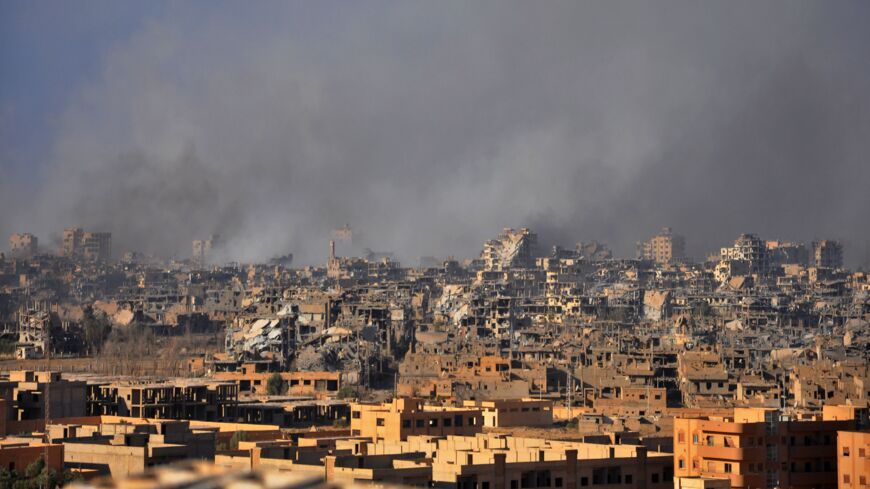 Smoke rises from buildings following an airstrike by Syrian government forces in the eastern city of Deir ez-Zor, on Oct. 31, 2017. - STRINGER/AFP via Getty Images

Iran-backed militias launched several rockets near a US-led coalition base in eastern Syria on Monday evening in apparent retaliation for American airstrikes that killed four of their fighters the night prior.

No US or coalition personnel were initially reported hurt in the attack, according to Operation Inherent Resolve spokesperson Col. Wayne Marotto. US troops responded to the barrage with their own artillery fire aimed at knocking out the launch sites, Marotto said.

Local networks Ayn al-Furat and Deir Ezzor 24 also reported that the United States responded with airstrikes, which neither the coalition nor Pentagon has confirmed.

The blows follow a series of tit-for-tat exchanges between Iran-backed militias and US-led coalition forces in Iraq in recent years, but they mark a rare spread of the conflict into neighboring Syria.

Early on Monday morning, US fighter jets bombed three sites used by pro-Iran militias on both sides of the border that divides Syria from Iraq. The airstrikes, the second set authorized by President Joe Biden since taking office, came in retaliation for a series of drone attacks on sensitive US positions in Iraq in recent months.

Both the militias and the US-led international coalition fought against the Islamic State (IS), but pro-Iran groups continue to seek to oust the US forces from the region.

Pro-Iran social media channels shared video on Monday night purporting to show rockets streaming toward Al-Omar base in eastern Syria’s Deir ez-Zor province. The base, which sits near Syria’s largest known oil reserves, was captured by US forces and the Kurdish-led Syrian Democratic Forces (SDF) in 2017 during the war against IS.

Al-Omar lies on the northeast side of the Euphrates River, which divides a swath of Syria controlled by the US-led coalition and local Kurdish allies from areas held by the Bashar al-Assad regime.

On the regime’s side of the river, tens of thousands of militia fighters, many of them supported by Iran’s Islamic Revolutionary Guard Corps, bolster Assad’s ranks alongside the Russian paramilitary contractors.

Fighting between the two sides in Syria has been rare, likely in part due to a reputation earned by the thinly spread Americans for launching swift and devastating retaliation on those who encroach on their positions.

In 2018, American air and artillery strikes decimated as many as 300 pro-regime fighters, including Russian mercenaries, after the Pentagon said the group crossed the river toward the Conoco natural gas field, home to a US and SDF base not far from al-Omar.

The east side of the Euphrates in Deir ez-Zor holds the majority of Syria’s oil reserves, a coveted prize for Assad who has vowed to retake the region by force despite the depleted strength of his army.

Syria’s chaotic war has turned the predominantly Arab Deir ez-Zor into a patchwork of ethnic and sectarian grievances, which the Assad regime has sought to exploit.

The Biden administration has so far largely continued the previous administration’s Syria policy, which was designed in part to limit Russia and Iran’s strategic gains on the Mediterranean.

Washington’s stance is built around holding territory captured during the war against IS and punishing economic sanctions to pressure the Assad regime into political reforms. Some 900 US troops remain in Syria, where they continue to train Kurdish-led forces to root out IS sleeper cells.

The troops’ presence and authority to defend the areas they occupy offer policymakers the added benefit of restricting access to key roads and oilfields coveted by Iran-backed militias and the Assad government.

Another roughly 2,500 US troops remain in Iraq along with other members from the international coalition to defeat IS despite intense pressure from the militias on the Iraqi government to expel the Americans.