US strikes Iran-backed militias in Syria for third day

The White House sought to halt attacks on American troops in Syria by authorizing airstrikes on a depot used by the IRGC. Local militias have responded by firing more rockets. 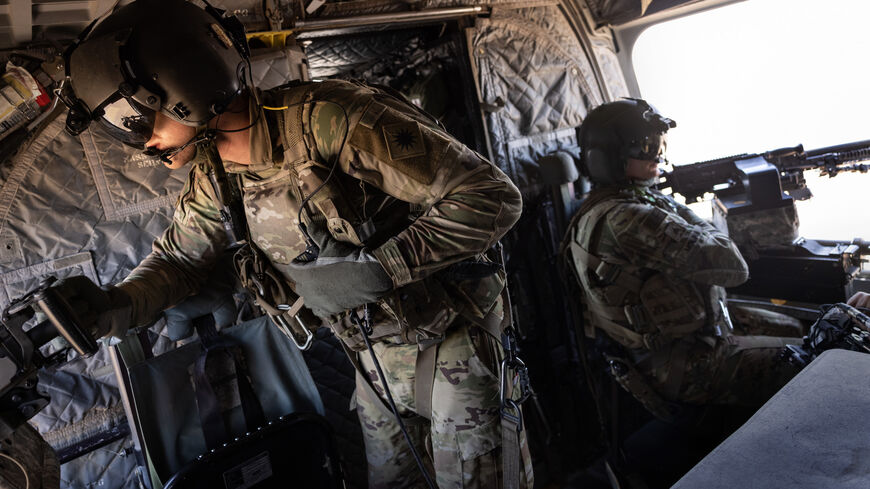 American military aircraft struck Iran-backed militia targets in eastern Syria for the third day in a row on Thursday as commanders sought to suppress a new flurry of attacks on US bases in the country.

The US deployed Apache helicopters, AC-130 gunships and M777 artillery in response to rocket fire that lightly injured three US soldiers at the Conoco base in Syria’s Deir ez-Zor province around 7:20 p.m. on Wednesday. At least two additional rockets later landed outside the United States' Green Village base at al-Omar oilfield.

“The United States does not seek conflict with Iran, but we will continue to take the measures necessary to protect and defend our people,” the statement read.

“We will not tolerate these brazen attacks and [we] will aggressively respond by employing any and all means at our disposal to protect and defend ourselves,” noted Maj. Gen. John Brennan, the commander of US-led coalition forces in the fight against the Islamic State (IS).

Why it matters: CENTCOM is seeking to contain the local fallout from a blitz of US airstrikes launched before dawn on Wednesday against what officials said were unoccupied IRGC-linked bunkers in Deir ez-Zor.

Wednesday’s airstrikes on the Ayyash depot were authorized by US President Joe Biden in response to two prior barrages targeting US bases in Syria on Aug. 15 at Green Village and Al-Tanf, neither of which caused damage or injured any personnel.

The Pentagon’s top policy chief, Colin Kahl, told reporters yesterday that the strikes on the Ayyash facility were carefully designed to send a message to Iran and its proxies while avoiding any casualties.

“We don’t want Iran to draw the wrong conclusion that they can just keep doing this,” Kahl said yesterday.

The previous US administration opted to keep some 900 troops in Syria in the wake of the multinational war against IS in part as a bulwark against Iranian influence. The Biden White House has distanced itself from that messaging but insists the troops will remain.

Iran’s Islamic Revolutionary Guard Corps (IRGC) supports tens of thousands of local and foreign militia members aligned with the regime of President Bashar al-Assad in Syria’s stalemated civil war. The militias have a heavy presence in eastern Syria on the west side of the Euphrates, a key thoroughfare for bringing in weapons and supplies from Iraq.

US military officials have not specified which groups were involved in the recent attacks. The militia overseeing the Ayyash bunkers was not tied to the Aug. 15 attacks on US bases, Al-Monitor first reported yesterday, but the facilities have been used by IRGC personnel, White House National Security Council coordinator John Kirby said yesterday.

A military official speaking to Al-Monitor on the condition of anonymity said that Wednesday’s strikes on the depot were intended to signal that the United States would hold the militias broadly responsible for Iran-backed attacks on American personnel.

“You have to restore deterrence,” the official said.

What's next: The United States submitted its response this week to Iran's comments on the European Union's draft agreement for both sides to return to the 2015 Iran nuclear deal.

Pentagon policy chief Kahl said yesterday that a potential return to the nuclear deal would have no bearing on the US military's readiness to strike back if attacked in the region.

"We have lots of ways of communicating with [Iranian officials]," Kahl said. "We have tapped all of those channels to make it clear to the Iranians that what they are doing is unacceptable and that we will defend ourselves if necessary."