Kuwait's announcement follows the detection of cases in Israel, Saudi Arabia and the United Arab Emirates. 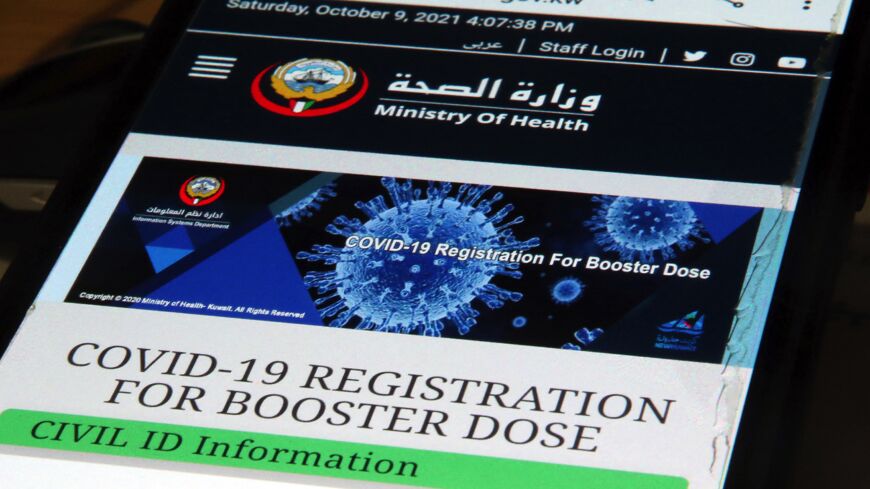 This picture taken on Oct. 9, 2021, shows a view of a phone displaying the Kuwaiti Health Ministry's registration page for a COVID-19 coronavirus vaccine booster dose, in Kuwait City. -

Citing a Health Ministry spokesperson, KUNA reported the infection was detected in a traveler arriving in Kuwait from an African country. The traveler, who had received both vaccine doses, is now quarantined.

The ministry spokesperson, Abdullah al-Sanad, described the coronavirus situation in Kuwait as “stable” but called on citizens and residents to get coronavirus vaccine boosters to slow the spread of the virus.

On Wednesday, Pfizer and BioNTech said preliminary testing indicated that three doses of their vaccine provide effective protection against Omicron, a highly mutated version of coronavirus that South Africa first reported last month. The US drugmakers expect to have an Omicron-specific vaccine available by March.

Researchers are scrambling to understand how transmissible the variant is and whether it evades the protection offered by existing vaccines. In an effort to buy time, several Middle East states, including Saudi Arabia, Qatar, the United Arab Emirates, Jordan, Bahrain and Egypt, have imposed new border controls and travel restrictions on southern African countries.

Last month, Kuwait suspended direct commercial flights from South Africa and eight other countries in Africa. Morocco has banned all incoming flights for a two-week period, and Israel announced a two-week ban on foreign nationals entering the country.

On Wednesday, the Kuwait Health Ministry reported 33 new cases and one coronavirus-related death, bringing the total infection count to more than 413,500. The country has recorded 2,466 deaths from the virus since confirming its first cases in 2020.