Iran threatens sanctions against US over treatment of Black Americans

An Iranian judicial official said the Islamic Republic is concerned about police brutality against Black people in the United States, citing the murder of George Floyd. 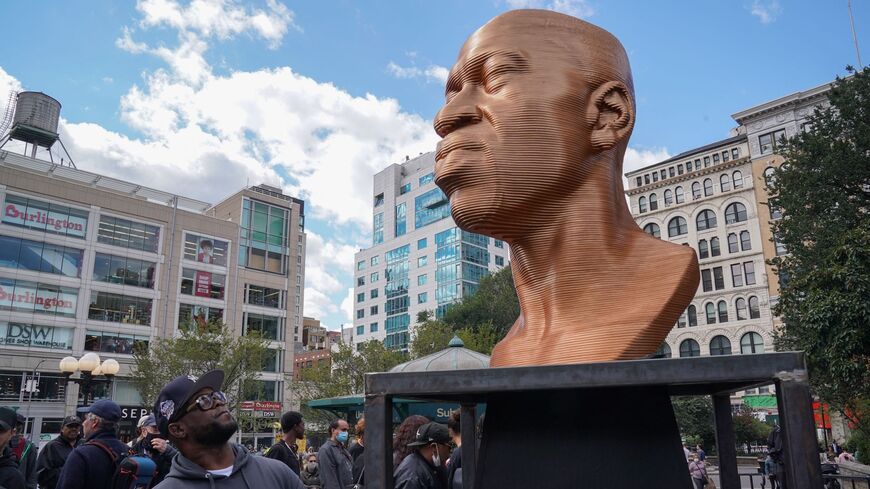 A man looks at a George Floyd statue at the unveiling of the SEENINJUSTICE exhibit, featuring sculptures by artist Chris Carnabucci at Union Square Park in New York, on Sept. 30, 2021. - BRYAN R. SMITH/AFP via Getty Images

The Iranian government vowed today to impose sanctions on the United States over racial and policing issues.

Secretary-General of Iran's Human Rights Office Kazem Gharibabadi said the Islamic Republic will publish a list of American entities and individuals involved in human rights abuses. They will then be subject to sanctions from Iran, the official Islamic Republic News Agency reported.

Gharibabadi did not offer specifics on what the sanctions will entail, but said the move relates to policing issues in the United States, particularly in regard to Black Americans.

“Human rights experts confirmed that police brutality in the US against people of color especially, African-Americans, should be considered systemic racism,” he said.

Gharibabadi specifically mentioned the case of George Floyd, a Black man who was killed by police officer Derek Chauvin in the US state of Minnesota in 2020. Chauvin was convicted of murder earlier this year. The official also referred to the treatment of prisoners in the United States and the “big number of women in jails,” according to the Islamic Republic News Agency.

Iranian state media outlets and officials frequently comment on police and racial issues in the United States, particularly Floyd’s murder and the Black Lives Matter movement. In October, the semi-official Press TV reported on the defacement of a Floyd statue in New York City. In September, Iranian Foreign Minister Hossein Amirabdollahian mentioned Floyd’s murder in a speech about racial discrimination around the world.

Amirabdollahian’s predecessor Mohammad Javad Zarif made similar comments in June. He criticized Europe for being “deafeningly silent” about Black Lives Matter protests in the United States and the police response to them.

“US cities are scenes of brutality against protesters & press, as military crackdown is threatened,” tweeted Zarif.

Gharibabadi also noted the numerous US sanctions on Iran in his remarks today. The two countries are currently negotiating a US return to the Iran nuclear deal, which would lift some of these sanctions in exchange for Iranian compliance on its nuclear program.