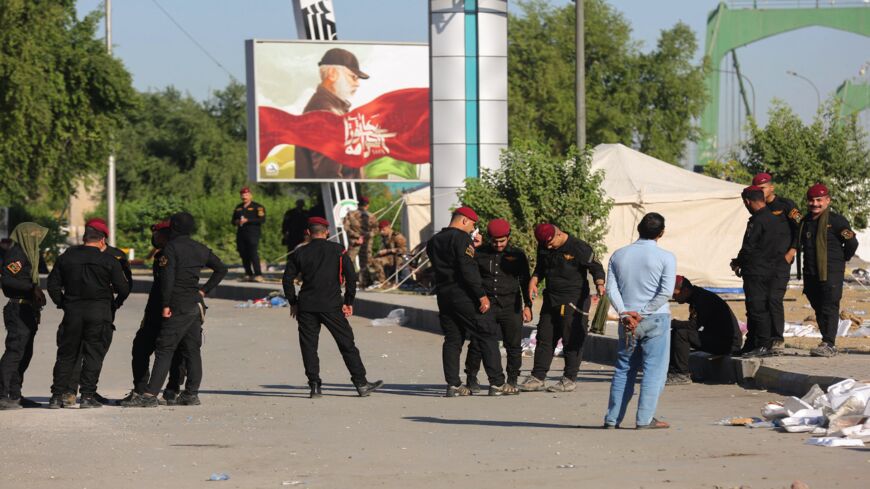 Security forces loyal to Iraq's Hashid al-Shaabi paramilitary network stand next to a protest camp set up by network supporters near the Green Zone of the capital, Baghdad, on Nov. 6, 2021, a day after clashes with the police during a demonstration to express rejection of last month's election results. - AHMAD AL-RUBAYE/AFP via Getty Images

BAGHDAD — A committee charged with investigating violence between Iraqi security forces and pro-militia demonstrators released its report Dec. 1 on the Nov. 5 clashes that occurred as demonstrators protested election results.

Following the announcement of initial election results, hundreds of members of the PMU and its affiliated forces took to the streets and accused the government of rigging the elections.

The PMU supporters camped out at the suspension bridge gate of Baghdad's Green Zone where government buildings and foreign embassies are located.

Tensions between the two sides turned violent Nov. 5 when demonstrators attempted to storm the Green Zone.

As a result, two security forces were killed and many people were injured. The committee discovered that demonstrators fired the first bullets.

"At eight o'clock in the evening, according to testimonies and data, it was found that two pistols were used from the side of protestors toward the security forces," stated the committee spokesman.

The committee confirmed that security forces were given strict orders not to use live ammunition under any condition.

This was stressed previously by the government Security Cell Media via a tweet that “the commander in chief issued explicit orders against the usage of live bullets.”

A few members of the security forces were arrested, but the lack of CCTV coverage in the area left the committee unable to provide more information and identify the perpetrators, according to the committee’s spokesman.

It is worth mentioning that the PMU supporters damaged many CCTV cameras and removed them from the area in the days before the incident.

The committee’s report was sent to a court for further investigation and in order to prosecute responsible individuals.

Although the investigation into the incident was demanded by the pro-PMU demonstration leaders who are mostly from the Coordination Framework (CF), it did not satisfy them.

The CF is a Shiite political body mostly consisting of PMU faction leaders and affiliated militias.

It issued a statement Dec. 2 denying there were any bullets fired from the demonstrators' side, blaming Kadhimi for the incident and calling for his prosecution.

It is clear that the militias are attempting to use the protests and the involved violence as political pressure on Kadhimi.

There have been tensions between PMU leaders and Kadhimi since he was the head of the Iraqi Intelligence Service. Kadhimi has been working constantly but quietly to constrain the militias.

Although the investigation on the violence against PMU supporters has not satisfied the militias leaders, who are behind the demonstrations, it seems that it was successful in calming tensions.

This is especially true after the meeting between Muqtada al-Sadr and PMU political leaders Dec. 2 to break the ice between the two parties.

Following the meeting at Hadi al-Amiri’s residence in Baghdad, the militia’s Telegram channel, Sabreen News, announced that there is an agreement for demonstrators to pack their tents and move away from the suspension bridge gate.