Gaza’s very small Christian community has been a strong force for the economy. 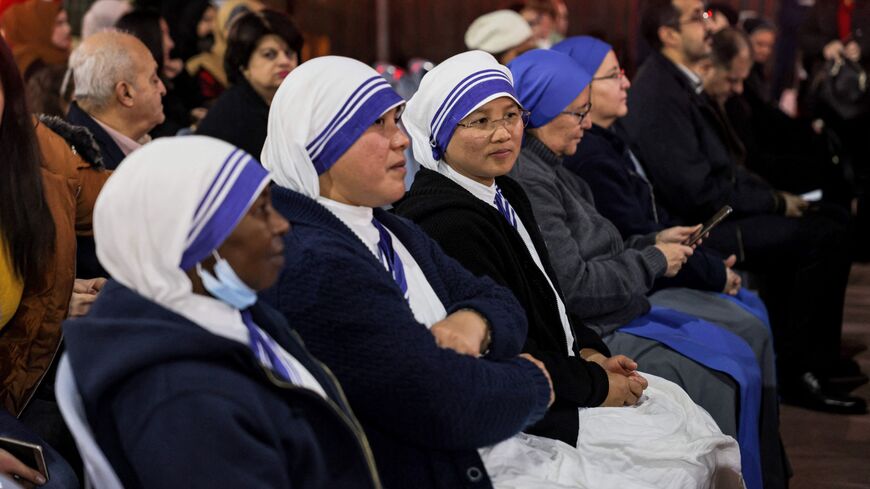 Catholic nuns from the Missionaries of Charity order attend the lighting of the Christmas tree in the courtyard of the YMCA Gaza in Gaza City on Dec. 10, 2021. - MOHAMMED ABED/AFP via Getty Images

Despite their small number, Christians are an integral part of the Palestinian social fabric in the Gaza Strip. Many active Christian institutions provide aid to marginalized segments of Palestinian society without distinguishing between Muslims and Christians. These include the Near East Council of Churches, the Young Men’s Christian Association, in addition to many Christian schools.

“The economic situation in the Gaza Strip is catastrophic and stagnant due to the PA salary cuts this month and the ongoing blockade and repeated Israeli military operations," Maher al-Tabbah, economic analyst and director of the Gaza Commerce and Trade Chamber, told Al-Monitor. "International projects offered by donor countries to institutions in the Gaza Strip are reviving it. These projects are limiting catastrophic crises, providing job opportunities, curbing unemployment and poverty and giving citizens some hope.”

Many Christian institutions have played a strong role in Gaza’s economy, such as the Catholic Relief Services (CRS), which offers temporary employment projects and support. The Middle East Council of Churches Department of Service for Palestinian Refugees has been offering training sessions and professional training diplomas for years.

The Pontifical Mission for Palestine, as well, helps construct institutions, and there are private Christian schools and hospitals in the Gaza Strip. Caritas provides aid and medicines to patients, and the YMCA and the Orthodox Cultural Center contribute to the entertainment, sports and culture.

Several associations refused to talk to Al-Monitor about their operations in Gaza, referring instead to the main center of these associations abroad, like Jerusalem or European countries.

The Families Bakery run by Beshara Theodor Chehade, a successful Palestinian businessman from the Orthodox Christian community and a strong supporter of the Palestinian economy, is considered the best bakery in the Gaza Strip.

Since opening the business in 1985, Chehade said, "We have two main branches in the Gaza Strip, where our bakeries are distribution points for a number of supermarkets and small shops. Despite the difficult economic conditions in the Gaza Strip and cumbersome electricity taxes and gas and bakery costs, we are still going, and we have preserved our success. I love my city, Gaza, and I am attached to it.”

Dar Al-Kalima University College of Arts and Culture in Bethlehem and the Papal Mission in Jerusalem conducted a study on Christian institutions and their impact on Palestinian society and refugee employment and found out that these institutions spend $416 million annually on vital sectors such as health care, education, social services, vocational training and development assistance interventions in all Palestinian governorates.

Gold trader Rafiq Ayyad, 80, told Al-Monitor that the profession has been in his family for nearly five centuries. With the decline in the dollar, he said, many people are converting their money to gold. "As you are aware, gold is a tough profession," he said, " but the name of the goldsmith becomes familiar once someone buys from him due to his good treatment, honesty, and decency.”

Adel Shaheen, the owner of Adel Pharmacy in the Gaza Strip, came home from pharmacy school in Ukraine to open his own store in 1999. "My family encouraged me a lot to come home and serve my country, he said. “I also own a large pharmaceutical company called Al-Watani Store, and I distribute throughout the Gaza Strip. … Even during difficult military operations during the coronavirus pandemic, we have always been present. Our service is humanitarian, not materialistic."