As the Christian holidays and New Year’s celebrations draw near and put some in the mood for a glass of wine, how are the preparations looking under Hamas in the Gaza Strip with both Muslims and Christians celebrating these holidays? 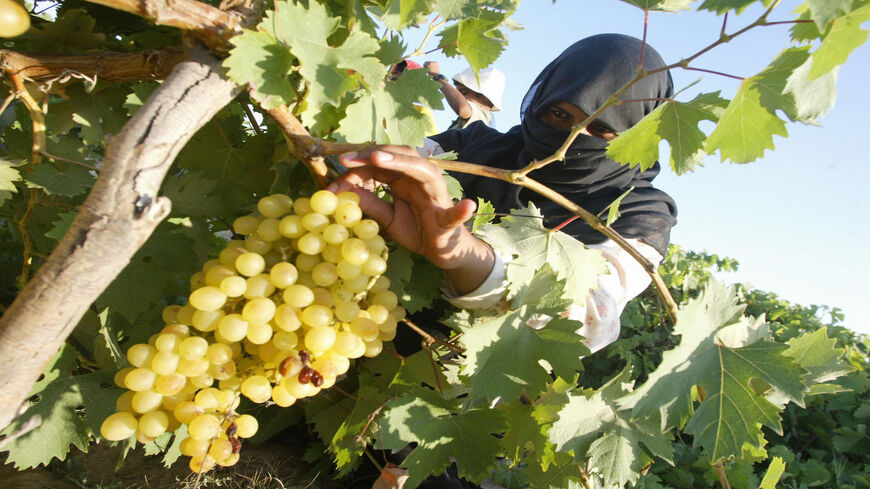 While wine has been made in the Gaza Strip for thousands of years, wine and liquor are now illegal under the control of Hamas in Gaza, where a conservative society prevails as it adheres to the teachings of Islamic ideology.

Two months ago, archaeologists discovered a huge industrial area dating back to the Byzantine era and containing a winery that was the largest in the world 1,500 years ago, in what is now the Israeli town of Yavne. Among the discoveries were thousands of pottery jars with the inscription “Gaza wine,” a global brand at the time.

The Gaza Strip used to be known for its wine production. The Proceedings of the National Academy of Sciences of the United States of America, one of the world's most-cited multidisciplinary scientific serials, published in 2019 research findings indicating that the commercial production of luxury “Gaza wine” was long assumed to be the economic basis of Late Antiquity settlement in the Negev Desert.

Asked whether wine is currently found in the Gaza Strip, a Muslim Gazan citizen told Al-Monitor on condition of anonymity, “A few months ago, I attended the wedding of a Christian friend, and I noticed bottles that I had not seen in the markets. At first, I thought they were bottles of barley or soft drink, but when I asked I realized that there were three types of spirits — wine, arak and cognac, and that these enter Gaza through the crossings, where the authorities allow Christians or foreign citizens to bring in a bottle or two."

He noted, “I went to a party and saw Christians drinking wine, but it was not like on the big screen because they were drinking moderately.”

He said that he was surprised by the Christians’ keenness to drink stealthily, as they are allowed to do so and are not deemed to be committing a crime. He said their argument was that they wanted to keep it that way, so as not to disturb the conservative and Muslim Gazan community and have the authorities in Gaza backtrack on the decision to allow them to bring in alcohol.

“I think the religious differences must be respected when it comes to wine. Spiritual drinks are a personal freedom for Christians, and we should not impose on them the beliefs and laws of others,” he added.

Gaza is a community highly committed to the Islamic teachings, which forbid Muslims to drink or sell alcohol, according to the  Quran that states, “Believers! Intoxicants, games of chance, idolatrous sacrifices at altars and divining arrows are all abominations, the handiwork of Satan. So turn wholly away from it that you may attain to true success. [5:91] By intoxicants and games of chance Satan only desires to create enmity and hatred between you, and to turn you away from the remembrance of Allah and from Prayer. Will you, then, desist?” [Al-Maidah: 90, 91]

The Hamas movement, which took control of the Gaza Strip in mid-2007, destroyed all quantities of wine and liquor in Gaza. It closed down and burned all places and stores that sold alcoholic drinks. Since then, it has imposed strict control on crossings and tunnels to prevent the entry of contraband such as drugs and alcohol.

Yet Gazans occasionally find empty bottles of wine lying in the streets, which proves that alcohol is indeed found in Gaza albeit in limited quantities.

Sixteen tons of alcohol-containing chocolates were seized in the Gaza markets in mid-2020 and destroyed. The authorities in the Gaza Strip are not lenient with drug or alcohol dealers and they issue death sentences against major drug dealers.

Al-Monitor spoke with a 61-year-old Orthodox Christian from Gaza who has been producing wine at his home for 23 years.

“Last August, as the grape season came to an end, I resorted to using grapes located inside the Gaza Strip, specifically in the Sheikh Ijlin area, as it is now difficult to import Hebron grapes. I buy 60 kilograms [132 pounds] of black grapes, squeeze them and add certain amounts of sugar and yeast, and then I bring a medium-sized barrel and take out a tube from it and connect it to an empty bottle to ensure that air comes out of it without any oxygen entering so that it wouldn’t spoil,” he said.

He noted, “After about a month and a half, the grapes get fermented. I open the barrel and taste the wine, then I fill the bottles I have, close them tightly and store them in a dry place."

As for the stores that would sell alcohol and spirits, he said, “Before the 1987 uprising, I would go and buy bottles of wine, as they were publicly available and licensed by the government. In 2003, it was possible to find stores that sold them secretly to Christians and foreign workers in international institutions. But after 2007, the Hamas movement took control of the Gaza Strip and a conservative Islamic rule prevailed, leading some people to secretly produce alcohol at home for fear of being pursued.”

He added, “I only drink alcohol during festive seasons and at wedding parties, or when I have a stomach ache. I never get tipsy or drunk."

A Christian employee of an international organization told Al-Monitor, “We manufacture alcohol at home, but we neither sell it nor have it in public, and we only drink it on special occasions and at weddings. We live in a conservative society under the rule of Hamas.”

She said, “Christianity does not forbid wine and alcohol, for the Bible says, ‘Wine that gladdens the heart of man, oil that makes his face shine, and bread that sustains his heart.’ [Psalm 104:15] We only drink moderately and we neither get tipsy nor drunk."

Kamel Ayad, director of public relations at the Orthodox Church in Gaza, told Al-Monitor, “The Holy Bible forbids drunkenness on wine and places drunkards at the same levels as adulterers and thieves. ‘Do not be deceived. Neither the sexually immoral, nor idolaters, nor adulterers, nor men who submit to or perform homosexual acts nor thieves, nor the greedy, nor drunkards, nor verbal abusers, nor swindlers, will inherit the Kingdom of God,’ the Bible says,” (1 Corinthians 6:9, 10).

The bible also says, “Do not get drunk on wine, which leads to reckless indiscretion. Instead, be filled with the Spirit,” (meaning the Holy Spirit) (Ephesians 5:18).

An official source at the Gaza Strip crossings said in a press statement, “There is a Palestinian law that allows the entry of a specific amount of alcohol with each individual, and it applies to cigarettes and shisha tobacco, but due to the situation in Gaza alcohol is only brought to the Christian community.”

He added, “Christians in Gaza, as well as foreigners, including those working in international institutions, are allowed to enter certain quantities of alcohol provided they are not destined for trade. It is not true that alcohol at the crossings is allowed into Gaza, as the thousands of wine bottles seized at the crossings are destroyed.”

While the Palestinian Revolutionary Penal Code of 1970, which does not apply to civilians, stipulates “a penalty of imprisonment or a fine of 10 [Egyptian] pounds in the event that a drunk person is found in a public place, and this penalty is increased if the state of intoxication is associated with rioting.”

The Sale and Manufacture of Liquor Law of 1927, which falls within the “British positive law applicable at the time of the Mandate of Palestine,” stipulated that a person may not acquire a device for distillation or engage in the manufacture of alcohol, unless holding a license, and such licenses cannot be currently granted in the Gaza Strip.