The 47-member council has agreed to invoke a rarely used mechanism against Turkey over its failure to release philanthropist Osman Kavala. 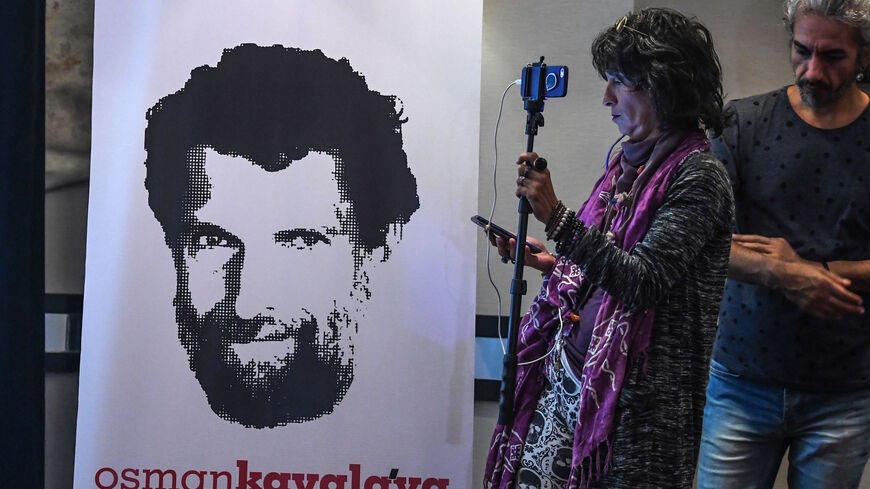 A journalist stands in front of a poster featuring jailed businessman and philanthropist Osman Kavala during a press conference of his lawyers on Oct. 31, 2018. - OZAN KOSE/AFP via Getty Images

The Council of Europe has initiated rarely used infringement proceedings against Turkey after Ankara’s failure to release businessman and philanthropist Osman Kavala despite a European Court of Human Rights’ judgement ordering his immediate release.

The procedure may eventually lead to withholding Turkey’s voting rights in the council or even suspension of its membership. The latter would mean breaking one of the key links of Turkey, whose accession talks with the European Union have been at a standstill for years, to European institutions.

The Council of Europe's Committee of the Ministers, which concluded its three-day meeting on Dec. 2, voted overwhelmingly to initiate infringement proceedings, Euronews reported from Strasbourg. The committee, which consists of permanent representatives of the 47 member states, will make an official statement tomorrow, Dec. 3.

Euronews said that more than the necessary two-thirds voted for starting the process against Turkey. It was not immediately reported which countries voted on the side of Turkey, but it was previously reported that Azerbaijan, which faced a similar procedure in 2017 for keeping an opposition deputy behind bars, would vote against the infringement proceedings.

An official notification will be issued to Ankara requesting a response within a specified time period. Press reports say that the deadline will be Jan. 19 — two days after Kavala’s next trial on Jan. 17.

Turkey's Foreign Ministry immediately called on the council to refrain from taking the proceedings any further and to respect the independence of the Turkish judiciary.

Imposing sanctions on Turkey “is not an overnight process,” Oguz Demiralp, a former envoy to the European Union and to the Council of Europe, said in an interview organized by Ankara Policy Center, a Turkey-based think tank. “But the initiating of the procedure — particularly if there is a suspension of its membership — would mean a break-off in Turkey’s link with the European legal system.”

Kavala has spent the last four years behind bars without conviction, despite repeated calls for his release. On Nov. 26, days before the Council of Europe meeting, a court ruled to continue his detention. The decision came after a diplomatic standoff between Turkey and its Western allies, whose ambassadors extended a public call to Ankara on Oct. 18 to “secure his urgent release" in line with the rulings of the European Court of Human Rights.

He was first arrested in November 2017, accused of organizing the nationwide Gezi Park protests that erupted in Istanbul in 2013. In February, the 63-year-old Kavala was acquitted of the protest-related charge, but rearrested hours later on charges of spying for the United States and aiding in the attempted 2016 coup that sought to topple Turkish President Recep Tayyip Erdogan. Kavala denies all the allegations and refuses to go to court on the grounds that he is not facing a fair trial.