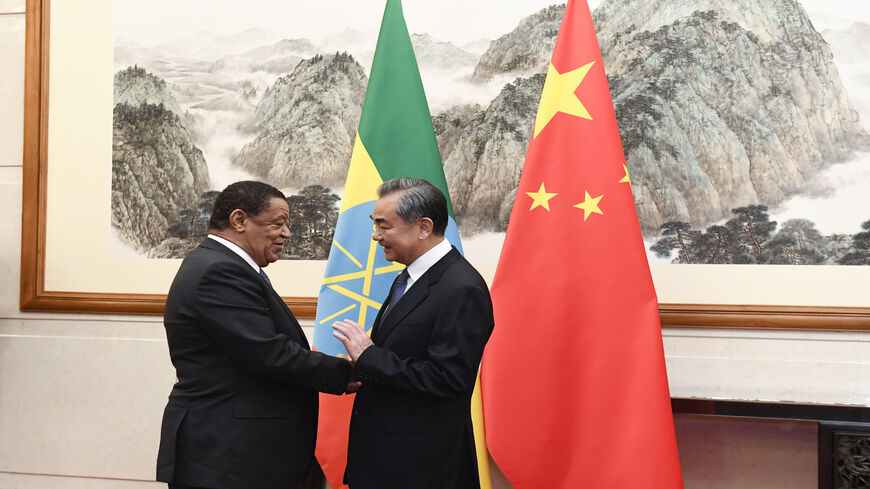 In turn, Mekonnen reiterated the Ethiopian government's commitment to fostering robust ties with China and playing a pivotal role in bilateral and multilateral fields.

The next day, Egyptian figures rushed to criticize the visit. Maj. Gen. Ahmad al-Awadi, chairman of the Egyptian parliamentary committee on defense and national security, stressed his country’s rejection of any move that would undermine peace and security in the region.

Commenting on this issue, Samir Ghattas, a former parliament member and head of the Middle East Forum for Political and Strategic Studies, noted that China was and still supports the Ethiopian regime with all its might, militarily and politically.

He told Al-Monitor, “China does not want the Ethiopian regime to collapse or fall at the hands of rebel groups in the country. These Chinese diplomatic moves do not target Egypt, but rather aim to preserve the Chinese interests in Ethiopia, especially since the fall of the Ethiopian regime would threaten China’s interests.”

According to the China Africa Research Initiative at Johns Hopkins University, Ethiopia borrowed $13.7 billion of the $148 billion in loans that China advanced to African countries between 2000 and 2018. Around 500 Chinese companies operate in Ethiopia with investments exceeding $1.5 billion.

On March 6, China and Ethiopia inked a memorandum of understanding on establishing a security safeguarding mechanism for major projects under the Belt and Road Initiative in Ethiopia. The memorandum was signed in the Ethiopian capital Addis Ababa between the Commissioner-General of the Ethiopian Federal Police Demelash Gebremichael and China’s  Ambassador to Ethiopia Zhao Zhiyuan.

At the signing ceremony, Gebremichael asserted the deal will enhance safety and security in major development projects in the African country.

Also on Sept. 2, oryxspioenkop website on security and defense affairs, published a report on China’s supply of unmanned aerial vehicles to Ethiopia in support of Ahmed in his war against rebel groups, spearheaded by the Tigray People's Liberation Front.

Ghattas argued that Wang’s recent visit aimed to send a message to the international community, specifically to the United States, that China will back its ally, Ahmed, and will not allow his fall or the collapse of the Ethiopian regime, no matter what.

On Dec. 2, the Ethiopian Foreign Ministry spokesman, Ambassador Dina Mufti, talked about a secret in collaboration with foreign countries to overthrow Ahmed's constitutionally elected government. He bashed the interferences in the internal affairs of a sovereign state, in violation of the Charter of the United Nations and the Charter of the African Union.

On Dec. 6, the United States and five other countries — the United Kingdom, Australia, Canada, Denmark and the Netherlands — issued a statement condemning the arrests carried out by the Ethiopian security forces of thousands of citizens, on the basis of their ethnicity. The statement urged the Ethiopian government to immediately stop these practices.

“China has greatly succeeded in subjugating the Ethiopian side, challenging the US presence in Ethiopia through its unlimited support for the Ethiopian government and creating areas of strength in the Horn of Africa,” Ghattas said. “Of course it will not give up those gains easily.”

On the impact on Egypt of the recent Chinese diplomatic moves, Ghattas said, “There is a state of Egyptian resentment toward these moves. Provoking chaos and the continuation of the civil war may turn Ethiopia into a land of war by proxy, threatening the Egyptian national security and the disputed GERD area between Egypt, Sudan and Ethiopia.”

He expected Egypt to resort to diplomatic means to pressure China in the coming days, amid its continued support for Ahmed's government, through rapprochement with the United States. This comes in light of the fierce competition between the two countries and the conflict between them in the region.

Al-Monitor spoke to Ali el-Hefny, former deputy foreign minister, former Egyptian ambassador to Beijing and member of the Egyptian Council for Foreign Affairs. “China is looking out for its interests, and this does not mean that it is siding with Ethiopia or distancing itself from Cairo. China sees Ethiopia as a country with a pivotal and central role in the Horn of Africa while understanding the major regional weight of Egypt,” he said. “China wants to achieve its interests regardless of any other considerations.”

He ruled out any strains on the Egyptian-Chinese relations as a result of China’s support for Ahmed. Hefny argued, “China would try to gain Egyptian support by strengthening economic cooperation with Cairo, lest the relations between the two countries be affected. Despite the Chinese support for Ahmed, Beijing is keen on consolidating its relations with Egypt, given that Egypt is a regional power and a pillar of investment in Africa.”

On Dec. 2, Chinese Ambassador to Cairo Liao Liqiang recognized Egypt as a major strategic partner in many fields, affirming his country will expand cooperation with Cairo, with the aim of achieving common development.

On Feb. 25, the Chinese Embassy in Cairo indicated China has been the most active investor in Egypt in recent years. According to statistics from the Ministry of Commerce of China, China's new direct investment in Egypt jumped by 134, hitting an all-time high of $89.33 in the first quarter of 2021.