Egyptian Foreign Minister Sameh Shoukry briefed his Chinese counterpart Wang Yi on the latest developments in the Grand Ethiopian Dam crisis — a move that observers believe is aimed at pushing Beijing to pressure Addis Ababa on the dam negotiations. 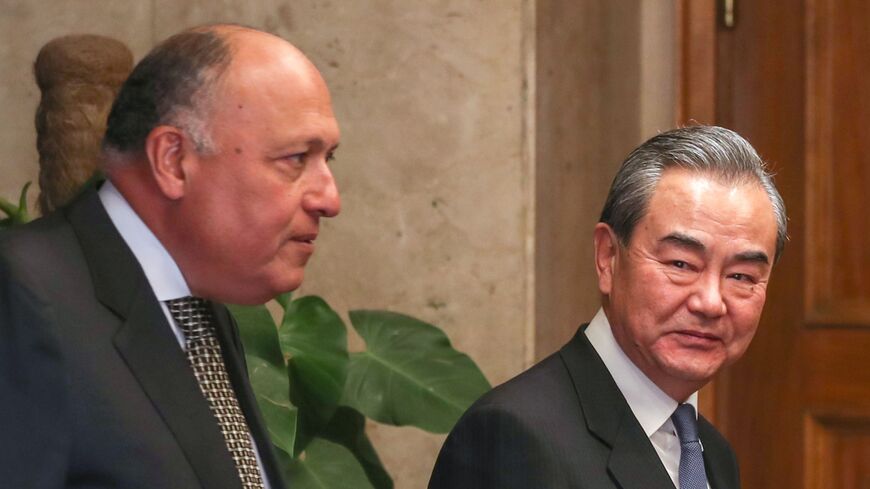 A statement by the Egyptian Foreign Ministry was released the same day, saying the call between the two senior diplomats involved a “long and in-depth conversation on the GERD at all levels.”

China’s involvement in the dam issue came in the wake of Shoukry’s letter June 12 that he addressed to the United Nations Security Council president, in which he objected to Ethiopia’s announcement that it would initiate the filling of the dam during the flood season in July.

In a speech delivered May 31 during a virtual symposium held by the Chinese Embassy in Cairo on the occasion of the 64th anniversary of the establishment of diplomatic relations between Cairo and Beijing, Omar Semeida, the head of the Conference Party and head of the party’s parliamentary bloc in the Senate, called on China to “exercise more diplomatic pressure on the Ethiopian government in a bid to spare the entire region any risk of instability and to sign a legally binding agreement with the downstream countries, i.e., Sudan and Egypt.”

Ali el-Hefny, a former deputy foreign minister and former Egyptian ambassador to Beijing, told Al-Monitor, “China is a permanent member of the UN Security Council, and it is only normal for Egypt to coordinate with it and clear up Cairo’s position vis-a-vis the dam crisis. Egypt also confirmed that it continues to seek a binding and balanced legal agreement that would achieve the interests of the three parties.”

“China could play a good role in persuading Ethiopia to let go of its intransigent positions and to show greater flexibility in the GERD talks with Sudan and Egypt under the auspices of the African Union [AU], within the framework of Beijing's relations and major interests with Addis Ababa." He said China is one of the largest contributors to development and investment projects in Ethiopia.

Hefny said Cairo is hoping that Beijing will play a role in the negotiations that are expected to be held in the coming period at the Security Council to discuss the dam, in a bid to push Ethiopia to sign an agreement that would regulate the filling and operation process of the dam in such a way to reassure the two downstream countries in relation to their future interests in the Nile River.

“Cairo maintains strong relations with Beijing, which have developed significantly during the recent period. The two countries share a network of common interests, which is reflected in the number of joint projects implemented by Chinese companies in Egypt. This is not to mention that the Chinese market is open to Egyptian exports and vice versa, something that has increased in the past few years,” he said.

Chinese ambassador to Cairo Liao Liqiang said in a press conference May 27 that China has been Egypt’s main commercial partner for the eighth year in a row; trade between the two countries exceeded $14.5 billion in 2020.

Liqiang added that the volume of new investments from last year amounted to $190 million, bringing the total to over $1.2 billion.

Nadia Helmi, a professor of political science at Beni Suef University in Egypt and an expert on Chinese and Asian affairs, told Al-Monitor, “The three parties to the dam crisis are allies with China. This would allow Beijing to employ its economic and diplomatic influence to help find a solution to the GERD issue and to alleviate tensions that have been running high for several years now, as well as to play a major role in the AU-mediated talks.”

“Beijing has indeed several pressure cards on Addis Ababa to persuade it to reach an agreement with Egypt and Sudan. China has several huge projects in Ethiopia and has already granted Addis Ababa loans to build the dam,” she explained.

According to a report by China’s Asia Times on Jan. 19, Beijing “has a major stake in the project through the extension of a $1.2 billion credit facility to finance the dam’s transmission lines,” which is part of “some $16 billion in Chinese loans to Ethiopia.”

Helmi, however, said, “China is concerned about interfering … in the crisis as it holds investments in the three concerned countries. Also, no party has officially requested that Beijing mediate. Sudan saw that the AU mediations did not yield any results, prompting Khartoum to seek more mediators, but did not mention China.”

Most importantly, according to Helmi, China believes that its investments in the three countries could be jeopardized should things escalate into an armed conflict — something that could hinder these countries to stop fulfilling their financial obligations toward Beijing.

Ayman Samir, an international relations expert working with the Egyptian Al-Ahram newspaper, told Al-Monitor via a phone call, “Egypt is banking on the roles of major powers such as China, which has many large investments in Ethiopia and holds good relations with Ethiopian Prime Minister Abiy Ahmed, to persuade Addis Ababa to stick to negotiations and respect the international law as the only way to reach a satisfactory solution to all concerned parties.”

But he said, “It would be difficult for China to influence Ethiopia’s position or to push it to show more flexibility in the talks. The standoff between Addis Ababa and Cairo has been going on for 10 years, and so far, we haven’t seen Beijing making a clear effort to bring views together.”

“In my opinion, the United States is the only party that could make a breakthrough in the crisis,” he said.

Samir added, “China may think that putting forward an initiative aimed at resolving the crisis could undermine its policy of taking the same stance vis-a-vis all concerned parties or threaten its investment. This is why, I think, China continues to distance itself from the crisis.”