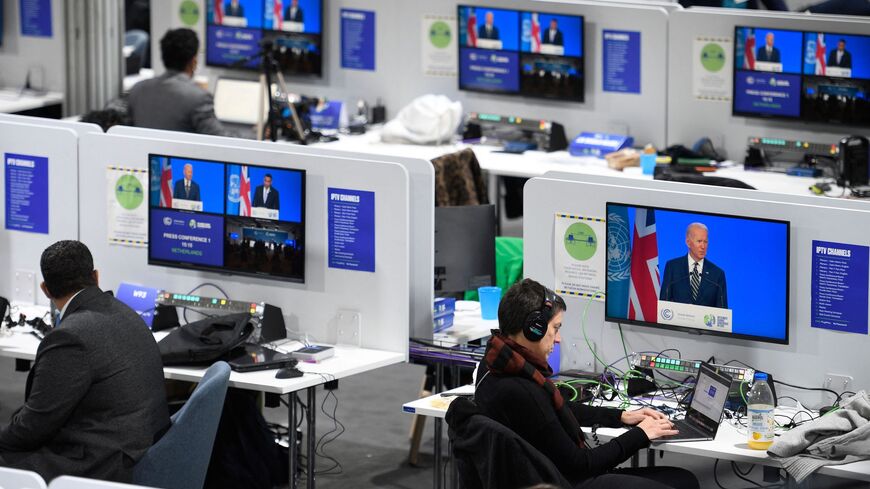 Journalists take notes as they listen to US President Joe Biden present his national statement as part of the World Leaders Summit of the COP26 UN Climate Change Conference in Glasgow, Scotland, on Nov. 1, 2021. - OLI SCARFF/AFP via Getty Images

“These were the routine protocol standards that were always applied to us and to all other leaders on all our international visits. However, we were told at the last moment that these could not be met,” the Hurriyet Daily News quoted Erdogan as saying.

“We later learned that the standards in our rejected request could exceptionally be provided for another country. It didn’t conform to diplomatic customs, either. We could not accept this,” he said, declining to name the other country.

A senior Turkish official clarified to Reuters that the security dispute partly involved how many vehicles Turkey would bring.

Erdogan told reporters last week that he would meet with Biden in Glasgow, but the pair ended up meeting on the sidelines of the G20 summit in Rome on Sunday instead. A White House statement said Biden and Erdogan discussed Turkey’s request to purchase F-16 fighter jets, the war in Syria and human rights.

In late September, Turkey requested to buy 40 US-made F-16 fighter jets and nearly 80 modernization kits for its existing aircraft. Ankara says the purchase could help recoup the $1.4 billion investment it made into F-35 jets before Washington booted Turkey from the Joint Strike Fighter program in 2019 over its acquisition of Russia’s S-400 missile defense systems.

Erdogan said Biden told him there was a “50/50” chance that Congress will approve the F-16 sale but that he would do “his best” to make it happen.