New arrests have been reported as the United Nations holds an emergency session on the coup in Khartoum. 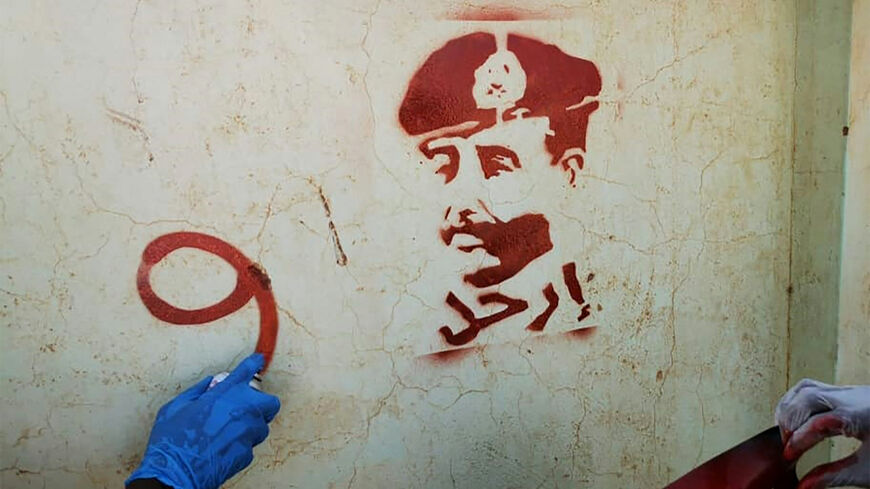 A Sudanese citizen sprays a stencil painting of the Gen. Abdel Fattah al-Burhan with writing in Arabic that reads "leave" during a protest in the streets of the capital Khartoum, amid ongoing demonstrations against a military takeover that has sparked widespread international condemnation, on Nov. 4, 2021. - AFP via Getty Images

Michelle Bachelet urged Sudan’s military leaders “and their backers” on Friday to “step back in order to allow the country to return to the path of progress towards institutional and legal reforms.”

Bachelet slammed the Sudanese military’s use of force against protesters. At least 13 people have been killed and more than 300 injured since last Monday’s military takeover, according to the Associated Press.

The commissioner’s condemnation came during an urgent session of the rights body in New York on Friday.

Nearly two weeks since the coup, most the transitional government officials detained have yet to be freed. About 25 officials are facing charges under the junta, an attorney for deposed officials told Al Jazeera.

Prime Minister Abdalla Hamdok remains under house arrest and has reportedly refused to front a new government selected by military leadership, which would violate Sudan’s 2019 constitution.

Hamdok remains under armed guard but has been allowed to meet with international diplomats attempting to mediate a way out of the crisis.

“Events since the coup have recalled a somber page in the country’s history when freedom of expression was stifled and human rights were comprehensively repressed,” Bachelet said, drawing a contrast to coup leader Gen. Abdel Fatah al-Burhan’s claims that he was placing Sudan’s 2019 pro-democracy revolution back on track.

Burhan received a phone call from US Secretary of State Antony Blinken yesterday. Blinken called for an immediate release of Sudanese officials, an end to the military’s state of emergency and a return to the joint civilian-military transitional government process, according to the State Department.

Washington has pushed for international pressure against the coup, freezing billions in debt relief previously set aside for the country’s planned transition to democracy.

US officials are hoping heavy economic pressure and broad international opposition to the coup will convince Sudanese military officials to reverse course.

“There are positive incentives, but there are also potential and real repercussions" if Sudan's coup leaders do not reverse course, State Department spokesperson Ned Price said Thursday.