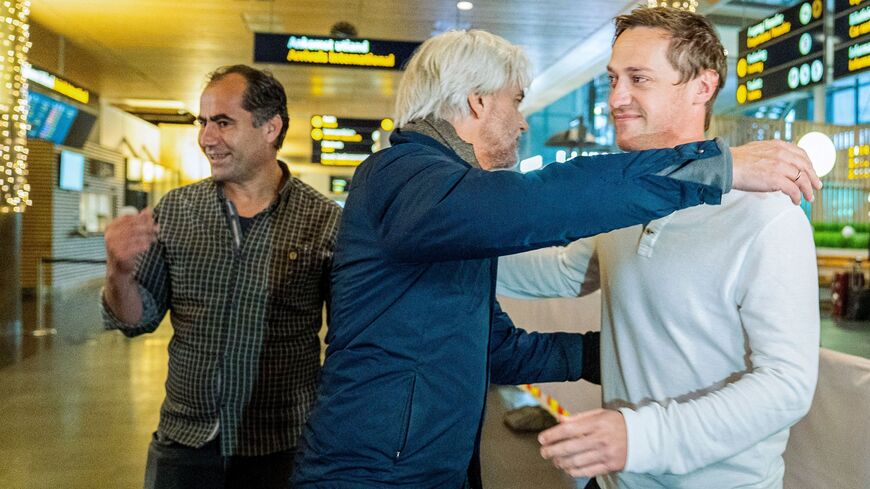 Norwegian journalists Halvor Ekeland (right) and Lokman Ghorbani (left) are welcomed by head of NRK sports Egil Sundvor in Gardermoen on Nov. 24, 2021, after returning from Qatar, where they were arrested in connection with a reportage trip. - HAKON MOSVOLD LARSEN/NTB/AFP via Getty Images

Qatari has released two journalists from Norway who were arrested while reporting on poor working conditions for migrants building infrastructure for next year’s FIFA World Cup, their employer said Wednesday.

Halvor Ekeland, a sports reporter for public broadcaster NRK, and Lokman Ghorbani, an NRK photographer, were in the small Gulf country to report on preparations for football’s biggest tournament.

NRK reported that the pair were arrested outside their hotel and held for more than 30 hours. Qatari security forces reportedly confiscated their equipment and forced them to delete their footage.

Doha has faced criticism over its treatment of migrants, who comprise a majority of Qatar's population. Rights groups say countless stadium workers have died on the job due to poor labor conditions. Qatar has pushed back on the criticism and points to several landmark labor reforms the country has enacted since winning its bid in 2020 to host the World Cup.

In a statement Wednesday, the Qatari government accused Ekeland and Ghorbani of trespassing on private property and filming without a permit.

“They were provided with all the filming permits they had requested prior to their arrival and were offered meetings with senior government and third-party officials,” the government communications office said. “These freedoms, however, do not override the application of common law, which the crew knowingly and wilfully violated.”

“A free press is crucial in a functioning democracy,” he tweeted. “I am very happy that Halvor Ekeland and Lokman Ghorbani have now been released.”

The Norwegian foreign ministry summoned the Qatari ambassador in protest. Foreign Minister Anniken Huitfeldt told NRK that Ekeland and Ghorbani "were arrested while performing their duties as journalists.”

Reporters Without Borders ranks Qatar 128 out of 180 countries in its Press Freedom Index; Norway tops the list of having the world’s most free media.