Ethiopia has announced that it will soon finish construction work on the GERD, while Egypt has warned of the consequences of not reaching an agreement in the latest escalation between the two countries. 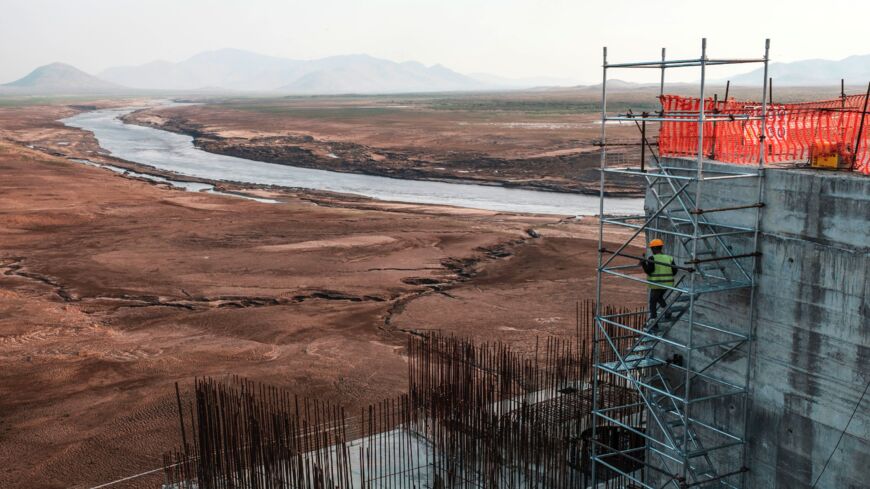 A worker goes down a construction ladder at the Grand Ethiopian Renaissance Dam near Guba in Ethiopia, on Dec. 26, 2019. - EDUARDO SOTERAS/AFP via Getty Images

An Egyptian official warned of the consequences of not reaching an agreement on the dispute over the Grand Ethiopian Renaissance Dam (GERD) that Ethiopia is building on the Blue Nile, which sparked a heated dispute with the downstream countries Egypt and Sudan.

Egyptian Minister of Irrigation Mohamed Abdel Aty said that any shortage of water will affect workers in the agricultural sector, causing security and social instability in the region and increasing illegal immigration.

After meeting with US officials in Cairo, Abdel Aty stated on Nov. 20 that his country showed great flexibility during the various stages of negotiations due to its desire to reach a fair and binding agreement on filling and operating the GERD, taking into account specific procedures to deal with various drought cases as Egypt mainly depends on the Nile River for water supply.

Abdel Aty received Matthew Parks, a water expert in the US government; Nicole Champagne, the US deputy ambassador in Cairo; and representatives of the US Embassy in Cairo. During the meeting, Abdel Aty said, “Egypt tried many times to build confidence during the negotiation stages, but this was not met with goodwill on Ethiopia’s part.”

Abdel Aty accused Ethiopia of deliberately issuing false statements about the GERD in addition to managing it individually in isolation from the downstream countries, which caused billions of dollars in material damage, in an attempt to mitigate the negative effects resulting from these unilateral measures that have disrupted the Nile River system.

He also pointed out the damage inflicted on Sudan as a result of Ethiopia's unilateral filling of the dam's reservoir in 2020, when Sudan suffered from a severe drought followed by massive floods.

Meanwhile, Kifle Horo, the GERD project manager, announced that 83% of the construction work at the GERD had been completed.

Al-Jazeera quoted Horo on Nov. 20 as saying that his country succeeded in completing the first and second fillings of the dam with 18.5 billion cubic meters of water thanks to the amount of rainfall that exceeded expectations.

Horo said his country will start producing 700 megawatts of electricity from the GERD next year. This information was also confirmed by Ethiopian Minister of State for Communications, Information Technology and Digital Economy Houria Ali Mahdi, at the online Africa Tech Festival conference in mid-November when she said that this step would increase Ethiopia’s electricity generation capacity by 14%.

Abdel Aty expressed his astonishment at Ethiopia's claim that it is obliged to unilaterally fill the dam as a construction necessity and for the purpose of generating electricity, saying that this was not true.

Ethiopia has repeatedly failed to deliver on its promises to start generating electricity from the GERD. Addis Ababa officials had hoped that electricity would be generated from the dam by the end of October 2020, to no avail. Ethiopia’s electricity production capacity is currently 4,967 megawatts.

Egypt, Sudan and Ethiopia are locked in a bitter dispute over the GERD, and negotiations have reached a stalemate amid mounting fears of a military conflict in an already volatile region.

Ethiopia says the $5 billion dam will make it Africa's largest energy source, which is essential to its economic development. Egypt and Sudan fear that the GERD will limit the supply from the Nile River on which they depend for most of their water needs.

The African Union’s (AU's) continuous attempts since June 2020 have failed to broker a deal to end the stalemate in the negotiations. The last round was held in Kinshasa, the capital of the Democratic Republic of the Congo, in April, but did not lead to an agreement on relaunching negotiations. The parties then exchanged accusations of obstructing the talks.

On July 19, Ethiopia announced that it had completed the second filling to generate hydroelectric power, despite Egypt's and Sudan's rejection of the unilateral decision.

This Ethiopian move came after months of diplomatic escalation that culminated in repeated Egyptian threats to carry out military action against the dam if Addis Ababa took this step.

In mid-September, the Security Council issued a statement calling on the three countries to resume negotiations in a constructive and cooperative manner under the auspices of the AU “to urgently finalize the text of a binding and mutually acceptable agreement on filling and operating the GERD.”

The Democratic Republic of the Congo, current chair of the AU, has since sought to urge the three countries to resume negotiations, but without making any progress.

The possibility of resuming negotiations was further complicated by the turmoil in Sudan, as Sudanese Gen. Abdel Fattah al-Burhan led a military coup on Oct. 25. This prompted the AU to suspend Sudan's membership and freeze its participation in all AU activities.

Ethiopia is accused of pushing for the freezing of Sudan's AU membership to find a logical reason for the international community to postpone the GERD negotiations for a later time.

Meanwhile, Ethiopian Prime Minister Abiy Ahmed is facing an existential struggle because of the Tigray war, which has become a threat to the survival of his regime.

Paul Sullivan, a nonresident senior fellow with the Atlantic Council’s Global Energy Center, told Al-Monitor that without a long-term agreement with flexibility built in to take into consideration the effects of any years of low rain, Egypt's water security will remain at risk.

Sullivan said, “Having an uncertain source of the Nile's water in Ethiopia means that Egypt will have to make up for the possible losses via demand management, water reuse and desalination. However, the desalination plants carry their own risk, especially if Egypt relies a lot on them, as Saudi Arabia does, in the future."

Cairo has allocated $50 billion to make up for any potential water shortages as a result of the construction of the GERD through a strategy to manage water resources until 2037.

This strategy depends on establishing secondary and tertiary water treatment plants, in addition to localizing seawater desalination technology, rationalizing the use of available water resources and raising the efficiency of the irrigation system.

Following a meeting with US Secretary of State Anthony Blinken in Washington on Nov. 8, Egypt's Foreign Minister Sameh Shoukry called on resuming negotiations “as soon as possible.”

Egyptian President Abdel Fattah al-Sisi later said that reaching an agreement on the GERD issue would enhance security and stability in the region as a whole, achieve the common interests of all parties and open up prospects for cooperation among the Nile Basin countries.

Egypt is pushing to include transboundary water conflicts in the international climate talks since Cairo will host the COP27 climate summit scheduled for November 2022.

“Climate change results for the downstream countries of the Nile will be as they will be. However, with a country that may magnify those changes by holding back water for their own people, Egypt and Sudan could have a much more difficult water future than they previously planned for,” Sullivan said.

“If climate changes bring about even less rain in the water tower of Ethiopia, the tensions building toward conflict within Ethiopia and between Ethiopia, Egypt and Sudan will get worse.”