Meet the foreign women living in Gaza against all odds

The foreign women residing in the Gaza Strip have adapted to another culture and difficult living conditions, and often have chosen not to travel to their home countries but remain with their families during wartime. 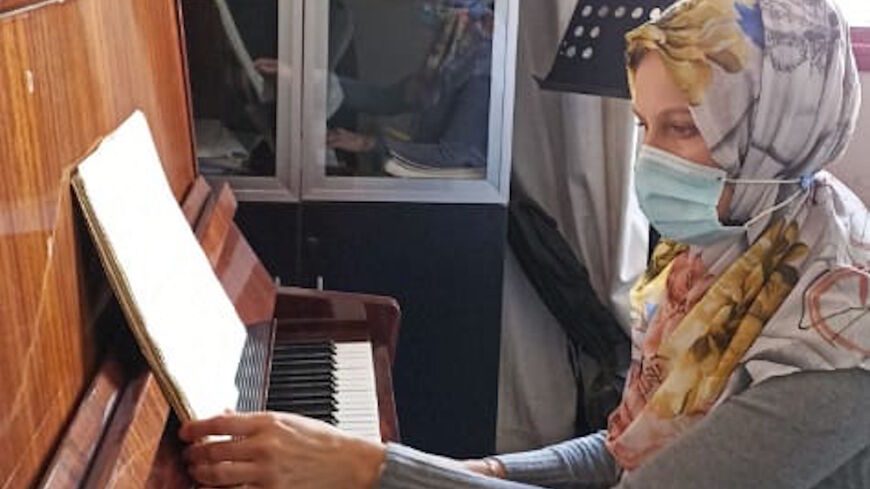 Hundreds of foreign women live in the Gaza Strip, despite the conservative society and different culture than their own. They decided to settle permanently in the besieged enclave, despite all the unfavorable circumstances.

Although exact figures are hard to come by, statements from embassies and foreigners living here place the number of non-Arab residents well above 1,000. Many of those who spoke to Al-Monitor came to Gaza after marrying locals. They have managed to integrate into Gazan society and in most cases have started a family. They lived through the Israeli wars that are waged on Gaza and endure the multiple and complex crises that have hit the enclave over the years.

Elena Radwan is a violin instructor at the Edward Said National Conservatory of Music. She hails from the city of Voronezh in southwestern Russia and graduated from a private institute for talented musicians in Russia. She is married to a Palestinian surgeon, Issam Radwan, with whom she has three children.

Speaking to Al-Monitor, Radwan said, "After we got married we left Russia to settle in the Gaza Strip in 2005. At first, we stayed for some time in the city of Rafah in the southern Gaza Strip, and then we moved to Gaza City. At that time, I noticed that there were no music schools in the city and I started giving private violin lessons. After a while, I joined the United Nations Relief and Works Agency for Refugees before starting work with the Edward Said National Conservatory of Music in 2006.”

Radwan told Al-Monitor that despite the cultural differences she feels comfortable in Gaza. “There was never a moment when I felt suffocated or estranged here,” she noted.

Radwan has lived through the wars that were waged on the Gaza Strip. She said that the Russian Embassy always communicates with their nationals to secure their protection. “The 2008 war was very difficult. An apartment in the building where we live was targeted and we were forced to vacate our home. When the military operations stopped, we returned to our apartment and found it significantly damaged,” she said.

In times of war, foreign embassies reach out to their nationals inside Gaza to ask them if they want to leave. Embassies would contact the International Committee of the Red Cross (ICRC), which would set up a safe corridor that allows foreigners to move to the border crossing and travel to their country of origin.

Many foreigners, especially from countries that were formerly known as Eastern Europe — such as Russia, Ukraine, East Germany, Poland and Hungary — have relocated to the Gaza Strip, while young Palestinians leave Gaza to pursue their studies at the universities in those European countries. Many of them end up marrying women from these countries and returning to the Gaza Strip. The Ministry of Interior and director of foreigners affairs in Gaza have not provided exact figures to the media so far.

The media coordinator at the Russian Embassy, Tariq Alyan, told Al-Monitor, "The Russian Embassy provides assistance to any foreign woman residing in Gaza — from the countries of the former Soviet Union or Eastern Europe — if she requests assistance to travel during military operations. As for the number of Russian residents and their children, there are approximately 1,200 Russian citizens in the Gaza Strip. During the last war, 200 Russian citizens traveled to Russia and a large number of them have returned.”

Svetlana Haddad is a Ukrainian Muslim woman from Vinnytsia and married to a Palestinian doctor residing in the Gaza Strip with their six children. She moved to Gaza in 1998 after she got married. Haddad has a master’s degree in obstetrics from a Ukrainian university and has worked at Al-Quds Hospital in Gaza City, but she decided to stay home to raise her children.

She told Al-Monitor, “My husband’s family members are very kindhearted and helpful. They taught me to speak the local dialect and introduced me to the prevalent customs and traditions in the Gaza Strip. I quickly adapted to the conservative Palestinian society. This helped me adjust easily and overcome any difficulty I had leaving my own family and moving to another country with a different environment and culture.”

She said, “Family ties in Palestinian society are very strong, unlike in Western societies; family ties are waning due to the openness and dynamics of society in Ukraine.”

Like all Palestinians, Haddad was affected by the humanitarian crises that have crippled all aspects of life in the Gaza Strip. “I had my share of suffering from the acute power crisis and the lack of basic resources in the blockaded enclave,” she noted. “The last time I traveled to visit my family in Ukraine was in 2008.”

Although foreign embassies facilitate the travel of their nationals in times of war through a safe corridor under the supervision of the ICRC, Haddad never left the Gaza Strip during wartime. The ICRC did not provide Al-Monitor with any statistics pertaining to the number of travelers through such safe passages.

“The 2008 war broke out on my birthday, on Dec. 27. I wanted to stay with my family in Gaza, even though I was able to leave through the safe passage for foreign nationals at that time,” she said. “The Ukrainian Embassy contacted us to secure our exit from the area of hostilities, but I did not leave. This scenario was repeated in the subsequent wars, but I always chose to stay with my husband, my children and my family here.”

She recalled how horrifying the offensives on Gaza were, especially for her children who were terrified by the bombings and the scenes of destruction and death. “But I was brave and patient and endured all that,” she concluded.