Integration is difficult for the many women from the former Soviet republics who have settled in Gaza with their Palestinian husbands. 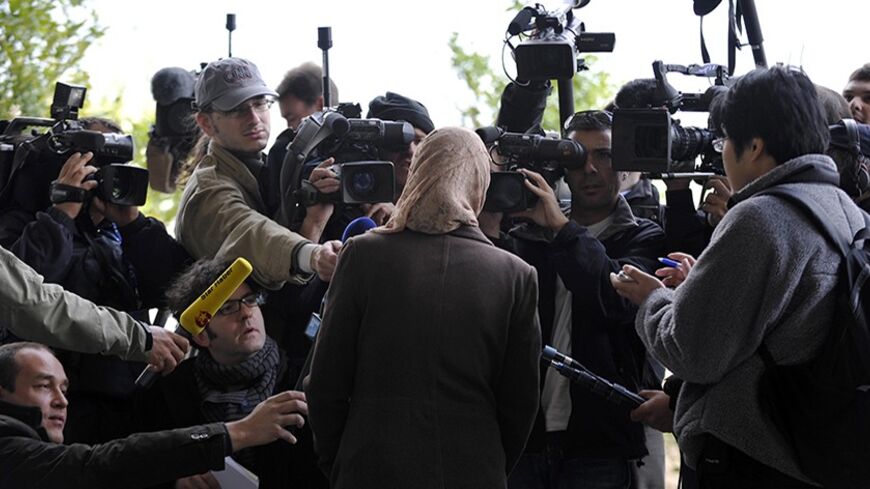 A Russian woman married to a Palestinian speaks to the media at the Erez border crossing after leaving the Gaza Strip, Jan. 2, 2009. - REUTERS/Amir Cohen

GAZA CITY, Gaza Strip — "I miss the scent of the forest. Sometimes, I feel that I can smell it." This is what Svetlana Birova misses most from "Mother Russia" after 20 years of not leaving the Gaza Strip, even for short trips.

"Although I miss my country, I consider my homeland to be where my husband, my son and my daughter Miriam are. I remember the difficulties I faced in the first years here because of the difference in cultures, but, with the help of my husband, I resisted homesickness," Birova said.

Birova isn't the only Russian here in Gaza: There are more than 80 Russian women married to Gazan men living in the Strip. This is in addition to hundreds of other women from former Soviet states, according to the Compassionate Hearts Association, which is concerned with the affairs of these women.

Birova and her husband, Fadel Ashour, spoke to Al-Monitor in a cafe that they have frequented in the evenings for many years. "Whenever I see a new Russian wife arrive in Gaza, I feel the foolishness of her decision. I imagine the difficulties she will face, regardless of her beauty and her university degree. Here, Russian wives have no protection," she said.

"Sometimes, people have the impression that foreign women are easy. Problems arise if the husband of the Russian woman is influenced by this view, and thus puts more restrictions on his wife or his daughter," she added.

Fadel said that his wife was one of the first of seven Russian women to arrive in Gaza. According to him, the first was Elena Elbarkoni, who came in the 1970s. He explained that the history of the Russian presence in Palestine goes back to the time of the former Soviet Union, when Palestinian students who had studied there would return with wives. There were only a few such women until the fall of the Soviet Union, when there was an opening up and many more Palestinian students were accepted into universities in Russia.

For her part, Russian national Elena Nasrallah, 36, said that what annoys her the most are attempts to impose local traditions and orders on her and her daughters. "I always dream about settling down in Russia with my daughters, but even if I wanted to do that, [the authorities] wouldn't allow me to travel with them," she told Al-Monitor.

Unlike some mothers from other foreign countries who quickly leave the Strip, Russian wives and mothers are known for staying a long time. Anna Ashour, 40, arrived in Gaza in 1997 and has only left for a few visits to Russia. "We were raised to consider children something very important in life. We can't leave them in another country, since they are our responsibility. Thus, many Russian mothers sacrifice everything to stay with their children," Anna said.

During a meeting with Al-Monitor in her beauty shop in Gaza City, Anna said, "The things I miss the most from Russia are the trees and nature and, of course, Russian food. I dream of eating blini [buckwheat pancakes]. I have, however, traveled back to Russia with my children multiple times, since I'm my parents’ only child."

Anna knows the names and stories of many other Russian women and others from former Soviet states who live in Gaza. She feels a sense of sadness for the social reality that most of these women live. She said that one girl died during an Israeli shelling with her son, while another died alone in the hospital. A third hanged herself a few months ago, and no one would agree to bury her.

Anna’s daughter Elizabeth, 20, said that she sometimes feels that there is a conflict of cultures and she cannot comply with society, unlike the case when she is in Russia. "When in Russia, the first places I visit are archaeological sites, they always amaze me," she said.

Difficulties when it comes to integrating isn't the only problem facing Russian women in Gaza. Elena Alyan, who works for the Russian Consulate in Gaza, said that there were other problems related to travel documents. The consulate opened its doors two and a half years ago, after having been closed since 2004.

"There are still dozens of women who have yet to receive Palestinian identity cards, which makes it easy for one to leave and enter the Strip. Thus, some of them are stuck in Gaza against their will. If they leave without their children, they will not be able to return," she said, adding that the Egyptian authorities decided to allow these women to travel out of Gaza, but only if accompanied by their husbands.

She noted that other problems related to the difference in cultures and the imposition of a particular belief or type of dress on these women, exposing them to humiliation in many cases. "There are 500 Russians — including men, women and children — living in Gaza," Alyan said.

There is no Russian cultural center in the Gaza Strip that teaches the Russian language or carries out cultural activities, unlike in the West Bank, where there is a Russian museum, school and cultural center.

Alyan said there are many Russian women who go to the consulate because of problems they are suffering. She said the consulate can protect them and even help them travel back to Russia, but they can't do the same for their sons or daughters. "We are governed by the family system and local laws that stipulate a father must give permission for his children to travel. There are some husbands who completely refuse for their children to obtain Russian nationality, out of fear they will leave. This is especially true for daughters. Others, however, do the complete opposite: [As soon as they are married] they try to get [their children] Russian nationality," she said.

Alyan said that the consulate has nothing to do with the religion Russian women choose. Each citizen is free to profess any religion he or she wants, according to Russian law.

Al-Monitor met with Mohammed Badawi, the head of the board of directors of the Compassionate Hearts Association, at the association's headquarters in Gaza City. Badawi, who is married to a Ukrainian woman who helps him to manage the association, said that they are concerned with foreign wives, especially those from former Soviet states. He said that the number of such women in Gaza, including their children, is more than 4,000. "The majority are from Russia and Ukraine, and then from Belarus, Kazakhstan and Uzbekistan," said Badawi.

Badawi said that the majority of these women willingly converted to Islam, either because they wanted to or to please their husband and his family. However, some have remained Christians. "All of them feel homesick, so every day we organize a recreational activity so that they can come together, such as a day for cooking or embroidery," he added.

Birova, whose daughter has traveled to the United States to study and whose son will join her soon, dreams of a house for herself, her children, her husband and future grandchildren, regardless of the city it is located in. Yet, she said, "At that moment, Palestinian culture will not be the only thing that unites us. We will be united by the Russian and American cultures as well, and perhaps other cultures. We will sit at a single table that has dishes from all of these cultures."