The Royal Jordanian Naval Base at Aqaba will host the US 5th Fleet's Task Force 59 to test unmanned surface craft in the coming weeks. 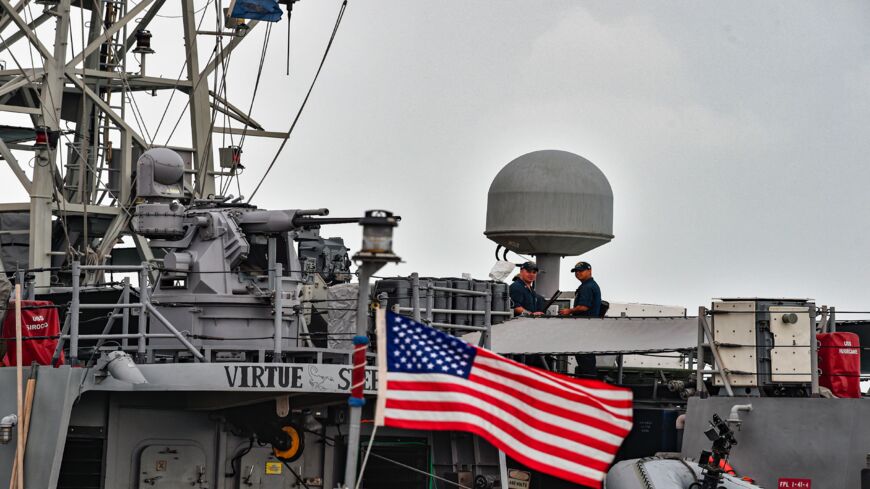 US Navy sailors stand guard aboard the USS Sirocco patrol ship while docked at the US 5th Fleet Command in Bahrain's capital, Manama, on Dec. 17, 2019. - MAZEN MAHDI/AFP via Getty Images

A Jordanian naval base at the Red Sea port city of Aqaba will become the latest hub for a new US Navy task force to test unmanned technology in Middle Eastern waters.

In the coming weeks, the US 5th Fleet’s Task Force 59 will work with members of the Royal Jordanian Navy to deploy Saildrone unmanned surface vessels via Aqaba.

The 7-meter (23-foot) wind-powered craft are designed to gather a variety of maritime data for up to a year under monitoring by remote operators.

Why It Matters: The Red Sea has seen increasing military activity by Yemen’s Houthi rebels and Iran’s navy, both of which are seen as threats by states that border the strategic waterway.

The Houthis in recent years have laid naval mines that have struck commercial ships and launched cruise missiles against US vessels in the Red Sea. American officials have said evidence indicates the weapons are supplied by Iran.

Meanwhile, Israel has pursued a sabotage campaign against Iranian petroleum transfers in the region and upped its naval activity in the Red Sea.

Jordan, which holds a treaty with Israel and remains heavily dependent on natural gas delivered via Aqaba, is a natural partner for Task Force 59, current and former officials say, as US Central Command works to build regional military partnerships following the Abraham Accords.

“We are working harder and smarter to achieve maritime security, in all domains — surface, subsurface and over the sea,” Col. Hisham Khaleel al-Jarrah, commander of the Royal Jordanian Naval Force, said alongside US 5th Fleet commander Vice Adm. Brad Cooper in Manama last week.

“The Red Sea will witness a significant increase in monitoring and power projection to maintain stability and security within international waters,” he said.

What’s Next: The US Navy has intercepted several Iranian weapons shipments believed to be destined for Yemen’s Houthis in recent years, but it can’t catch everything.

The US Navy is hoping unmanned systems will help the 5th Fleet and its regional partners to monitor the seas as the Biden administration diverts military forces to counter a rising China.