At a time when the Sadrist movement is seeking understandings with Shiite, Sunni and Kurdish parties to form a government, the forces rejecting the results of the elections are taking to the streets in protest against any Cabinet formation talks before the results issue is resolved. 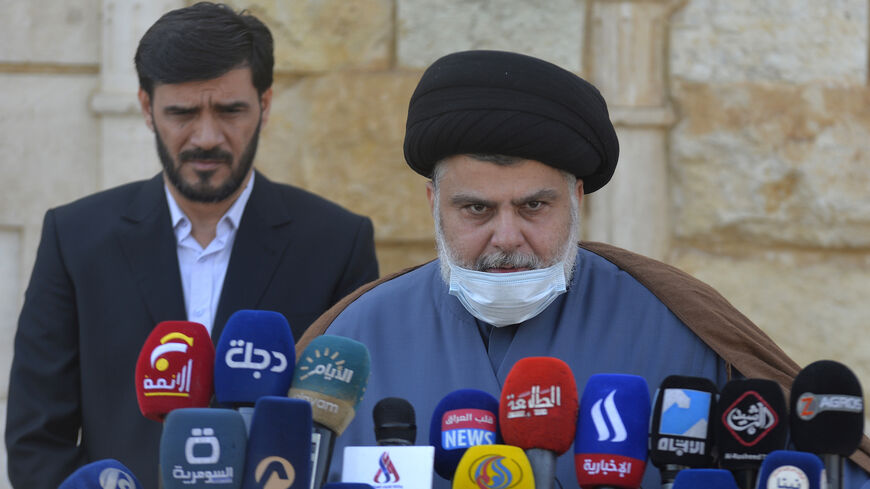 Iraqi cleric Muqtada al-Sadr delivers a statement in which he backed early elections overseen by the United Nations, in an extremely rare press conference outside his home in Iraq's holy city Najaf, on Feb. 10, 2021. - ALI NAJAFI/AFP via Getty Images

Iraq's Sadrist movement head Muqtada al-Sadr discussed on Nov. 5 his Cabinet formation with Victory Alliance head Haider al-Abadi during a rare visit by Sadr to the capital. This came after meeting with parliamentary speaker Mohammed al-Halbusi and National Wisdom Movement head Ammar al-Hakim. Sadr had become accustomed to handling political issues and making decisions while at his residence in the Shiite town of al-Hanana, west of Najaf.

Riyad al-Massoudi, a leading official in the Sadrist movement, told Al-Monitor that this visit lays the foundations “of the understandings following the elections in which the Sadrist movement was victorious compared with the other Shiite forces.” He added, “The government formation is a milestone, and [Sadr's] discussions with the Shiite, Sunni and Kurdish forces stem from his confidence that he is able to build strong political alliances and announce the formation of a new Cabinet in the near future, after winning the voters’ confidence and obtaining a number of votes that cannot be compared to the other forces.”

He said that the movement “began preparing for the post-Cabinet formation phase and the strategies for future policies.”

The Sadrist movement placed first in the October elections with 73 out of 329 parliamentary seats. It was followed by a coalition that secured 37 seats, and the State of Law Coalition led by Nouri al-Maliki placed third with 34 seats. The Kurdistan Democratic Party of Iraq's Kurdistan Region placed fourth with 32 seats.

“The next government will not be a majority government but rather a coalition involving everyone and in the formation of which all parties will take part. There won't be any talks on the government formation before the election results issue is resolved,” he said.

Despite numerous reports on negotiations to form a government, Iraq's Ummah Party leader Mithal al-Alusi told Al-Monitor that he does not see the "elections’ results as a driver to form a government and choose presidencies and parliament.” He said, “The forces that lost in the elections are trying to find a foothold in the government,” adding that most likely the new Cabinet will consist of “a consensus government to share the spoils like every time but at different rates.”

State of Law Coalition leading figure Saad al-Mutalibi denied to Al-Monitor “any moves to reach alliances because the situation is vague and every party will continue to stick to its position until the problems over the election results are resolved.”

Mutalibi expected to see “the most dangerous repercussions on the democracy path because the elections resulted in a political division that added to the sectarian and national divisions.” He added, “The divisions among Shiites portend the greatest danger, especially when we see that the competing parties did not present practical solutions to ease the status quo. On the contrary, we hear opinions that widen the gap between them.”

Speaking to Al-Monitor, Ahmed al-Sharifi, a political analyst and former member of the United Iraqi Alliance, said, “There is difficulty in forming a majority government, but the support it has from the religious authority as well as the popular support and international will will enable it to maneuver to impose itself. As for the forces who refuse a majority government, they have only two options: either joining the government and approving its program or joining the opposition as the Wisdom Movement.”

Sharifi said, “Getting rid of quotas and consensus when it comes to appointments in posts and decision-making is only possible with a majority government that can be held accountable in cases of failure.” He anticipated that “traditional forces will not join the Sadrist movement and may go for other options, and there is a great opportunity for the Sadrist movement to form a majority through an alliance with independent parliament members and those representing the protesters, together with Sunni and Kurdish forces.”

Director of the Iraqi Center for Strategic Studies Ghazi Faisal Hussein is optimistic about the Sadrist movement's victory in the elections. He told Al-Monitor, “The movement is able to form a national coalition government with Arab and Kurdish parties as well as the candidates who presented themselves independently from the political parties and entities and won 40 seats in these elections.”

Ali al-Fatlawi, a leading official in the Fatah Alliance, which rejects the election results, told Al-Monitor, “The talk about understandings among the Shiite forces within the Coordination Framework with the Sadrist movement is incorrect. Rather, there is competition between the two sides, and they are managing the conflict with caution.”

Fatlawi said he expected that “positive understandings would take place soon between the Shiite forces with the Framework and the Sadrist movement so as to form a Shiite bloc that includes nearly 170 parliament members. And in case it does not happen, chaos could be possible.”