Leftist Knesset members were angered by President Isaac Herzog visiting the Cave of the Patriarchs in the West Bank city of Hebron for Hannukah. 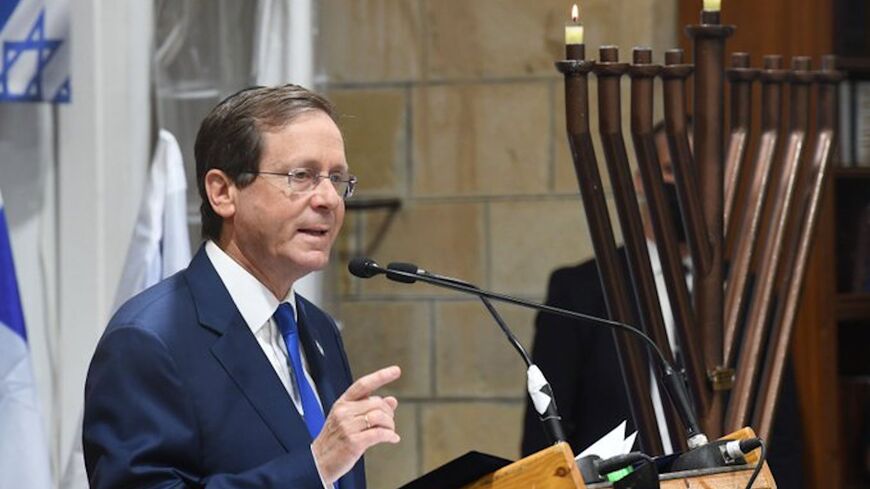 President Isaac Herzog lit the first Hanukkah candle in a Nov. 28 ceremony in the Cave of the Patriarchs, and controversy continues to roil Israel two days after the event. The shrine sits over the burial place of the biblical patriarchs Abraham, Isaac and Jacob in the contested city of Hebron. Sacred to both Muslims and Jews, it is considered one of the most explosive sites in the region.

Herzog’s move was inevitably condemned by the international community, with the Palestinian Authority behind some of the sharpest attacks against the president. But it was also denounced by Knesset members from the Israeli left who supported Herzog’s candidacy for president less than half a year ago.

Many of his critics brought up the massacre of Muslim worshippers at the site by extremist settler Baruch Goldstein in 1994. The incident, which left 29 people dead and another 125 injured, is still considered the worst instance of Jewish terrorism in all of Israel’s history. Herzog, the son of a former chief rabbi, was well aware of the sensitivity of the site but still ignored calls to avoid the ceremony.

He arrived in Hebron with heavy security shortly before the ceremony was scheduled to begin. Leftist demonstrators including Knesset member Mossi Raz of Meretz protested outside the compound. Waiting for Herzog inside the Herodian-era monument were leaders of the settlement movement in the West Bank and top IDF commanders responsible for the area.

Herzog stressed that it is important to stand united under the light of the Hanukkah candles and call on everyone to respect the institutions and guiding principles of the Israeli state and to “pay closer attention to one another, respect our differences and build one bridge after another in order to preserve what makes us unique — without, of course, harming any individual or community, its ideas or its beliefs.”

Although he recognized the controversy surrounding his visit, he did not address it directly. He commented, “We will not agree about everything, but we will always remember that ‘we are the sons of one man,'” quoting Genesis 42:11. "We all share roots extending back to this cave. … We must continue to dream of peace between the followers of all religions and the adherents of all religions in this land, and we must condemn every manifestation of hatred and violence. It is my wish that we all illuminate our homes with a great light and expel the darkness.”

Following the visit, criticism from the left only intensified. The most heated exchanged came the next day during a routine meeting of the Knesset Finance Committee.

The mood was already tense. Knesset member Yinon Azulai of Shas congratulated Herzog for choosing the Cave of the Patriarchs to light the first Hanukkah candle, noting that it is a historic symbol of the Jewish people. He expressed hope that Herzog would continue to make such choices in the future. Of note, Azulai was not the only Knesset member from the right to thank Herzog for the gesture even though they didn’t support his candidacy for president.

Knesset member Ofer Cassif, the sole Jewish member of the Joint List, called Herzog’s decision “disgraceful” and said it made him sick to his stomach. He went on to call Hebron “an occupied city under a disgusting apartheid regime, which commits war crimes on a daily basis.”

Cassif responded with a personal attack on the president. He said that he regrets voting for him in the election, but that now, “he is not my president. The fact that the president went there and granted [the occupation] legitimacy is disgraceful, especially considering that he lit the first candle before a despicable group that continues to justify a mass murderer like Baruch Goldstein.”

The committee meeting exploded in outrage. Knesset members from the right demanded Cassif apologize for his remarks about IDF troops. He refused and a shouting match ensued. Cassif was eventually ejected from the meeting, but only after he repeated his charge that Israeli soldiers were “war criminals.”

In a tweet, the head of the Joint List, Knesset member Ayman Odeh accused the president of intentionally taking an action that could escalate the already tense situation in Hebron: “Herzog did not go there to light the first candle. He went to set Hebron on fire. Anyone who celebrates with the supporters of that murderer Goldstein cannot be president of all citizens of Israel.”

Herzog’s move was also condemned by official sources in the Palestinian Authority — an unusual outcome as they tend to see him as a more conciliatory figure in Israeli politics. On Sunday, a statement by the Palestinian Ministry of Foreign Affairs called his visit to Hebron “a dangerous precedent attempting to Judaize the site,” arguing that such visits “provide support to the organized terror of settlers.”

Palestinian Minister of Civil Affairs Hussein al-Sheikh, who is close to President Mahmoud Abbas, added, “The visit by the Israeli president to the city of Hebron is an initiative of the settlement movement, resulting from the settlers’ campaigns.”

In contrast to these heated condemnations, the Israeli right — and the settler movement in particular — had warm words for Herzog: “We thank him for this and see great importance in connecting with Israel to the glorious heritage in the land of the Bible and especially in Hebron, the city of the patriarchs.”

The question now being asked is why Herzog, who was supported in his run for president last June by Arab Knesset members and all the parties on the left, chose Hebron to light the first candle on this eight-day holiday. He certainly realized that it would cause a commotion and that he would be perceived as playing to the right.

The answer is simple: Ever since he took office, Herzog has worked hard to be the president of all citizens of Israel, including Jews, the right, settlers and Arabs. Now, he wants to prove his commitment to this mission. Last month, he visited Kafr Qasim and participated in a memorial to the 49 innocent Arab civilians killed there by Israeli troops 65 years ago. The incident remains a festering wound in the relationship between Jews and Arabs in Israel. Herzog apologized in Arabic on behalf of the State of Israel, earning him praise from the left and condemnation from the right.

Herzog's agenda seems clear: He does want to be the president of everyone, no easy feat in a country as polarized as Israel.