As public schools struggle to accommodate an increasing number of students, thousands of students in the Aleppo area are being pushed into private schools. 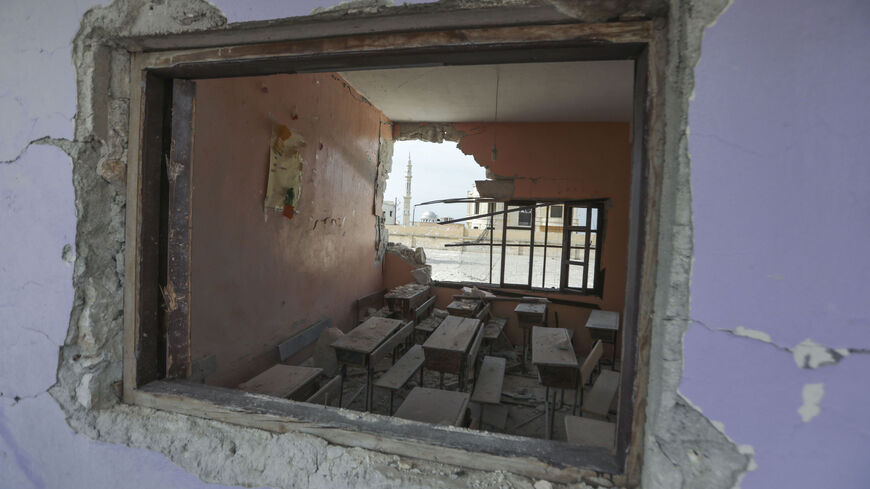 A picture taken on May 3, 2020, shows a rubble-covered classroom in a damaged school building in al-Nayrab, a Syrian village ravaged by pro-government forces bombardment near the M4 strategic highway, in the northwestern Idlib province. - BAKR ALKASEM/AFP via Getty Images

ALEPPO — Private schools in the opposition-controlled areas in the countryside of Aleppo in northwestern Syria are gaining popularity due to shortages in the public education system. In the repeated waves of displacement and overcrowding in cities such as Al-Bab, Azaz and Afrin, schools are struggling to accommodate the increasing numbers of students.

The shortage of public schools is also attributable to the transformation of a number of schools into military and security headquarters for the Turkish-backed Free Syrian Army. The local councils in the cities of al-Bab, Azaz, Afrin and other towns have converted a number of school buildings into office spaces. A significant number of schools have also been destroyed in battles between the Syrian regime and the opposition.

Private schools have surged dramatically in the countryside of Aleppo, especially in the city of Azaz. They have many advantages over public schools such as modern buildings and offer transportation in private buses.

Most private schools have highly qualified teachers. A private school teacher's monthly salary can reach $100, about $20 higher than that of a public school teacher. Qualified teachers find it difficult to survive on teaching salaries. Much of the current staff of public schools have not completed university degrees or have training specific to teaching.

Classrooms in public schools are massively overcrowded. In the city of Azaz alone, there are only 12 public primary, preparatory and secondary schools for some 22,000 students. The number of students in one classroom exceeds 40 in some schools.

A lot of capital is being invested into the growing and profitable private school system, including by a number of faction leaders in the Free Army and people close to them. Meanwhile, corruption plagues the public system and its underpaid staff.

Bassam Ahmed pays $700 in annual tuition for his three children. He says he no longer needs to help his children review their lessons at home, as he did when they were studying in a public school. Ahmed said the school has a distinguished staff of teachers who communicate ideas in clear and enjoyable ways to their students.

Ahmed told Al-Monitor, “The teachers and the school administration closely monitor students' progress, with regular meetings with the parents and ongoing communication via social media such as private WhatsApp groups. This keeps the parents well informed about their children’s activities, academics and class participation.”

Tuition for private schools in Azaz ranges between $200 and $300 a year, a large amount for many parents who work in blue-collar professions. Some of them, especially large families, are forced to cut back on their expenses to afford it.

For the poor families in Azaz with a large number of children, public schools seem to be the only option. Some families have 10 or more children close in age.

Ahmed Korg, an official at the private Dhad School in Azaz, told Al-Monitor, “Public education is not bad. The teachers working in public schools are very experienced and competent. The Education Directorate in Azaz is making great efforts to expand and upgrade public schools to accommodate larger numbers of students. The increase in the number of schools is a good sign. This means education is being provided to the largest possible number of children.”

He added, "The surge in the number of private schools in the countryside of Aleppo and in Azaz, in particular, is a positive sign. It has created competition between schools.”

An official in the Directorate of Education in the city of Azaz told Al-Monitor on condition of anonymity that the directorate is working with the Azaz city council to establish additional public schools in the city and its countryside to accommodate the increasing number of students.

“The directorate is now working to establish two new primary and middle schools within the city. It finished building a primary school at the beginning of the current academic year,” he said.

He added, "I think that the main reason for the spread of private schools in the city, which now number more than 14, is the sudden increase in the number of students. Tens of thousands of displaced people arrived in Azaz during the past two years from the Idlib countryside. … Areas of Idlib have been under continuous shelling by the regime and Russia, which causes waves of displacement toward Azaz.”