The displaced from eastern Ghouta protested a decision by Afrin’s local council to ban schools set up by them, by refusing to send their children to mixed schools. 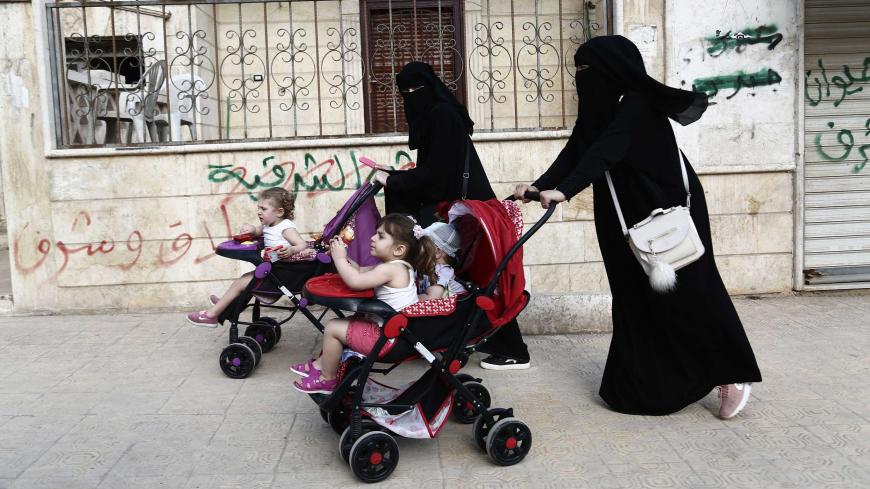 ALEPPO, Syria — Afrin in the northwestern Aleppo countryside is now home to tens of thousands of internally displaced persons. Refugees from eastern Ghouta are the most numerous among the thousands who came from other areas in Syria and brought their customs and traditions with them to Afrin. They have their own dishes, outfits for women and men, social relations of an Islamic nature, and other customs and traditions that are quite different from those of the Kurds, Afrin’s locals.

According to statistics by the Humanitarian Response Coordinators in northern Syria, 67,728 displaced people from eastern Ghouta have reached areas controlled by the Free Syrian Army (FSA) in the north of Syria.

The different lifestyles have created a barrier between Ghouta’s displaced persons and the Kurdish population in Afrin.

The Kurdish locals are less committed to Islamic teachings in terms of dress and social relations. For instance, Afrin’s young women wear jeans and go out without headscarves. Meanwhile, those from Ghouta wear a black abaya and a veil covering their faces, only showing their eyes. They do not mix with men at work or in school.

On Nov. 10, the local council's Education Directorate took the decision to shut down schools run by eastern Ghouta residents and turn all public schools into mixed schools. In response, the families from Ghouta did not send their children to school.

A source from the Education Directorate told Al-Monitor on condition of anonymity that this decision is in line with the educational system that was in place in Afrin before the FSA took over. The schools in Afrin were mixed gender during the control of the Kurdish People's Protection Units. The source added that other reasons for the decision include reducing costs, the number of teachers, and thus salaries, and operating expenses.

On Nov. 15, dozens of parents and teachers from eastern Ghouta organized a demonstration in front of a school in Afrin, protesting the directorate’s decision. They held up banners that read, “Our children have the right to learn in a pure educational environment.”

Other banners included the third paragraph of Article 26 of the Universal Declaration of Human Rights, which states, “Parents have a prior right to choose the kind of education that shall be given to their children.”

Omar al-Shami, an Arabic-language teacher from eastern Ghouta who works in a school in Afrin, told Al-Monitor, “When the 2018-19 academic year began in Afrin on Oct. 1, schools for children from eastern Ghouta consisted of two separate sections — one for boys and one for girls. Families pay no more than 5,000 Syrian pounds [around $10] per student per month. Local Kurdish children and children from various Syrian areas whose families have no problem with boys and girls attending the same school enrolled in mixed public schools."

Ghouta’s displaced opened three schools for their children in Afrin, but without a permit from the local council’s Education Directorate. Since Afrin is part of the Euphrates Shield area, it is supported by the Turkish government that pays the salaries of school employees and covers other expenses. The decision to only keep mixed public schools was approved by Turkish officials present in Afrin.

Shami said, “Afrin’s Education Directorate issued a decision Nov. 10 to close the schools attended by the children from Ghouta under the pretext that those in charge of these schools have no official permits. All schools in Afrin are to be attended by both boys and girls from grades one through nine.”

He added, “This is why Ghouta’s families prevented their children from attending these mixed schools. Five days after the decision was issued, parents and activists took to the streets in protest.”

Omran al-Doumani, an activist from eastern Ghouta who now resides in Afrin, told Al-Monitor, “A delegation of eastern Ghouta activists and dignitaries in Afrin met with officials of the city’s local council and with the representative of the Turkish governor of Hatay in Afrin on Nov. 16. The demands the protesters raised are going to be taken into account and parents agreed to allow their children to resume school in mixed classes. No final solution was reached, however, and the representative of the Turkish governor has promised to meet with Ghouta families to find a proper solution.”

He said, “The protesters demanded only that they be given the freedom to run their own schools without the intervention of the Education Directorate in Afrin. They did not demand the prohibition of mixed schools in Afrin. The displaced people respect the customs and traditions of the Kurdish residents of Afrin.”

Doumani noted, “We are often asked why we stay in Afrin if the locals' customs do not suit us. The truth is that people from eastern Ghouta have nowhere better to go and believe Afrin is their best option in the FSA-controlled areas. This is particularly true in terms of renting houses since it only costs around 20,000 Syrian pounds [$40, a month] to rent a place in Afrin while it costs over 100,000 Syrian pounds [$195] to rent in Azaz and al-Bab, a sum that displaced people cannot cover.”

While the Kurdish residents of Afrin are not hiding their resentment toward the new situation in the city after it has become a haven for thousands of Syrians coming from various areas, the FSA is trying to protect the customs and traditions of the locals and avoid possible clashes.

“The displaced people of eastern Ghouta who live in Afrin need to respect the customs and traditions of the locals,” activist Shero Alo from Afrin told Al-Monitor. “They need to be open to the people of Afrin and tolerant of their habits. They peacefully protested so they can have an educational system to fit their customs and traditions but they cannot impose it on all of Afrin’s residents. This doesn’t mean they cannot have their own schools where their Islamic customs are taken into account.”

He concluded, “The people of Afrin are certainly not against the freedom of the people living alongside them in the same area."