Is it true that Afrin's natives can't go home again?

The battle appears to be over in Afrin, Syria, but a war of words, and worse, continues there as the Kurdish People’s Protection Units accuse the Turkish army and its affiliated militias of forcing demographic change. 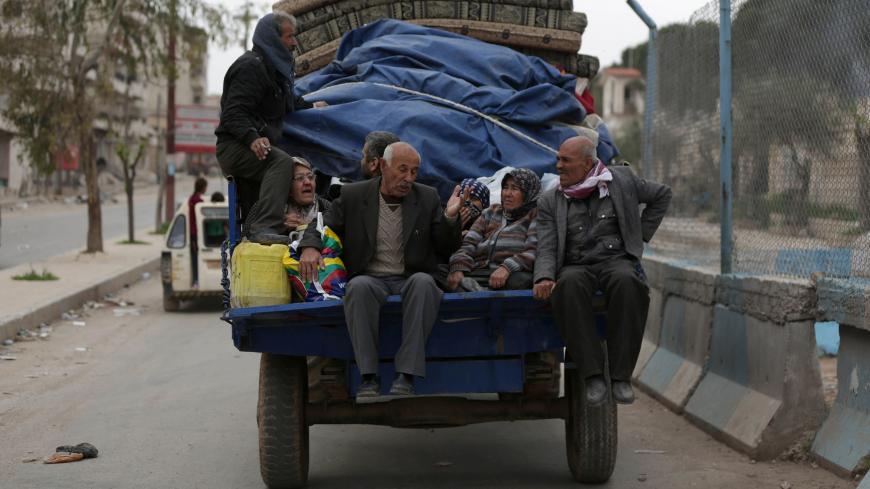 People ride in a truck with their belongings in the center of Afrin, Syria, March 24, 2018. - REUTERS/Khalil Ashawi

ALEPPO, Syria — Many of Afrin’s displaced families are returning to their homes. But it's said they must take rough roads to avoid attacks by members of the Kurdish People’s Protection Units (YPG) that, according to the Free Syrian Army (FSA), are shooting at everyone they see trying to return.

The YPG, however, accuses the FSA and Turkey of trying to achieve demographic change in the northern Aleppo city by forcing out the Kurds and other original residents.

Afrin has always been a Kurdish-dominated area, as the YPG controlled it before the FSA and Turkey took over March 18 — after which Arabs and Turkmens started pouring in, though they never outnumbered the Kurds there. However, it seems a demographic change indeed occurred when waves of displaced families from eastern Ghouta settled there.

Lt. Col. Zuhair Estanbouli is commander of the FSA-affiliated Mohammad al-Fateh Brigade, made up of Kurdish, Arab and Turkmen members. He told Al-Monitor, “A large group of our members are handling the return of Afrin’s displaced families. Some members are deployed in the area located between us and the areas controlled by the YPG near the villages of Tunb and Kumar. There, we receive families that usually come on foot and we transport them in vehicles we have allocated to bring them back to their homes in Afrin.”

The YPG also accuses the FSA of threatening to kill Afrin residents if they return to their homes, preventing them from entering their villages and demolishing and burning down their homes. According to YPG claims, the FSA and the Turkish army aim to naturalize Arab families, specifically those who came from eastern Ghouta near the capital Damascus with the recent waves of displacement. The alleged naturalization process included the city of Afrin and its affiliated areas throughout the region. In addition, the YPG argues that these families have opened shops and restaurants in Afrin and are benefitting from an area that isn't theirs.

The YPG said it already has begun to fight the process. A May 4 statement on the group’s official website said it had assassinated Jamal al-Zaghloul, the former police chief in eastern Ghouta. When Zaghloul came to Afrin, the YPG said, he was put in charge of transitioning eastern Ghouta families into the city and of intimidating Afrin's remaining original residents to force them out. The statement said those handling the naturalization process in Afrin are the YPG's next targets.

Life in Afrin seems quite normal. The streets are full of passersby; some of them are Arab, and many veiled women can be seen on the streets. They are mostly families of FSA members stationed in Afrin, in addition to the displaced families from eastern Ghouta. Meanwhile, Kurdish families from Afrin can be identified by the modern clothes they wear, like jeans, and women are mostly unveiled. A good number of worshipers from eastern Ghouta can be spotted reading the Quran in Salah al-Din mosque, where original Kurdish residents can also be seen praying.

Ibrahim Abdel Jawad from the town of Saqba in eastern Ghouta told Al-Monitor that he and his family arrived in Idlib on April 6 with convoys of displaced persons from Ghouta. “The camps in Idlib are overcrowded; we didn't have a place to live. My family and I decided to come to Afrin one week after our arrival in Idlib. We were told the area has good housing and rents are low compared to the rates in Idlib. My family and I live in a house we rented for 20,000 Syrian pounds [$39] a month in the city of Afrin. We have water, and the security situation is good. I am currently looking for work in the city to support my family,” he said.

“Afrin’s Kurdish residents aren't very fond of our presence among them," he added. "They see us as outsiders who come to share their property, but that's not true. We are displaced people. We'd be very happy to leave Afrin to its people if only we could return to our homes in eastern Ghouta. Theirs are unjustified concerns.”

FSA spokesman Lt. Col. Mohammad Hammadin told Al-Monitor the YPG’s claims are false and he denied FSA factions deployed in Afrin have any deliberate policy of naturalizing Arab families there. He said that what happened was normal: Families from various parts of the country came to Afrin and other areas of northern Syria under the control of the Syrian opposition.

The local council in Afrin doesn't have specific data on the number of families that remain displaced. However, the council noted that about half of the residents of Afrin, nearly 100,000 people, are still far from returning to their homes and live in YPG-controlled areas in northern Aleppo. Afrin is now a city for Syrians from all different sects — Arabs, Turkmens and Kurds — from various Syrian regions such as eastern Ghouta, Deir ez-Zor, rural Homs and other areas.