A local council in Afrin, Syria, is being formed to help restore the city's services and improve people's quality of life. 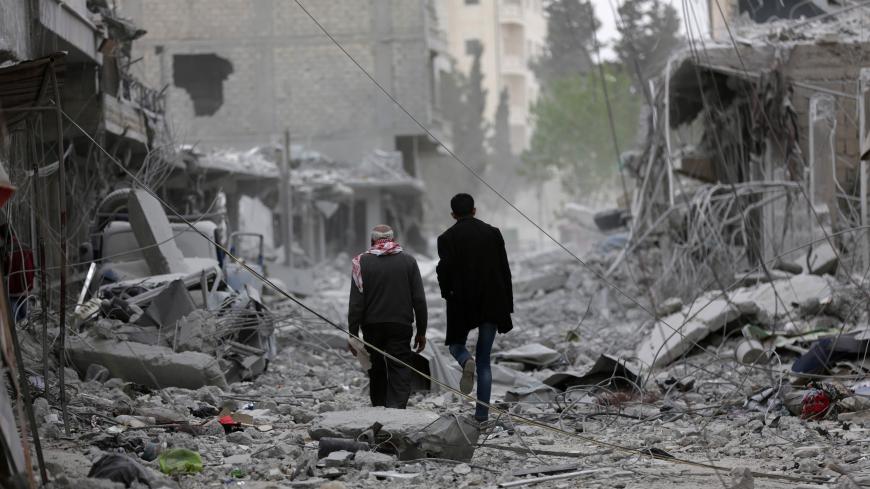 Men walk through debris in the center of Afrin, Syria, March 24, 2018. - REUTERS/Khalil Ashawi

ALEPPO, Syria — The city of Afrin, which is part of the larger Afrin district in northern Aleppo province, is getting an interim governing council to help rebuild services now that Turkey has wrested control of the area from Kurdish groups that Ankara considers terrorists.

The National Coalition for Syrian Revolutionary and Opposition Forces — also known as the Syrian National Coalition — announced that the local council will be headed by Zuhair Haidar, with Abdo Nabhan as its deputy head. An executive board also was elected.

"The local council is the first step toward electing several local councils for all the areas affiliated with the Free Aleppo Governorate Council in order to restore stability and ensure the return of the displaced to their lands," the coalition announced April 12.

Turkey and its allied Free Syrian Army (FSA), a Turkish-backed coalition of rebels that opposes the regime of President Bashar al-Assad in the Syrian civil war, were able to seize Afrin city March 18 as part of Turkey's Operation Olive Branch. The Turkish Armed Forces launched that operation Jan. 20 to fight the Kurdish People’s Protection Units — the armed wing of the US-supported, Kurdish nationalist Democratic Union Party.

Nabhan told Al-Monitor, “The council is temporary and might stay for six months only to offer services to the city and restore stability. After this temporary period, we can launch wide-scale elections in the city to choose the members of the [permanent] local council.”

He said, “Afrin has a mostly Kurdish population that was given the majority of seats in the council. The council head is also Kurdish, and the council is made up of 20 seats. The Syrian Kurds got 11 seats, the Arabs eight seats and the Turkmens one seat. The members of the executive council were also elected from the temporary council. The condition for the candidates in the local council is to be from Afrin originally and to be living there.”

Many tasks await the local council in Afrin, as the city’s municipal service sector has been paralyzed since Operation Olive Branch took control. Many bakeries that provide the critical bread supply for citizens closed up shop and schools stopped welcoming students.

Mohammad Sheikh Rashid, a member of Afrin’s local council, told Al-Monitor, “We expect to face substantial challenges in offering the city services because our capacities are limited. The council is prioritizing securing the basic living needs for Afrin’s citizens, such as reopening the bakeries, supplying water, cleaning public roads and making fuel available to operate water pumps, the bakeries and public transport cars in the city.

"In the education sector in Afrin, an official from Afrin’s executive council office was appointed. He met with the minister of education and higher education in the interim Syrian government — Imad Bareq — and officials in the Free Aleppo Governorate Council to put in place an education structure in Afrin and open all schools," Rashid said. "The council is getting ready to administer the exams of the elementary and secondary classes in early June.”

Rashid said the Syrian National Coalition met April 20 with the opposition-affiliated interim government in Gaziantep, Turkey. Members of the Free Aleppo Governorate Council and Afrin city council attended. "The meetings tackled the needs of Afrin and ways [to] help offer support and fulfill the basic needs of civilians as well as activate the service institutions in the area,” he added.

The attendees said other major priorities for Afrin’s local council are returning the displaced to their cities and homes and restoring Afrin’s stability and reconstructing its infrastructure.

Afrin resident Mohammad Khalil told Al-Monitor, “The city has seen remarkable progress in its service sector. Some bakeries have resumed work, but we need more potable water and the municipality should clean the streets. We call on the local council to govern the city and ensure its security. Many people from Afrin want to return home, but they are afraid of the deteriorated security situation in the city and the bad services.”

Afrin was the victim of some FSA members’ looting and robbery after Operation Olive Branch took over. The FSA command and Turkish army took several measures to fight the robberies, arrested several thieves and deployed military police checkpoints. With these measures, Afrin appears to be coming back to life, but it still needs more support. Turkey is expected to back the local council.

The council said there currently are no statistics on how many people remain displaced, but it promises to research the matter.