Syrian opposition seeks to clamp down on looting in Afrin

The Syrian armed opposition has taken steps to curb looting in Afrin by some of its members and has promised residents that it will recover and return their stolen property. 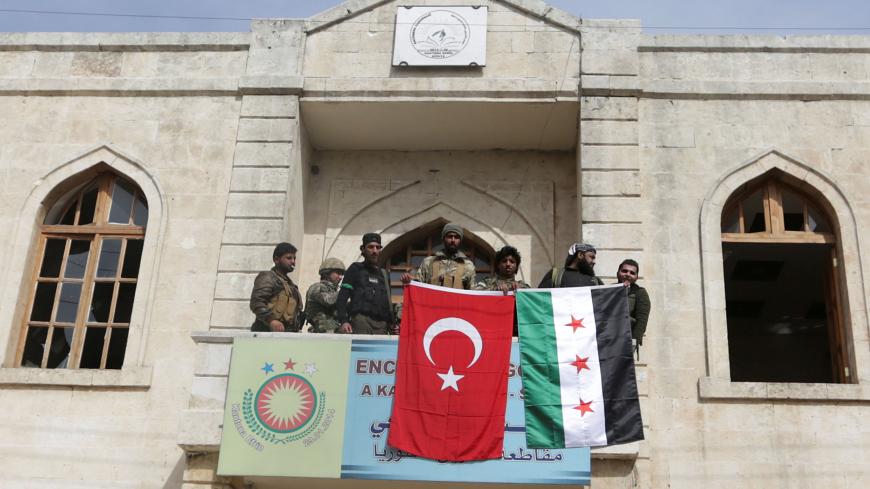 ALEPPO — “Opposition forces have succeeded in imposing greater security in Afrin,” said Lt. Col. Mohammad Hamadin, official spokesman for the Syrian National Army (SNA), the Turkey-allied militias of the Free Syrian Army. Hamadin, who took part in Turkey's Operation Olive Branch in Afrin, told Al-Monitor that theft and looting by opposition forces had been quelled in the city. The Turkish army and its allies in the armed Syrian opposition captured Afrin from Kurdish forces on March 18.

Following the end of the fighting, Afrin experienced a wave of assaults and “taafish,” the colloquial term for looting committed by military members. The looters and thieves, who belonged to the armed opposition, took cars, motorcycles, tractors, furniture, household appliances and other private property and robbed shops.

The Ministry of Defense of the opposition Syrian Interim Government had formed the Military Police on Feb. 20 under the command of Mohammed Sheikhli. The force's main headquarters is in the city of al-Bab. The opposition forces are relying on the police to control security in the city. A number of opposition members accused of theft have been arrested.

After the Turkish and opposition forces seized control of Afrin, Hamadin said, the SNA erected dozens of checkpoints at the city’s entrances and exits and arrested scores of looters and perpetrators of other abuses against locals, including theft and vandalism, for investigation by the military. Large quantities of looted items have been secured and stored in warehouses for return to their owners.

“We have dealt firmly with all the abuses against the people of Afrin that have occurred since the liberation of the city,” Hamadin asserted. “The perpetrators have been pursued and arrested, and the security campaign will not cease until the looted property has been returned to its owners and the thieves held to account. We can say that we have succeeded to a large extent in ending a state of chaos and have begun to restore security in the city, with locals returning smoothly to their homes.”

Various factions within the SNA as well as civil and social opposition groups had demanded that the looting in Afrin be brought to a halt and the perpetrators held accountable. On March 19, the 3rd SNA Corps announced its decision to disband a number of its battalions because of their involvement in robberies. On the same day, the Ministry of Defense of the Syrian Interim Government issued directives to the SNA, urging it to maintain public security and safety and protect citizens' property.

Opposition activists wrote slogans on the walls of the city decrying and condemning these actions, reminding members of the armed opposition that the revolution was meant to defend Syrians, not steal from them. Activists also spoke to Afrin residents and listened to their problems and grievances. On March 22, the military police opened a complaints office in Afrin and urged all opposition factions to cooperate.

Saleh Sheikho, an Afrin resident whose car was stolen from outside his house by an armed group, told Al-Monitor, “I came out of my house a day after Afrin fell into the hands of the SNA on March 19, and I didn’t find my car there. It had been stolen. I didn’t hear the sound of the engine, so maybe the thieves loaded it onto a crane and took it somewhere far away. Even if I had heard it and seen the thieves with my own eyes, I could not have done anything about it or stopped them. I filed a complaint with the office opened by the SNA in Afrin, and I hope to get my car back. There are many people like me in Afrin who lost property in the days following the entry of forces from the SNA. Some locals lost everything they owned at the hands of thieves.”

Lt. Col. Zuhair Estambuli, commander of the SNA's Sultan Muhammad al-Fatah Brigade, explained to Al-Monitor, “We opened the complaints office in Afrin for people who have lost private property. We also tightened security on roads leading into and out of the city to assist the SNA Military Police. Forces from the SNA have been prevented from leaving and entering the city unless they are on an official mission. Extensive inspections are carried out on all military vehicles upon entry and exit.”

Col. Moataz Raslan, commander of the Nokhba Army, a militia in the SNA, asserted to Al-Monitor, “More than 90% of the groups who were carrying out abuses and theft in Afrin have been arrested and referred to SNA military courts. Most of the abuses have ended, and we will now begin a campaign to return civilians to their homes and restore whatever property the SNA is able to recover. We promise the people of Afrin to return all the property stolen during this period, and we apologize on behalf of the opposition. The groups that carried out these thefts do not represent the SNA or its principles.”

Raslan explained that efforts are underway to try to recover looted property and make the situation secure for residents. “After the situation stabilizes in the city, we will think of a way to compensate the people who did not regain their property. Compensation could be allocated, but not now, of course. We are preoccupied with bringing the city back to life and forming civil entities to provide services to the people and facilitate their return.”

Hisham Darbala, commander of the Azaz Military Police station, told Al-Monitor, “The Military Police played a major role in enforcing security in Afrin. It issued circulars of suspects, whose photos were distributed, who appeared in videos showing them stealing residents’ properties in Afrin.”

Darbala further stated, “Checkpoints were also erected in areas surrounding Afrin. Large quantities of the looted goods were seized and dozens of perpetrators arrested. The Military Police in cooperation with the various commanders from the SNA deployed security checkpoints and barriers in the vicinity and requested that locals inform us of the stolen properties and their description.”

For the SNA, the looting in Afrin by some of the armed groups affiliated with it represents blight on its name. The opposition forces have a lot to prove to gain local residents' trust and respect.