The manufacture of the first-ever locally made electric car in Egypt has hit a bump due to failed negotiations between the Egyptian Ministry of Trade and Industry and Dongfeng Motor Corporation regarding the agreement to manufacture the E70 electric car. 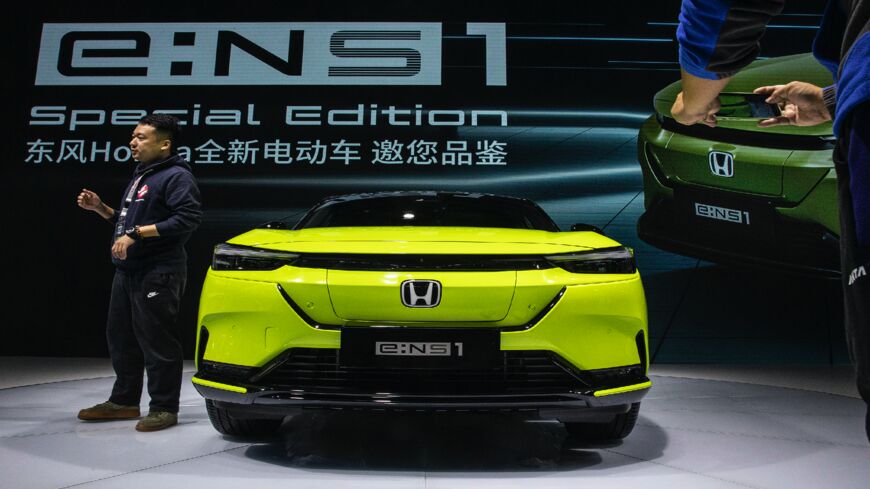 Attendees look around the Dongfeng Honda ENS1 on Oct. 21, 2021, in Wuhan, China. More than 150 brands took part in the Wuhan Motor Show 2021 Show. According to local reports, more than 20 domestic electric vehicle brands participated in the exhibition. - Getty Images

CAIRO — The Egyptian dream of producing the first local electric car did not go smoothly. It actually hit a bump, as Egypt announced the suspension of negotiations with its Chinese partner, Dongfeng Motor Corporation, to produce the first Egyptian electric car.

The Egyptian Ministry of Public Works announced in a statement on Nov. 11, 2021, that "negotiations with Dongfeng to produce the E70 electric car, in cooperation with Al Nasr Automotive Manufacturing Company, affiliated with the Ministry, have stopped.”

The ministry said the reason behind the halted negotiations was “the inability to reach an agreement with Dongfeng to sufficiently reduce prices of the imported parts that are needed to manufacture the car and enable Al Nasr Automotive Manufacturing Company to manufacture cars and offer a competitive and attractive price for consumers.”

The ministry confirmed that "new channels of communication have been opened with one of the specialized global consulting offices to identify an alternative partner, and positive results are expected to be reached before the end of November.”

The Egyptian journey to produce the first electric car began in Yulbio in 2019 when a delegation from Dongfeng visited Cairo and met with Minister of Trade and Industry Amr Nassar, who announced that “the company is seriously considering the manufacture of electric cars in Egypt with the aim of using them for transportation purposes in the public sector and taxis.”

In December 2019, Egyptian Minister of Public Business Sector Hisham Tawfik confirmed after meeting with the delegation of Dongfeng that “it was agreed to produce a Chinese car under Al Nasr Automotive Company, which [halted operations in] 2009. The production capacity of the company within years will reach about 25,000 electric cars.”

The Egyptian Ministry of Public Business Sector took executive steps. Tawfik announced in June 2021 “the start of a trial production with the first Egyptian electric car starting in July or August 2022,” noting that “this production will be experimental with 100 cars until production begins with an actual capacity of 25,000 electric cars per year.”

In August 2021, Al Nasr announced the import of 13 electric cars of the model produced by Dongfeng to be tested in Egypt before Al Nasr would begin its manufacture. Al Nasr and Uber made an agreement, and cars were delivered to drivers nominated by Uber after being trained by a team from Dongfeng on the use and charging of electric cars. The car was tested according to specific criteria at a driving distance of up to 30,000 kilometers per car over a period of three to four months.

On Nov. 1, Tawfik revealed that changes in the agreement to manufacture electric cars with Dongfeng contributed to disrupting implementation.

He said, “Among the obstructive factors was the change in management of the Chinese company and the ongoing negotiations regarding the pricing of the components that make up the electric car.”

Tawfik added in press statements that “the ministry received a report from Uber drivers about the experience of the car to be manufactured in the Egyptian market, and it was sent to the Chinese company. But the latter has not responded yet.”

He said the report “contained some technical and commercial notes. However, negotiations with the Chinese partner took longer than expected and planned. The real problem is the lack of flexibility.”

After the Egyptian Ministry of Public Business Sector announced the failure of negotiations, the pro-Egyptian media attacked Tawfik.

Ahmed Moussa, a media figure close to the regime, said, “Three years ago, the government engaged in negotiations to manufacture an electric car. After determining the price of the car, charging spots, specifications, classes and car safety, the Ministry of Public Business Sector suddenly stopped negotiations with the Chinese company.”

On Nov. 17, on the TV show “Ala Mas’ouliyati,” Moussa said, “Why did the ministry tackle the manufacture of an electric car to begin with without studying the idea. It would have been better to announce this after the completion of the procedures and negotiations.”

On Nov. 15, Tawfik confirmed that “the project to produce a local electric car was underway, as the ministry received proposals for the names of five electric cars in preparation for selecting one of them to be manufactured by Al Nasr Automotive Manufacturing Company.”

Tawfik explained in a statement that “an agreement was signed with the Egyptian Bright Skies Company, which specializes in developing operating and control systems for electric cars, to produce the first Egyptian battery for cars, which gives great hope for the localization and development of the automotive industry in Egypt.”

For his part, the expert and former executive director of the Association of Automobile Manufacturers, Maj. Gen. Hussein Mustafa, confirmed that "the state insists on implementing a project to manufacture a local electric car, regardless of obstacles.”

In his statements to Al-Monitor, Mustafa said, “The Ministry of Public Business Sector hastened to announce the details of the project, despite the fact that negotiations with the Chinese Dongfeng Corporation have not been completed and have been stalling for a long time.”

He added, “Cairo realizes that the future is for electric cars in light of the climate change crisis. Therefore, it insists on producing them locally. But the project may face future crises, and its implementation may be delayed due to the global price crisis, which affected the automotive sector.”

"The state needs to spread the culture of buying electric cars and increase charging centers for these cars as well as maintenance service centers, which are important for the success of the Egyptian project to produce local electric cars," Mustafa said.

China in the Mideast
Technology