Bennett in bind over prayer space by Western Wall

Prime Minister Naftali Bennett knows that in the current political constellation, he has little choice but to advance the outline for a Jewish prayer space by the Western Wall. 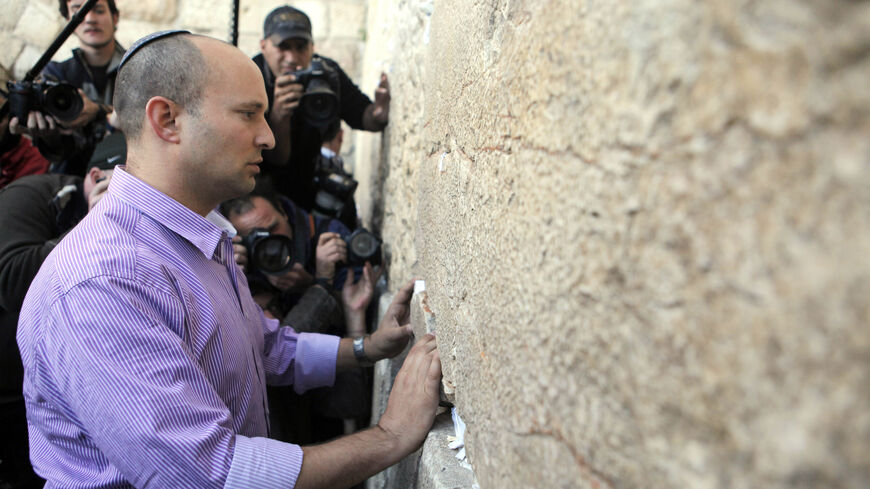 Naftali Bennett, head of the HaBayit HaYehudi party, the Jewish Home party, during a visit to the Western Wall, Judaism's holiest site, on Jan. 21, 2013, in Jerusalem, Israel. - Lior Mizrahi/Getty Images

Prime Minister Naftali Bennett has a majority, at least on paper, to pass the Western Wall compromise. This compromise outline has been discussed for years inside Israel and in contacts with American Jewry leadership. It would allow liberal denominations of Judaism to pray at the site in keeping with their beliefs, including the full and equal participation of women.

In fact, Finance Minister Avigdor Liberman, who has been advocating for this, announced last week that he intends to push forward with the compromise proposal, which former Prime Minister Benjamin Netanyahu put on hold in 2017. Other supporters of the compromise include Foreign Minister Yair Lapid, Transportation Minister Merav Michaeli and, of course, the leaders of left-wing Meretz. All of these ministers represent a predominantly secular, liberal electorate.

Nevertheless, passing the compromise would evidently put the government — and especially [national-religious] Bennett — on a collision course with the more traditional and ultra-Orthodox sectors. There is already a huge rift between Bennett and these communities because of his decision to join the government in the first place and promote reforms in the way religious services are provided in the country. Pushing forward with the Western Wall compromise would be the last straw, resulting in an acrimonious divorce.

While Bennett would prefer to see this whole issue buried, left-wing parties in his coalition are aligned with Liberman’s to move forward with this as part of their secular agenda. As a result, this veritable “hot potato” is fast making its way to the Prime Minister’s Office. Tensions regarding this issue were evident on Nov. 5 when violent clashes broke out at the site between Reform Jews and the ultra-Orthodox. It was only due to the emergency intervention of President Isaac Herzog that politicians from both sides of the divide avoided showing up at the Western Wall as well, since that would only have led to full-blown riots.

In response to plans to revive the Western Wall compromise, the ultra-Orthodox parties, backed by Netanyahu, the Likud and the Religious Zionist party, have launched an aggressive public and political campaign targeting Bennett and the government. For them, the Western Wall compromise is a gold mine when it comes to destabilizing the government from the outside. So far, they have struggled to convince people to take to the streets to demonstrate against the government. The battle over the Western Wall is different. It is so emotionally charged that it spread like wildfire among the religious sectors. All it would take is a summons by this community’s rabbinic leadership to get hundreds of thousands of people to demonstrate.

Realizing how devastating it can be for him should his government move ahead with the compromise, Bennett took to social media this week to accuse the opposition of fanning the flames of hatred and division. “The Western Wall … is being used today for a deliberate political campaign for which money has been raised in order to goad the government.” Then he explained, “Why? Because someone thought it would stick. And maybe it will stick. But the damage will be massive.”

He then wrote, “If there is a problem, we can solve it through dialogue. … You don’t do polls and decide to go with all force on a divisive campaign over the Western Wall. You simply don’t. Before getting swept up in a storm of emotions over something, ask yourselves: ‘What are the facts? Is someone actually using you here?”

Associates of Bennett accuse Shas Party chairman Aryeh Deri of fueling the flames. They say that Deri’s people have been fundraising for a campaign against the Western Wall compromise. So far, this campaign includes ads on social networks condemning the Bennett-Lapid government, but there are reportedly also plans to hold mass demonstrations and prayer services to protest the government’s policy.

Shas responded to Bennett with derision, saying, “There are no problems at the Western Wall, nor is there any need for ‘dialogue.’ The Western Wall is not the Carmel market. It is not open for negotiations.” Then they turned directly to Bennett: “As hard as it is for you, try to stand for what you wrote. Don’t touch the holy Western Wall. Don’t change anything there. … Suddenly, you will discover that there is no deliberate campaign, there are no polls, there is no fundraising and there are no serious instances of paranoia.”

Shas people were referring to Bennett’s past support for the previous government’s measures to stop the compromise from being implemented. At the same time, they did not actually deny that there was a campaign underway. According to Knesset and Shas Party member Yinon Azulai, “We will not allow them to destroy our Jewish state. We will not allow them to trample on the sanctity of the Western Wall.”

The complications surrounding the issue within the coalition is evident from remarks made by ministers Ze’ev Elkin of the New Hope party and Ayelet Shaked of Yamina, who is close to Bennett. Both of them oppose the compromise. Shaked, who is currently in the United States, reportedly told a meeting of Jewish organizations in New York that she opposes any efforts to violate status quo. Elkin, who is religious, was quoted as saying that he would also oppose the compromise, explaining, “Religious denominations should not have any representation or status when it comes to managing the Western Wall. The Western Wall should be run by the State of Israel and the Jewish Agency, not the Reforms, Conservatives or Orthodox.”

Statements such as these express the intensity of the conflict now weighing on Bennett. Evidently, he will do whatever it takes to keep his government intact. At the same time, however, he is aware that, according to the rotation agreement, he will have to pass the Prime Minister’s Office to Yair Lapid two years from now while maintaining a level of public support that he doesn’t have now.

Journalist and researcher Shmuel Rosner, a specialist in American Jewry, contends that while the current coalition, without the ultra-Orthodox parties, has a solid majority in the Knesset and is sure to pass the compromise, it may not be able to enforce it given its steep price. It would require an enormous police force to maintain order and prevent clashes.

“The problem with this compromise is its practical implementation in a place where there are lots of ultra-Orthodox worshippers daily and very few, if any, Reform and Conservative worshippers or American Jews. … What this means is that if the government passes and attempts to implement the compromise, it will have to be proactive when it comes to policing the site and maintaining order. My suggestion is that before the government passes the compromise, it must think serious about what it does on ‘the day after.’ Passing it and then failing to implement it is worse than not passing it in the first place.”

It is important to note that the Western Wall compromise was originally promoted by Netanyahu himself in 2016 with the silent consent of the ultra-Orthodox. The compromise determined that the site would be expanded and would include three areas: a section for men and a section for women — both of which currently exist and are considered the main part of the Western Wall complex — and an additional new area for egalitarian, mixed prayer services.

As abovementioned, this compromise was eventually shelved after the ultra-Orthodox succumbed to pressure from the communities. When they threatened to quit the coalition over it, Netanyahu preferred to keep his alliance with them rather than implement the compromise.

As in so many other issues, Netanyahu is likely to become a major player in it. Now that he is head of the opposition, he is more eager than ever to preserve his alliance with the ultra-Orthodox. As such, he is likely to lead opposition to the compromise alongside them, especially since his religiously traditional supporters also feel a sense of alienation from the Reform and Conservative movements. Maybe this is what Bennett fears most of all.