The Algerian presidency said the killing of the three Algerian truck drivers in a roadside bombing on Monday "will not go unpunished." 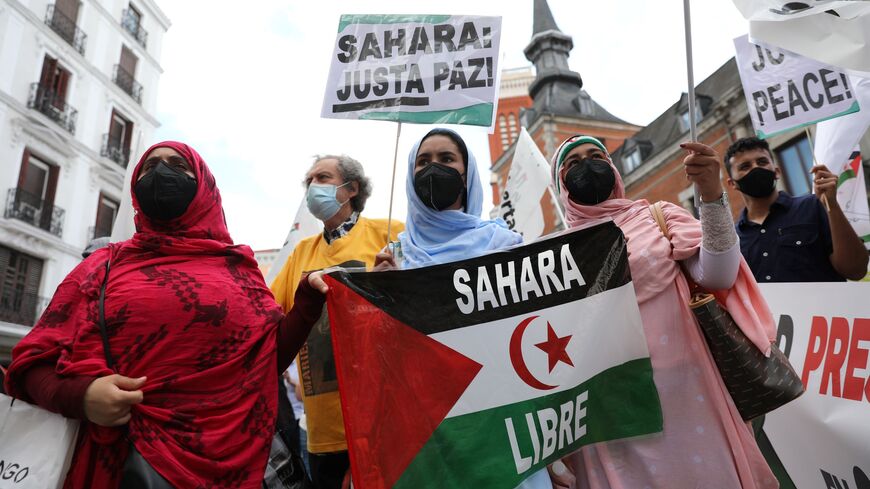 Saharawi women display Saharawi flags during the demonstration on June 18, 2021, in Madrid, Spain. Occupied by Spain until 1975, the disputed territory of Western Sahara is under Morocco's control, and the Algeria-backed Polisario Front has been fighting to secure its independence since then. - Isabel Infantes/Getty Images

Algeria blamed Morocco on Wednesday for a roadside bombing that killed three Algerian truck drivers, an accusation leveled amid mounting tensions between the North African neighbors over disputed Western Sahara.

On Monday, “Three Algerian nationals were cowardly murdered after their trucks were barbarically bombarded,” read a statement from the Algerian presidency carried by the Algerian Press Service state news agency.

The truckers were reportedly driving on a road linking the Mauritanian capital, Nouakchott, to the Algerian city of Ouargla. Algerian website Mena Defense, which published a video showing the burned trucks, reported that the incident took place between the towns of Ain Bentili and Bir Lahlou.

“Several factors pointed to Morocco’s occupation forces in Western Sahara as having committed this cowardly murder with sophisticated weaponry,” the Algerian statement said. “Their murder will not go unpunished.”

Morocco has not yet responded to the allegations. Agence France-Presse quoted an unnamed Moroccan source as saying the kingdom “has never targeted and will never target Algerian citizens.”

Algeria severed diplomatic relations with Morocco in August, citing Rabat’s alleged use of the Israeli-developed Pegasus spyware against Algerian officials, supporting a separatist group and other “hostile actions.”

The Moroccan Foreign Ministry dismissed the accusations and pledged to remain a "credible and loyal partner for the Algerian people.”

Ties between the North African neighbors were already strained over Western Sahara, where the Algeria-backed Polisario Front has for decades fought Morocco for control of the territory.

In a US-led resolution on Friday, the United Nations Security Council voted to extend the UN peacekeeping mission in Western Sahara for another year. The resolution called on both parties to abide by a three-decadelong cease-fire that broke down in November 2020.