Robert Malley said the US and its allies feel a "shared impatience" with Iran's delay in returning to the bargaining table. 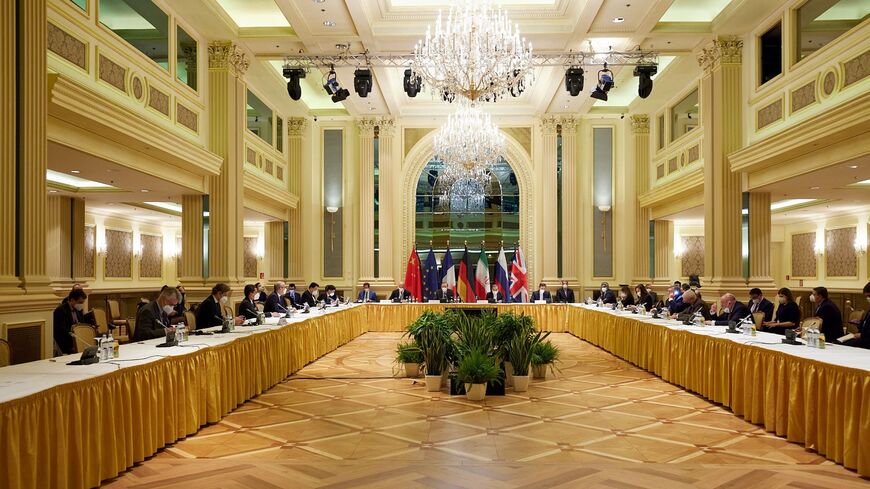 In this handout provided by the EU delegation, representatives of the European Union, Iran and others attend the Iran nuclear talks at the Grand Hotel on April 15, 2021, in Vienna, Austria. - EU Delegation in Vienna via Getty Images

US Special Envoy for Iran Robert Malley said Monday there’s a “shared impatience” among Gulf and European allies over Iran’s refusal to set a date for nuclear talks in Vienna.

Malley spoke with reporters following recent trips to Saudi Arabia, the United Arab Emirates, Qatar and France, where he said interlocutors are growing concerned “over the “pace and direction of Iran’s nuclear progress.”

“At this point it’s hard to find an innocent explanation as to why it’s taking so long,” he said, adding that the reasons given “are wearing very thin."

Multilateral negotiations aimed at reviving the Joint Comprehensive Plan of Action began in April, but have been on hold since the election of hardline Iranian President Ebrahim Raisi in June. In recent weeks, Iranian officials have expressed a willingness to return to Vienna for a seventh round of talks, but have declined to give a date.

Malley said US partners and allies are growing "increasingly concerned" that Iran will continue its delay or return to Vienna with new demands.

“We’re in a critical place,” Malley said, adding that “more intense diplomacy” will follow in the coming days and weeks.

“The window for diplomacy is never going to be closed,” Malley says. “We will continue to pursue diplomacy even as we pursue other steps, if we face a world in which we need to do that.”

The Biden administration maintains that diplomacy is the best way to bring Iran back into compliance with the accord but in recent weeks has signaled there are “other options” should Iran not change course.

“If diplomacy fails, we have other tools. And we will use other tools to prevent Iran from acquiring a nuclear weapon,” Malley said.