In a joint press conference with his counterparts from Israel and the United Arab Emirates, Blinken said the United States is prepared to pursue “other options” if Tehran doesn’t resume compliance under the nuclear deal. 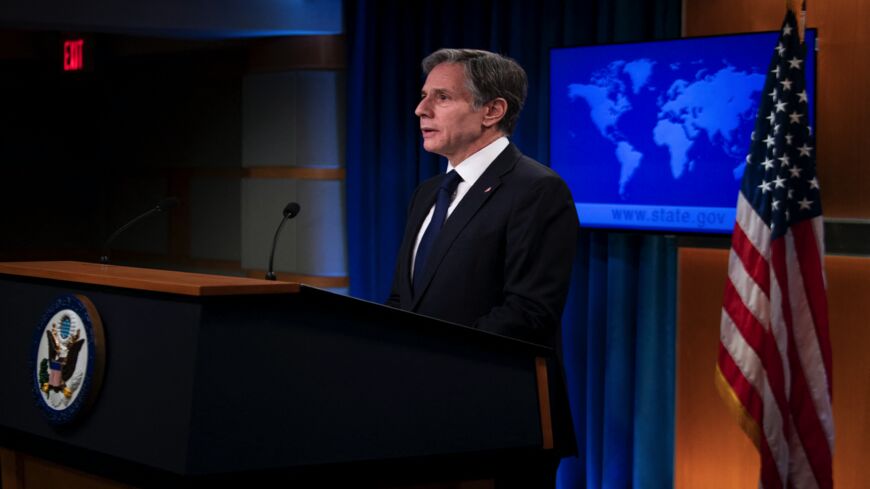 US Secretary of State Antony Blinken speaks about refugee programs for Afghans who aided the United States during a briefing at the State Department on Aug. 2, 2021, in Washington, DC. Blinken on Monday renewed his vow of a "collective response" to Iran, which had warned adversaries against reprisals after Tehran was blamed for an attack on an Israeli-linked tanker. - BRENDAN SMIALOWSKI/POOL/AFP via Getty Images

Secretary of State Antony Blinken warned “time is running short” for Iran to re-enter the landmark agreement that curbed its nuclear activities, adding the United States is prepared to pursue “other options” if Tehran doesn’t resume compliance.

“We're united in the proposition that Iran cannot be allowed to acquire a nuclear weapon," Blinken said in a joint press conference alongside his counterparts from the United Arab Emirates and Israel.

“With every passing day, and Iran's refusal to engage in good faith, the runway gets short,” he added.

After former President Donald Trump abandoned the Joint Comprehensive Plan of Action (JCPOA) in 2018, Iran began steadily violating the accord, which set curbs on the purity and amount of Iran’s enriched uranium stockpile in exchange for sanctions relief.

“We are getting close to a point at which returning to compliance with the JCPOA will not in and of itself recapture the benefits of the JCPOA, and that’s because Iran has been using this time to advance its nuclear program in a variety of ways,” Blinken said.

The United States is ready to return to indirect talks aimed at reviving the deal, which has been on hold since the election of hard-line President Ebrahim Raisi in June. Iranian officials have expressed a willingness to return to Vienna for a seventh round of negotiations but haven’t given a firm date.

Blinken said diplomacy remains the best way to bring Iran back into compliance but added, "We are prepared to turn to other options if Iran doesn’t change course.”

“We will look at every option to deal with the challenge posed by Iran,” he told reporters. “We continue to believe that diplomacy is the most effective way to do that. But it takes two to engage in diplomacy, and we have not seen from Iran a willingness to do that at this point.”

He also said the administration will move ahead with plans to reopen the US consulate in Jerusalem, which had functioned as a de facto embassy for the Palestinians before Trump shuttered it in 2018.

Speaking at the press conference on Wednesday, Lapid said Iran is becoming a “nuclear threshold country.”

“Israel reserves the right to act at any given moment in any way,” he said. “That is not only our right, it is also our responsibility. Iran has publicly stated it wants to wipe us out. We have no intention of letting that happen.”