A team of investigators appointed by the Human Rights Council said the rival factions, foreign fighters and third countries involved in Libya's war have likely committed war crimes and crimes against humanity since 2016. 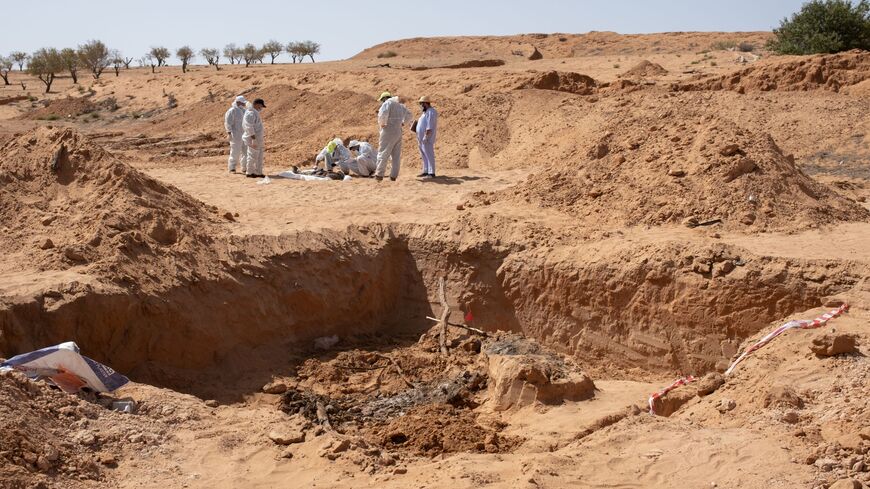 Members of the General Authority for Search and Identification of Missing Persons team investigate victims of Al-Kaneyat massacres in a newly discovered mass grave in Meji, Libya, on Sept. 27. - Nada Harib/Getty Images

Libya’s warring parties and their foreign backers have likely committed war crimes and crimes against humanity since 2016, a United Nations investigation found.

A team of investigators appointed by the Human Rights Council said Monday that attacks on hospitals, schools and migrant detention centers were common in the North African country’s civil war. As part of its investigation into extrajudicial killings, torture, sexual violence and other abuses, the Independent Fact-Finding Mission on Libya reviewed hundreds of documents and interviewed more than 150 people in Libya, Tunisia and Italy.

“The violence that has plagued Libya since 2011, and which has continued almost unabated since 2016, has enabled the commission of serious violations, abuses and crimes, including crimes against humanity and war crimes, against the most vulnerable,” the report said.

“Airstrikes have killed dozens of families. The destruction of health-related facilities has impacted access to healthcare, and anti-personnel mines left by mercenaries in residential areas have killed and maimed civilians,” said the probe’s chair, Mohamed Auajjar.

The UN investigators compiled a list of Libyan and foreign perpetrators, but are keeping the names confidential. The findings come as a new unity government in Libya prepares to hold nationwide elections in late December.

Libya has been embroiled in conflict since the toppling of longtime dictator Moammar Gadhafi in 2011. The oil-rich country was then governed by two rival administrations — the eastern-based Libyan National Army (LNA) and the Tripoli-based Government of National Accord (GNA).

The UN said civilians were especially at risk from the fighting during the LNA’s year-long offensive on Tripoli, which ended in June 2020 when the GNA regained full control of the strategic city.

Since the onset of Libya’s civil war in 2014, foreign governments have flooded the country with illegal arms and mercenaries. The United Arab Emirates, Egypt, Jordan and Russia backed Khalifa Hifter’s self-styled army, while the GNA received support from Turkey and Qatar.

The fact-finding mission said Monday it also documented widespread violence against jailed migrants who were seeking refuge in Europe, as well as LGBTQ individuals and other minorities.

“Violence in Libyan prisons is committed on such a scale and with such a level of organization that it may also amount to crimes against humanity,” the investigators said.

The report also documented the recruitment and direct participation of children in the conflict, as well as enforced disappearance and extrajudicial killings of women. The report also verified atrocities committed in Tarhuna, a city formerly controlled by the Kaniyat militia. Forensic experts have since discovered numerous mass graves containing civilian bodies.