The victorious headlines ran in all the pro-government print news media, which are in desperate need of good news amid the deepening economic crisis. 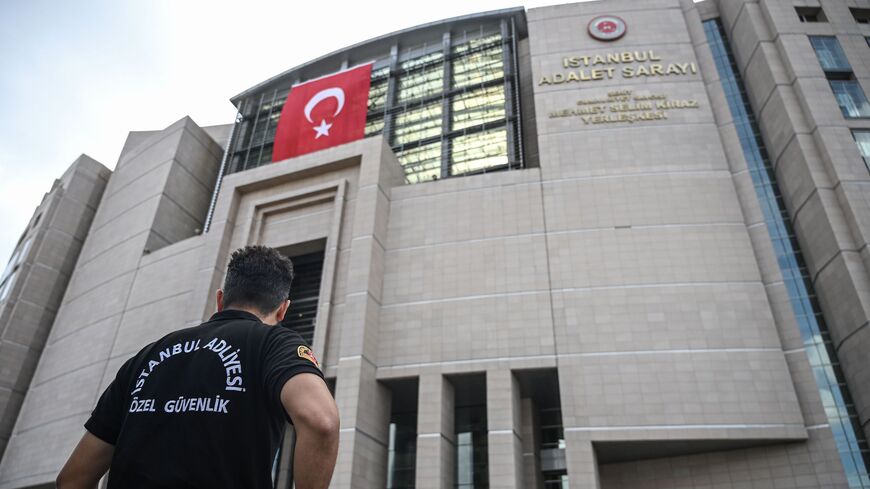 A security officer stands guard in front of an Istanbul courthouse on July 17, 2019. - OZAN KOSE/AFP via Getty Images

All pro-government news stations in Turkey simultaneously aired the same story Oct. 13: of a Sept. 24 Turkish intelligence operation against an Iranian espionage network in southeastern province of Van. Images from the operation filled the screens, with commentary praising the operation that netted two alleged Iranian spies and six Turkish citizens. Although the arrests took place almost three weeks earlier, the government decided to hold off before making the news public.

When asked the reasons for the delay, a former senior official in the Turkish Intelligence Agency (MIT) told Al-Monitor, “Turkey has always been a popular destination for Middle Eastern dissidents. Tailing the dissidents is the foreign intelligence services. The Turkish government has several criteria, almost an algorithm, to decide what to do with foreign dissidents. In this case, [Iranian pilot] Mehrdad Abdarbashi was given refuge in Turkey. Now, after the officer lived in Turkey for three years, why did Iranians spend time and money to kidnap him? MIT has surveillance over several Iranian spies in Turkey, sometimes a 'catch-and-release' policy is applied, if their country provides the proper code. This time, my guess is that catch-and-release did not work because Iranians failed to give what the Turkish side demanded. So MIT gets headlines and bragging rights. It is good PR for our guys. It is also a revenge move against Tehran.”

The victorious headlines ran in all the pro-government print news media, which are in desperate need of good news amid the deepening economic crisis. The frequent success stories about Turkish intelligence activities could be partially attributed to MIT head Hakan Fidan, who prefers staying out of the limelight in the rather turbulent waters of Ankara bureaucracy, but the stories also signal increasing tensions between Turkey and Iran.

Savash Porgham, a journalist with expertise on Iranian affairs, told Al-Monitor, “For a while now, the fate of political refugees between Iran and Turkey are determined by the health of relations as well as a cost-benefit analysis. This covert operation, being revealed 20 days later, can be interpreted as a sign of rising tensions.”

As AKP elites face internal problems, they have become more willing to talk to journalists. One senior bureaucrat in the security establishment told Al-Monitor, “Iran has been crossing our red lines despite all our warnings. We sometimes need to make a public stand against their habitual attempts at espionage. There are other Iranian soldiers who sought refuge in Turkey and we have been protecting them. It would be unwise for Tehran to think they could come here and act as if it is their backyard.”

Ankara’s patience with Tehran has been wearing thin. Iranian-government-funded and ordered kidnappings have become a major sore point between Ankara and Tehran.

The arrests of two Iranian drivers in Azerbaijan as well as the closure of a mosque and the office of the Iranian supreme leader’s representative in Baku, Seyyed Ali Akbar Ojaghnejad, are another signal of Turkey’s growing influence in Azerbaijan. Ojaghnejad has been in Baku since 1996 and is considered a crucial political and symbolic figure.

Porgham explained, “There is a new paradigm on Iran’s northwestern border since the 44-day Karabakh war last year. With Turkish support Azerbaijan took Karabakh and effectively shut down the direct [oil and gas] route from Iran to Yerevan," costing Iran influence in the region. Iran’s loss is Turkey’s gain and “Turkey could use this to pressure Iran in the near future, given that the region has Iranian-Turks who are Shiite but also feel ethnic proximity to Azeris,” added Porgham.

Since the past year, Ankara has intensified its efforts to realize the oft repeated “one nation, two governments” dream with Azerbaijan and it seems determined to minimize Yerevan and Tehran’s presence in the region. Increasing ultranationalist sentiment in Turkey gives Ankara even more justification to increase its unconditional support for Azerbaijan.

Vahid Yucesoy, a PhD candidate in political science at University of Montreal in Canada, told Al-Monitor, “Turkey’s increasing presence in the Caucasus and its unequivocal support for Azerbaijan in the Nagorno-Karabakh conflict with Armenia put Iran and Turkey on opposing sides. Fearful of the backlash from its large Azeri minority within its boundaries and not being able to afford a major conflict with Turkey, Iran had to bite the bullet and gave a very subdued reaction to the conflict, calling on both sides to patch up their differences rather than stating unequivocal support for Armenia. Moreover, the rivalry between Turkey and Iran also came to a head when Ankara stationed more troops in Northern Iraq in Sinjar, a move that infuriated pro-Iran Shiite militias and Tehran.”

“We don’t have the luxury to be the swing player in the region balancing Riyadh against Tehran. We need to be on the winning side, and we need to make sure Tehran understands we mean business.” said a pro-AKP analyst working for a prominent Ankara think tank.

However, not all is lost between Ankara and Tehran. On Oct. 9, senior Iranian officials attended the welcoming ceremony for the Islamabad-Tehran-Istanbul corridor, signaling both governments' willingness to keep doing business when interests align.