While Ankara requests the most renditions of any country, its own borders remain extremely porous, its security personnel vulnerable to corruption and its territory a playground for foreign intelligence services. 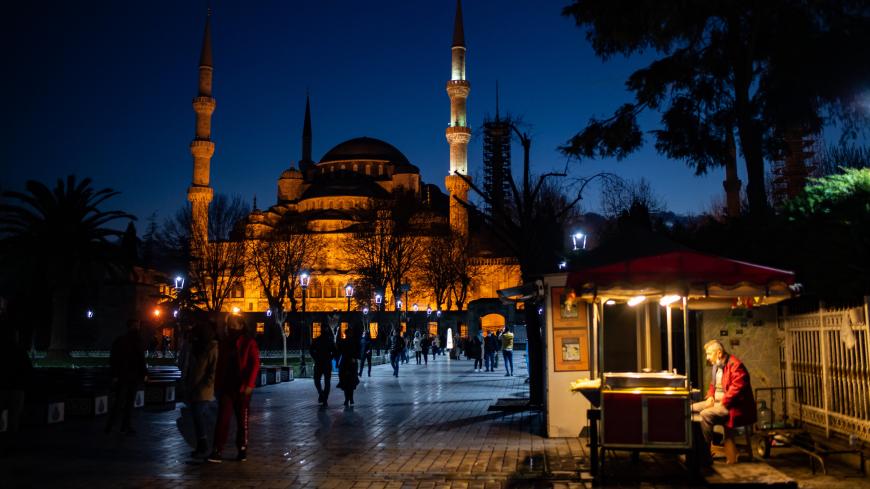 A street vendor sits in front of the Blue Mosque during the new year's celebrations in Istanbul on Dec. 31, 2020. - YASIN AKGUL/AFP via Getty Images

Mohammed Mosaed is an award-winning Iranian journalist. He famously tweeted during the November 2019 protests in Iran, “Knock knock! Hello Free World! I used 42 different proxy to write this! Millions of Iranians do not have internet. Can you hear us?" The tweet required not only significant technical skill but also nerves of steel.

Mosaed was arrested in November 2019 and kept for 16 days at the notorious Evin prison, which is run by Iran's Islamic Revolutionary Guard Corps.

When Mosaed criticized the Iranian government’s handling of the COVID-19 pandemic, he was arrested and interrogated again in February 2020. He was released but his social media accounts remained suspended. In August, he was charged with colluding with foreign powers against Iran’s national security and spreading propaganda against the state. He was sentenced to four years and nine months in prison and banned from practicing his profession and using mass communication devices for two years.

He managed to get himself smuggled into the eastern Turkish province of Van and the Turkish authorities allowed him to stay in the country after his plight garnered widespread local and international support.

A senior government official told Al-Monitor, “Unless people are involved in criminal or terrorist activity, we do not deport them to countries where their lives are in danger. In this case, it looks like he is fine in Turkey.”

In April 2020, Mosaed topped the One Free Press Coalition’s 10 most urgent cases list. As of February 2021, he still is at the top of that list — even in Turkey.

Behnam ben Taleblu, a senior fellow at the Foundation for Defense of Democracies in Washington, told Al-Monitor, “If reports of Turkey's decision not to deport Mosaed are officially confirmed, it would be a win for those seeking justice for Iranian journalists and dissidents. Yet the move does not spell the end of the saga, as Mosaed’s future and legal status in Turkey remain unclear.” Taleblu added, “While no two refugee stories are the same, there does seem to be a set playbook for Turkish officials when it comes to Iranian refugees. This entails either permitting residency or transit, turning a blind eye toward harassment, kidnapping and assassination, or active detention and deportation by authorities back to Iran.”

Aykan Erdemir, senior director of the foundation's Turkey program, told Al-Monitor, “Although Ankara and Tehran have repeatedly managed to find common ground to join forces against their respective Kurdish insurgents over the years, there appears to be some asymmetry when it comes to the treatment of asylum seekers. Iranian dissidents who reside in Turkey as they wait to secure refugee status in a third country feel the long arm of the Islamic Republic’s informants and assassins, who have carried out numerous targeted killings and kidnappings on Turkish soil.”

Turkey has traditionally been a safe haven for Iranian dissidents. One of the most famous Iranian seeking refuge in Turkey was Grand Ayatollah Ruhollah Khomeini, who spent nearly a year in the country starting in 1964. Over the last decade, Turkey has ironically become a popular host state to those who escape the wrath of the Islamic Republic as well as an attractive spot for Iranian investors.

Vahid Yucesoy, a PhD candidate in political science at the University of Montreal, told Al-Monitor, “Especially since 2016, when the relations between Tehran and Ankara experienced a sort of renaissance, we started seeing a lax attitude by Turkish authorities toward Iranian dissidents.” Yucesoy was referring to the recent mysterious murders of Iranians in Turkey.

Saeed Karimi, the CEO of Persian Language GEM TV, was shot dead in Istanbul April 2017 and Arsalan Rezaei, a staunch critic of Islam and the Iranian regime, was assassinated in December 2020. In 2019, Masoud Molavi Vardanjani was shot dead in the streets of Istanbul. The government arrested scores of individuals suspected of links to Vardanjani's murder.

On Feb. 11, pro-government news outlets reported that Iranian diplomat Mohammed Reza Naserzade was involved in the murder of Vardanjani. Iranian officials promptly denied the news. In October 2020, Habib Chaab, the leader of the Swedish branch of the Arab Struggle Movement for the Liberation of Ahvaz, was abducted from Istanbul by Iranian agents.

Although some cases of targeted Iranians are well documented, it is not possible to know the exact number of Iranian dissidents who were deported or went missing in Turkey.

Savash Porgham, an Iranian journalist and academic living in Istanbul, told Al-Monitor that a variety of factors seem to determine the fate of Iranian dissidents in Turkey. Ankara seems to engage in cost-benefit calculations to decide whether to deport or protect a political dissident.

Porgham said, “At the end of the day we also see a class issue. For example, a wealthy rapper may not be deported while an ordinary dissident may. Both countries consider other factors rather than the legal procedure.”

“The fact that Iran and Turkey have a reciprocal visa-free travel system that allows visitors to stay up to 90 days in the country also means intelligence agents and state employees can travel without diplomatic passports. For a variety of reasons Turkey is one of the countries where Iranian intelligence operations are carried out with ease,” Porgham observed.

Will anyone in Turkey's bureaucracy be investigated over missing or murdered Iranians? If not, does that mean the Iranian government receives political support in Turkey?

A 2021 report by Freedom House revealed that Ankara tops the charts in renditions. Since 2016, Turkey has reached into dozens of countries, demanding hundreds of individuals to be handed over without due process. Some of these activities could be accurately described as kidnappings of those Ankara considers enemies. In many cases, these operations are reported in the national news as successful captures by Turkey’s intelligence agency.

While Ankara boasts of its successful rendition operations abroad, its own borders remain extremely porous, its security personnel vulnerable to corruption and its territory a playground for foreign intelligence services.

Turkey’s Islamist movement had long complained that Western powers were doing as they pleased in the country. Now the shift is undeniable: With high profile murders by Saudis and Iranians, we can see who is roaming freely in Turkey.