Turkey’s withdrawal of a limited number of Syrian militia from Libya is aiming to sidestep potential accusations of spoiling the election process in the war-torn nation as December elections near. 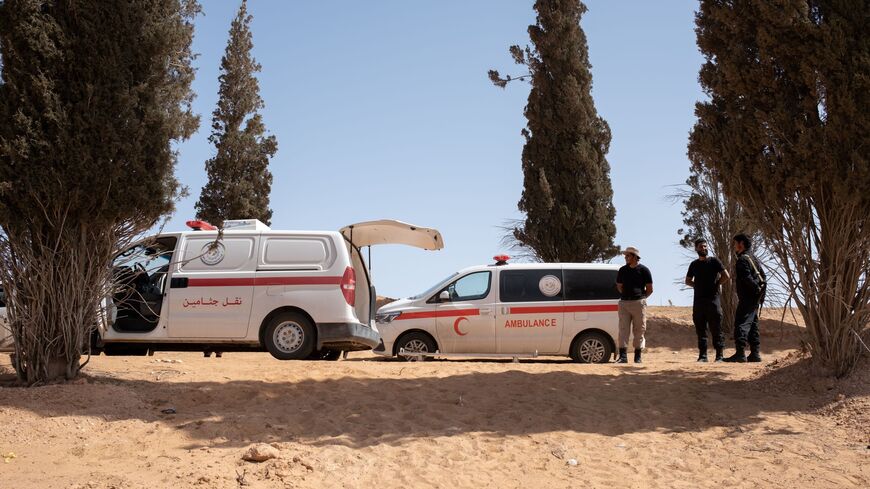 Security officers guard the mass grave site in a large agricultural area known as Mashrou al-Rabet, in Mejion Sept. 27, 2021 in Tarhuna, Libya. Tarhuna city was a previous stronghold for Al-Kani militia affiliated with warlord Khalifa Haftar. Since June, following the defeat of Haftar's forces in the western areas of Libya, the Libyan government has found 193 dead bodies. - Nada Harib/Getty Images

Turkey has withdrawn a limited number of Syrian mercenaries from Libya over the past weeks, but the problem of foreign troops and militia presence in the war-torn nation remains unresolved only two months before the country’s elections.

Libyan Foreign Minister Najla al-Mangoush confirmed the withdrawal in early October, describing the development as “a very modest start,” before “a larger and comprehensive organization for the exit of mercenaries.” Yet reports of fresh Turkey-led transfers from Syria to Libya appear to be overriding this start. The presence of foreign militias has turned into a stalemate between Russia and Turkey, which support rival Libyan factions in the decade-long civil war.

Russia insists that all foreign forces, including Turkish troops and Turkish-backed militias, should withdraw while Moscow is increasing its coordination with Egypt. Withdrawal of the Turkish-backed Syrian fighters came on the heels of the normalization talks between Turkey and Egypt in early September — a move which is seen as Ankara's good-faith gesture.

According to sources familiar with the withdrawal process, Turkey pulled Syrian mercenaries stationed in Misrata and Tripoli out of the country on three separate flights over the past two months. The sources told Al-Monitor the move came as part of ongoing normalization efforts between Turkey and Egypt.

According to Libyan sources, of some 5,000 militia troops in the country, around 800 have left as of Sept 30. The Syrian Observatory of Human Rights (SOHR) puts the number of Syrian fighters withdrawn from Libya as of Oct 13 at some 520.

Yet the war monitor also reports that some 200 new Syrian fighters were sent to Libya within the same time frame. According to the SOHR, Turkish authorities have reportedly asked Syrian opposition leaders to keep their members “on alert” for new transfers.

The UN-brokered Libyan ceasefire on Oct. 23, 2020, set a three-month period for the withdrawal of all foreign forces from the African nation, but the deadline was not met. Turkey and Russia “tentatively agreed” to kick off the withdrawal process during the Second Berlin Conference on June 23, 2021.

Meanwhile, on Oct. 8, rival Libyan parties agreed on a plan for the withdrawal of all foreign fighters and mercenaries from the country, a move which UN special envoy for Libya Jan Kubis welcomed as a “breakthrough achievement.” The plan from the UN-led Geneva talks envisages “gradual, balanced and simultaneous” departure of all foreign troops from the country.

According to Sky News Arabia, the plan's four steps are withdrawal of foreign forces from their fighting positions; deployment of UN observers; identification of the total number of foreign forces and mercenaries; and the deportation of all foreign forces, to be completed by 2023.

However, observers remain skeptical. According to Jalel Harchaoui, a Libya expert at the Clingendael Institute in The Hague, the latest developments fall short of a real change.

Mangoush's remarks create "illusion" of change, Harchaoui said, but the foreign minister is lining up with Prime Minister Abdul Hamid Dbeibeh, who has close ties with Turkey. Mangoush’s absence from a meeting this month in Benghazi with ministers who oppose Turkey’s Libya policies “concretely indicates that she is much more aligned with Dbeibeh now,” Harchaoui opined. "So, she has a greater propensity to say that things are evolving in the right direction."

Following the first batch of withdrawals, Mangoush met with her Turkish counterpart Mevlut Cavusoglu on Oct 15 in Ankara ahead of the Libya Stability Initiative conference held on Oct 21 in Tripoli, but details of the meeting remain unknown.

Although Ankara seems flexible on withdrawal of the Syrian mercenaries, it maintains that the presence of Turkish troops in Libya is part of a bilateral military cooperation agreement between Ankara and the Tripoli government. Russia, in turn, argues that all foreign forces, including the Turkish troops, should withdraw in a gradual and synchronized manner. Both sides benefit from the ambiguity and the current stalemate.

This Russian position has led to a standoff during UN Security Council sessions to extend the UN mission’s mandate in Libya held in early October. A British-led plan for the withdrawal of foreign mercenaries was vetoed by Russia, which in turn, proposed an alternative plan for simultaneous, balanced and gradual withdrawal of all foreign forces from the country. The parties eventually agreed to extend the mission's mandate until January 31, 2022, but failed to issue a joint declaration.

The Russian foreign minister reiterated Moscow's position after a meeting with his Egyptian counterpart Sameh Shoukry in Moscow. “Our position is clear: this should be done in stages and in a synchronized manner to avoid any risk of undermining the existing balance of power,” Sergey Lavrov said during the joint presser on Oct. 4.

Some other groups that are loyal to the Turkish-backed Libyan Government of National Unity also find the Turkish presence problematic “We used to control positions, while today we have been stripped of everything,” said Salah Badi, the commander of the al-Somoud Brigade, in Asharq Al-Awsat newspaper. “We control nothing and Turkey now controls everything, even foreign policy.”

Partial withdrawal of the Syrian mercenaries appears to be a tactical and misleading move aiming to stave off pressure on Turkey as the Dec. 24 election nears. But if the unfolding developments disrupt the election timetable, Ankara will likely be held responsible for the outcome and will be further dragged into this controversy.