The first official visit from Egypt to Libya's internationally recognized Tripoli government aims to prevent a possible military push against strategic Sirte under the control of the rival group. 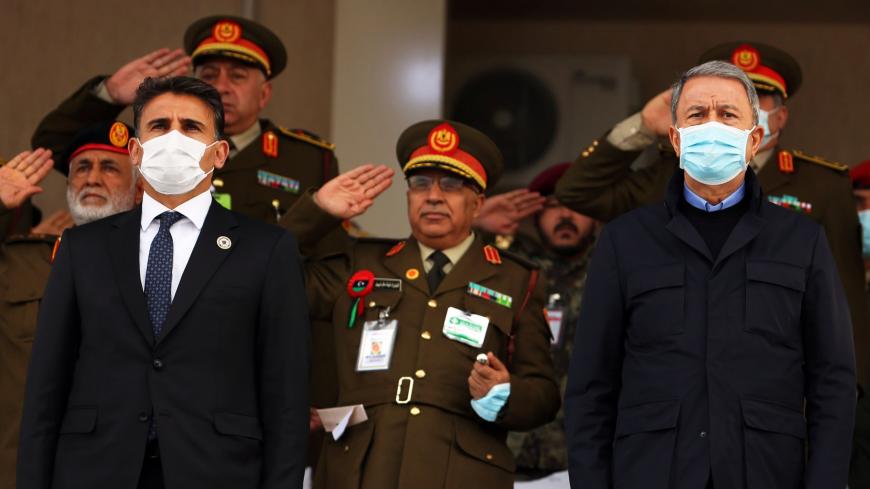 Turkish Defense Minister Hulusi Akar (R) and his Libyan counterpart Salah Eddine Namrouchin (L), both wearing masks due to the COVID-19 pandemic, attend a graduation ceremony for new batches of students from the Military College in the Libyan capital, Tripoli, on Dec. 26, 2020. Akar made the surprise trip to Libya two days after strongman Khalifa Haftar urged his fighters to drive out Turkish forces from the oil-rich country. Two days later, top Egyptian officials visited the country. - AFP via Getty Images

Turkey has been insisting on a Libya strategy that calls for the all-out defeat of one of the warring Libyan factions, but recent Egyptian diplomatic efforts have revealed the vulnerabilities of Ankara’s approach.

In a surprising outreach, Egypt dispatched a high-level delegation to Tripoli on Dec. 28 to Libya’s Government of National Accord; Cairo has been supporting Libya's eastern forces commander Khalifa Hifter. The newly initiated talks between the two sides, which include plans for the reopening of the Egyptian diplomatic mission in Tripoli and resumption of mutual flights, have the potential to spoil Ankara's gains in the Libyan conflict, where Turkish military support has tipped the balance in favor of the Government of National Accord against the Hifter-led forces, which are also backed by the United Arab Emirates.

The visit came amid a recent showdown between Ankara and Hifter. Speaking during independence day celebrations Dec. 24, Hifter called on his forces to “clear the country” of Turkish forces following the Turkish parliament’s approval to extend the deployment of Turkish troops in war-torn Libya.

“There will be no security or peace as long as the boots of the Turkish military are desecrating our immaculate soil," Hifter said.

Turkey’s response was quick. On Dec. 27, Turkish Defense Minister Hulusi Akar, accompanied by the top military brass, paid an unannounced visit to Libya. “They cannot find a place to escape in the event of such a move,” Akar said in response to Hifter’s threats. "Hifter and those who support him should know that any attempt to attack Turkish military personnel will render them a legitimate target,” he was quoted as saying by Turkey's state-run Anadolu News Agency.

As the war of words prompted fears of new clashes, Egypt, which also voiced similar threats against Turkey in the face of a possible Turkish-backed Government of National Accord military operation only a few months ago, brought an unexpected adroitness to the heated scene through a series of diplomatic maneuvers.

A delegation from the Egyptian Foreign Ministry paid a visit to Tripoli on Dec. 28, holding five high-profile meetings with the top political and military officials of the Government of National Accord, including Foreign Minister Mohamed Siala. The outreach came after the head of Egypt’s General Intelligence Service, Abbas Kamel, had visited Benghazi on Dec. 19, during which time he assured Hifter that Egyptian military and political support for Libya's stability would continue.

The Tripoli visit marks a new page in ties between Cairo and the Government of National Accord. The delegation’s schedule was also remarkable as it included a meeting with Interior Minister Fateh Bashagha, who, despite meeting with Egyptian officials this week, is known for his close ties with Ankara. Bashagha presented the delegation a painting by a Libyan artist.

This first official visit from Cairo to Tripoli hints at a new era in ties between Cairo and the Government of National Accord. According to the Tripoli government's Foreign Ministry, the officials discussed the implementation of the Oct. 23 cease-fire, the outcome of UN-mediated military and security talks between warring factions and confidence-building measures. Both sides also decided to immediately start preparations for the reopening for the Egyptian mission in Tripoli and a resumption of flights.

Following the visit, Egyptian Foreign Minister Sameh Shoukri held a phone conversation with Siala, stressing the visit has been an important milestone to advance cooperation between the two sides and extending his gratitude for the Government of National Accord’s warm welcome.

The visit was even welcomed by Egypt’s archenemy in Libya, the Justice and Construction Party, the political wing of the Libyan Muslim Brotherhood. The group said in a statement that both sides must work together for the stability of Libya despite their differences; the group has previously solely relied on Qatari and Turkish support.

The Government of National Accord, in turn, might have seen the visit as an official recognition by Egypt, which has long been supporting Tripoli's rival in the conflict. Similarly, Turkish officials might be thinking that Egypt is moving closer to Ankara’s stance by finally acknowledging the Tripoli government’s internationally recognized status, which Turkey has long been promoting. Yet Egypt prefers to stay out of legitimacy discussions between the rival Libyan factions. Besides, the diplomatic outreach signifies that Egypt has extended its influence to the country’s western regions that have been under Turkey’s hinterland so far.

By possibly helping create a new balance of power on the ground, the move stands out as a success on Egypt’s part. By establishing ties with the Tripoli government without severing its ties with forces in Benghazi and Tobruk, Cairo is making an intimidating entrance into an arena where Turkey has been trying to entrench its political, military and financial influence and forcing the Government of National Accord factions to take Cairo into consideration in their future decisions.

In fact, it’s not the first time Egypt has leapfrogged Turkey in the Libyan field. The game-changing move came in August when Cairo hosted the UN-brokered cease-fire talks between the rival Libyan groups. The latest visit indicates a new stage in this policy.

According to the Egyptian media, the high-level visit has also aimed at preventing a possible military operation by the Government of National Accord against the strategically significant Sirte and al-Jufra regions controlled by the Hifter forces. Egyptian officials reportedly believe that Turkey and the Government of National Accord were in preparation for a sudden military push in Libya.

Jalel Harchaoui, a researcher specializing on Libya at the Clingendael Institute in The Hague, believes that Egypt is aiming at both normalizing ties with the Tripoli government and trying to avert a possible military offensive against Sirte and the country’s oil crescent.

Harchaoui said he thinks the visit is a further indication that Egypt is aligning its Libya policies with Russia, drifting away from the United Arab Emirates since the Tripoli blockade.

“In the months preceding [Hifter’s] April 2019 attack on Tripoli, both Cairo and Moscow were of the opinion that the move was going to prove counterproductive. But Abu Dhabi went ahead and conducted a large air campaign in support of [Hifter's] offensive,” Harchaoui told Al-Monitor. “Since that point in time, Cairo has felt more comfortable with Moscow's sense of realism than Abu Dhabi's stubborn absolutism.”

Harchaoui said Moscow has been working quietly and gradually to render Hifter “less and less indispensable."

Although Cairo and Moscow don't agree on every detail, the Russian "approach makes much more sense” to Egypt instead of the UAE’s “rigid philosophy,” Harchaoui said.

“Right now, very concretely speaking, Egypt wishes to avoid a Turkish-backed Government of National Accord offensive into Sirte and the oil crescent,” he added.

Harchaoui also said the Emirati policy was doomed to fail from the get-go given Turkey’s strong military engagement in the country’s northwest. “Egyptians would prefer to delay war and, instead, revive economic ties with Tripoli,” he said.

Still, Harchaoui said he believes Hifter’s power should not be underestimated, considering that the strongman is still receiving military support from several military bases in western Egypt.

In sum, Egypt is trying to focus its efforts to strengthen its influence over the political settlement process in Libya without necessarily changing its point of view on the Libyan actors. Egypt clearly does not want to see Turkey and the Qatar-backed Muslim Brotherhood turn into a major force in its western neighbor. Egypt appears to realize that Turkey has the upper hand when it comes to the battlefield and thus is trying to curb Turkish influence through diplomacy without engaging into military conflict. Meanwhile, the rival Libyan factions also seem to be acknowledging Egypt's undeniable role in the conflict.

Turkey’s insistence on an approach that depends on an all-out victory of the Government of National Accord and all-out defeat of Hifter also facilitates this Egyptian strategy. Aiming to strengthen their international standing, the Government of National Accord factions' efforts to diversify their ties with regional and global powers, including Egypt, have been casting doubts on Ankara’s strategy, which is to turn its increasing military presence in western Libya into a trump card to secure its role in future Libya negotiations.

Flourishing ties between Egypt and the Government of National Accord also complicate Turkey’s efforts to secure its gains in the Libyan field, including the maritime demarcation deal with the Government of National Accord in November 2019. The accord, which became a mainstay of the Turkish claims in the eastern Mediterranean, remains without parliamentary ratification.