Contrary to the wave of more than 200,000 Israelis who have already visited the Emirates, tourists from the Gulf are just starting to arrive to Israel. 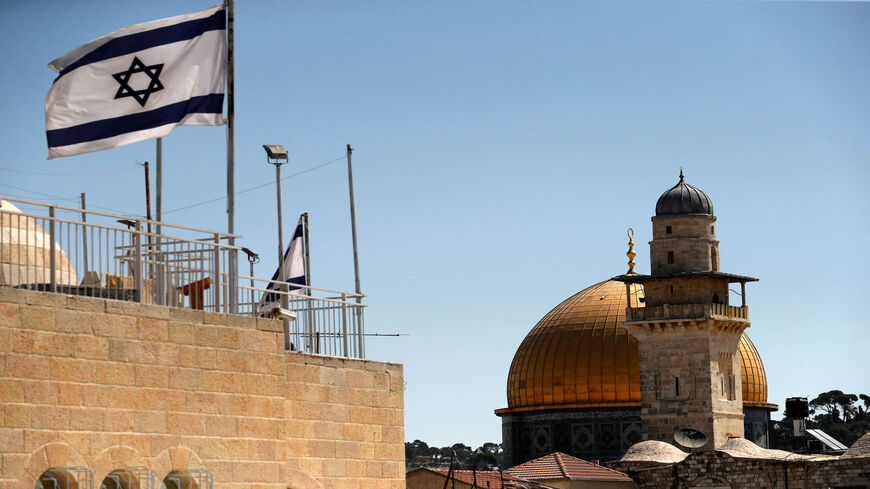 This picture shows an Israeli flag fluttering above a building near the Dome of the Rock mosque in the Old City of Jerusalem, July 18, 2021. - Ahmad Gharabli/AFP via Getty Images

It was an unusual sight Oct. 9 at the Western Wall in Jerusalem, Judaism’s holiest place. A group of tourists from Bahrain, wearing long robes and keffiyehs, stood alongside Jewish worshippers, and some even prayed to Allah themselves. One of the tourists pulled out an Islamic prayer rug, spread it out on the ground and knelt for the traditional prayer.

The worshippers, including several social media influencers, were part of one of the first groups of tourists to come to Israel. Fatima al-Harabi entered the women’s section at the Western Wall and inserted a note in between the ancient stones, as is customary. In an interview with a reporter from the public broadcasting corporation Kan she said that the site has great spiritual power and that in her note she asked for peace to arrive soon.

Harabi came as part of a group brought by the Sharaka organization, which aims to strengthen ties between Israel and Gulf states. Another member of the group, Salman al-Aoudi, told Al-Monitor that he had met Israelis on his travels elsewhere and his visit to Israel proved what he knew — that the country and people are beautiful and there could be a good relationship with them.

The tourists from Bahrain encountered at the places they visited many Israelis who were a bit surprised to see them, but they felt welcome. The locals asked to take photos with the Bahrainis, who wore their nation’s traditional garb. Aoudi said with a smile that an elderly woman had blown an air-kiss to him at the open-air Mahane Yehuda market in Jerusalem. The tour organizers took the group all over the country, including the mandatory stop for any tourist who wishes to understand Israel, the Yad Vashem Holocaust Remembrance Center. In interviews and tweets, members of the group said that this was one of the most meaningful experiences of the trip to Israel.

However, not everyone reacted positively to the visit. Photos of the tourists at the Western Wall angered opponents of the normalization agreements with Israel, which they expressed in sharp criticism and insults quoted in the Arab press. They were called “the new settlers” and some of the vendors at the Arab market in East Jerusalem treated them with hostility. In the past year, since the agreements were signed, a few incidents occurred where tourists from the Gulf were cursed, spat at or physically assaulted on visits to Haram al-Sharif.

The first tourists from Bahrain did not visit Haram al-Sharif, likely to avoid such conflicts. They arrived a few days after the direct flight from Manama to Tel Aviv was launched and after Foreign Minister Yair Lapid inaugurated the Israeli Embassy in Manama Sept. 30. Protests were held against normalization during his stay in Bahrain, which were covered by the Arab press in nations opposed to normalization with Israel.

Will the Abraham Accords, opening of embassies and launch of direct flights bring a wave of tourists from the Gulf to Israel?  It’s not clear. Flights in the opposite direction are very crowded. According to sources from both Israeli and Emirati administrations, more than 200,000 Israelis have visited the Emirates over the last year, many of them tourists and the rest businessmen. Bahrain, which is smaller, is also expected to receive many Israeli tourists.

Still, Israel is getting ready. A year ago, the Haaretz newspaper published a sort of guide for the Islamic tourist in Israel. It recommended visiting Haram al-Sharif, especially Al-Aqsa Mosque, considered one of the holiest sites in the Muslim world. Other recommendations were the Islam Museum in Jerusalem, which contains rare Islamic art collections, the cities of Acre and Ramle, which have a rich Muslim past, and other sites.

One of the people working to speed up incoming tourism from the Gulf is David Friedman, who served as the American ambassador to Israel in the Trump era and was instrumental in achieving the Abraham Accords. Friedman established an organization called The Friedman Center for Peace through Strength, one of whose goals is advancing the Abraham Accords and expanding them to more nations, among other ways, by bringing Muslim tourists to visit Israel.

Participants in the center’s inaugural event in Jerusalem Oct. 11 were former US Secretary of State Mike Pompeo, who received a prize for his contribution to advancing ties between Israel and Arab countries, former US Secretary of the Treasury Steve Mnuchin, Jared Kushner and Ivanka Trump, former Israeli Prime Minister Benjamin Netanyahu and even the famous quarterback Peyton Manning.

In an interview with Al-Monitor, Friedman said that the goal is to bring masses of Muslim tourists to Jerusalem, Israel’s capital, so that they could see that the reports they receive are biased, that Israel maintains and upholds the freedom of religion of all faiths, including Islam, and that it is possible to hold close ties with it despite differences in opinion. According to him, it is commonly thought that religion is one of the sources of conflicts, wars and violence, and that the time has come to change this and show that it is the opposite — that religion brings people of different faiths together, and that Jerusalem is the place to prove it.

“The road to peace passes through Jerusalem. The key to the Abraham Accords was the trust between a small group of people. When there’s trust there are no limits; when there’s trust, we can change the world. The role of Jerusalem is to unite the religions, and our vision is to bring tourism from the Arab world to the holy city so that all religions could visit and experience the uniqueness of this city,” Friedman said.

How would Israel overcome the opposition of Palestinians in East Jerusalem, for instance? “We will need security, that’s clear — but in the longer term when the Palestinians see how the agreements help them live better, with greater security and advancement in all fields, I hope they will end their opposition and join the process,” he answered.

Friedman expressed hope that the current American administration will not abandon its leading role in the peace processes between Israel and Arab countries, and will continue mediating and advancing additional agreements. “Without a steadfast United States, it won’t go forward,” he said.