The bill calls for the creation of a Palestinian state alongside a home for the Jewish people in Israel, which earned praise from a retired military commander in Israel's Knesset. 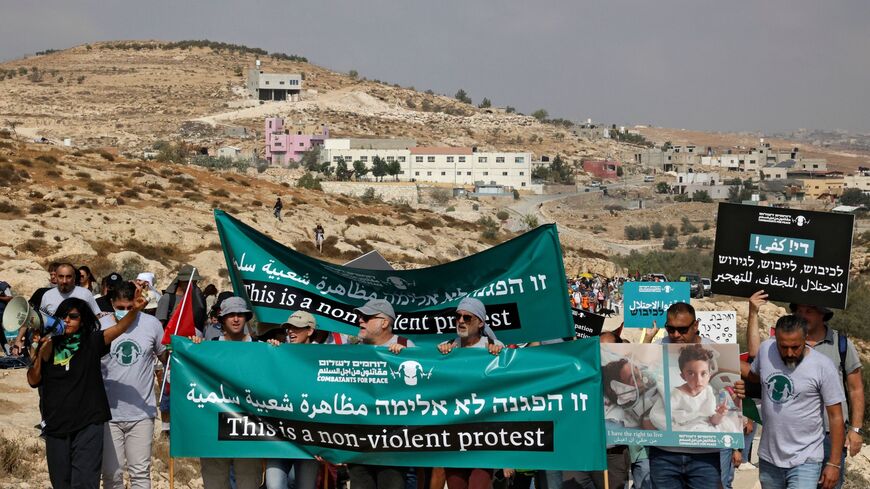 Palestinian demonstrators and Israeli activists, from the Combatants for Peace movement, attend a demonstration against Israeli land confiscation and the cutting of water supply for Palestinians villages in the West Bank town of Hebron on Oct. 2. - HAZEM BADER/AFP via Getty Images

An Israeli politician on Thursday praised a bill in Congress that calls for a two-state solution to the Israeli-Palestinian conflict.

Democratic Rep. Andy Levin of Michigan introduced the Two-State Solution Act last week alongside four other Democrats. The bill aims to support conditions leading to a viable Palestinian state alongside an Israeli state that is a homeland for the Jewish people. To this end, it calls for funding of peacebuilding and diplomatic initiatives between Israelis and Palestinians. It also stipulates that US assistance to Israel cannot be used for the occupation or annexation of Palestinian territory. These goals are consistent with the views of the American Jewish community, according to a release from Levin’s office. The “pro-Israel, pro-peace” Jewish organization J Street supported the legislation.

Member of the the Israeli Knesset Yair Golan praised the bill on Thursday, calling it a “good law” in a Hebrew-language post. Levin in turn said he was “honored” to receive an endorsement from Golan, who is a retired military commander and member of the left-wing Meretz party.

“I'm incredibly honored to have MK Yair Golan, member of Israel's coalition government & retired major general, endorse the Two-State Solution Act and to see the impact our movement is having,” Levin tweeted.

Support for Israel is an increasingly divisive issue in Congress, and there is a vocal minority of progressive Democrats who oppose US support for Israel due to its treatment of Palestinian people. Most members of Congress continue to back assistance to Israel, however, and a bill to fund Israel’s Iron Dome air defense system overwhelmingly passed in the House of Representatives last month.