After once threatening to sit out the elections, the Sadrist movement has embarked on a media and political campaign to increase election turnout. 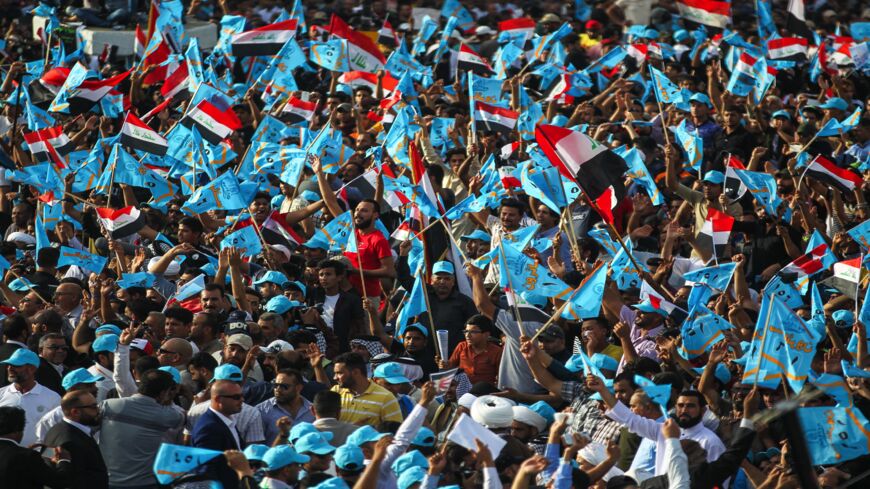 Iraqi supporters of Shiite leader Muqtada al-Sadr raise flags of their "Marching Toward Reform" electoral alliance during a campaign rally in the capital, Baghdad, on May 4, 2018. - AHMAD AL-RUBAYE/AFP via Getty Images

Muqtada al-Sadr's Sairoon political bloc pledged on Sept. 30, to implement its program for state administration within three years if it wins the post of prime minister in the October 2021 elections. The pledge was made in front of Sadr's residence in Kufa. The program includes building schools and hospitals, restricting arms to state institutions, ensuring social security, and advancing the agriculture and industry sectors.

The Sadrist movement has been sending to its opponents since Nov. 27 the message that it has the largest popular base and can mobilize its supporters in a demonstration calling for the movement to be tasked with forming a government.

On the external level, Sadr is seemingly seeking to show that his movement is a moderate and active political force.

However, Sadr's enthusiasm is not devoid of concern and hesitation. And if the Sadrist movement is to be tasked with forming a cabinet, he said he does "not want to sacrifice the reputation of my fathers” — given that he comes from a Shiite religious family.

Speaking to Al-Monitor, Sattar Jabbar, a member of parliament for Sadr’s Sairoon Alliance, justified his alliance’s quest. “Sairoon has been the largest bloc in all cycles, and we will be the largest bloc par excellence in these elections as well. This is what the street tells us. That is why the premiership needs to be a 100% Sadrist, and all necessary measures have been taken to make it a success domestically and abroad,” he said.

Political Leadership and Governance Development Academy head Abdul Rahman al-Jebouri, speaking to Al-Monitor, questioned the Sadrist movement’s ability to run a successful government. He said, “The internal reform that the Sadrist movement is calling for, and the recently announced program that is not up to the aspirations of the bloc’s supporters and members, does not offer the rest of the Iraqis the state of safety, freedoms and prosperity they aspire for.”

He added, “The Sadrists do not have the experience to manage the complex and thorny domestic situation. For many years, they have benefited from the state and have mastered blaming the governments for corruption, although a third of the state employees in charge of managing the institutions are affiliated with them. That is at the local level. Internationally, foreign relations involve the management of mutual interests between Iraq and the world, and the representation of a complex state in which the interests of the East and the West are intertwined and conflicting, let alone the interests of each of the Iraqi components. All of these are not tailored to the taste of the Sadrists.”

Jebouri noted, “We have not seen any Sadrist politician, parliamentarian or executive who excels in foreign relations so far. The movement’s positions are improvised.” He said “all of the above-mentioned reasons would result in a Sadrist government that is internally besieged and isolated from the outside world if they insist on leading it.”

However, Sadrist parliament member Sabah Akili told Al-Monitor there are no obstacles that would prevent the movement from being in charge of forming a cabinet. “The Sadrist movement is focusing on the premiership, considering it the way to reconstruction and ending corruption,” he said.

Commenting on the movement’s tactics, he stated, “We rely on our large popular base, our influence on the Iraqi arena and our relations with our future allies that we are coordinating with.”

Akili added that “the movement’s demand is not unfounded. It has 4 to 5 million supporters. It is a right that any party has the right to claim.”

"The movement worked on this goal long before the elections. Today, he is qualified to have the post of prime minister so as to bring about a radical and comprehensive change," he said.

Yet things are not that simple, said Abbas Abboud, editor-in-chief of Iraq's al-Sabah daily. He told Al-Monitor, “The chances of the Sadrist project’s success are subject to calculations. The designation of the prime minister in Iraq does not depend on the size of the parliamentary bloc. Rather, it depends on the alliances after the elections and a consensus between Tehran, Washington and Najaf.”

Commenting on the Sadrist movement’s claim for the post of prime minister, Ihsan al-Shammari, who heads the Iraqi Political Thinking Center, told Al-Monitor, "It is part of an electoral propaganda and messages sent to Shiite forces that they need to take into account the opinion of the movement regarding the figure that will be designated in this post.” Shammari added, “It is also a message to the Sunnis, the Kurds and the outside that the movement is an active force and that it is on the threshold of a new stage.”

“The Sadrist movement senses that there is an undeclared alliance seeking to disregard its opinion when choosing the prime minister," Shammari said, adding, “The next prime minister will be selected based on a consensus."

He noted that “the Sadrists are talking about reforms, but this program did not include any timeline or a work plan to do so. It is similar to all previous programs of other forces. This will not succeed unless there is a political will in favor of the next cabinet's program.”

Ostensibly, the Sadrist movement is flexing its muscles ahead of the legislative elections in order to make its voice heard, stress its presence and underscore that whatever the results, it will have the final say in the political process.