Representatives of the demonstrations and independent candidates did well in the Iraqi elections, unsettling many existing political elites. 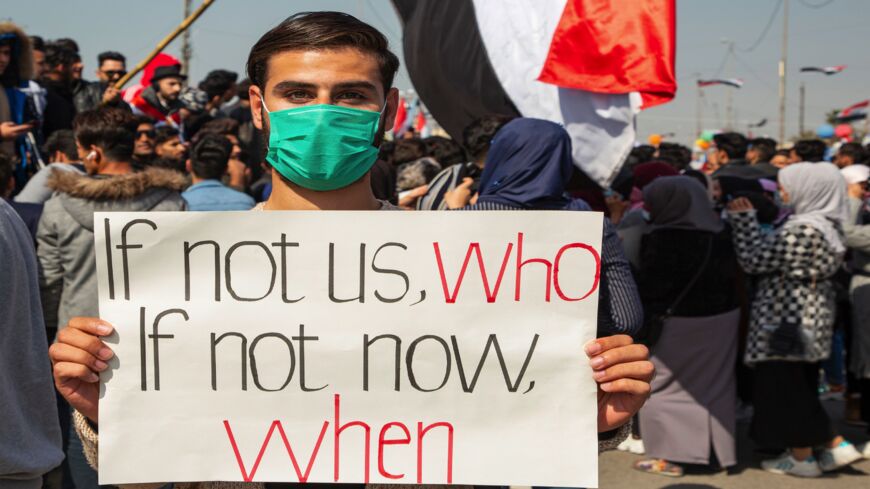 An Iraqi demonstrator holds a placard during an anti-government demonstration by Basra University students in the southern city of Basra, on Feb. 11, 2020. Mass rallies have rocked Baghdad and the mainly Shiite south since October, with protesters demanding snap elections and an independent prime minister as well as accountability for corruption. - HUSSEIN FALEH/AFP via Getty Images

A group of independents and representatives from the October Movement plan to form an independent parliamentary bloc to oppose powerful forces and parties in the political arena.

Iraq's Independent High Electoral Commission announced on Oct. 17 the final results of Iraq's elections. Independent candidates and representatives of the October Movement won 40 seats. The Sadrist movement, led by Muqtada al-Sadr, placed first with 73 parliamentary seats out of 329, followed by the Taqaddom alliance with 37 seats and the State of Law Coalition with 34 seats. The Kurdistan Democratic Party, the ruling party in Kurdistan, won 32 seats. The Fatah Alliance, which represents the political wing of the Popular Mobilization Units, won 17 seats, and the Kurdistan Alliance, which includes the National Union and other Kurdish forces, won 16 seats.

While preparations are underway to establish a new civil alliance in parliament that includes representatives from the Emtidad Movement, which represents the popular protests, winning candidate in the parliamentary elections in Nejev Hadi Hassan al-Salami told Al-Monitor, “The Oct. 18 meeting between independent candidates and representatives of the October demonstrations has resulted in a rift between candidates who will join the opposition and others who prefer independence from the opposition and the government.”

Salami revealed that the "candidates representing the October demonstrations are affiliated with the Emtidad Movement only … [there] are nine.”

He added, “Not all the participants in the demonstrations, including myself, joined the October parties.”

“Independents and the October Movement people will likely get about 25 parliamentary seats,” he said.

Salami added, “The representatives of the protests agreed not to ally with influential parties, and coordination will be restricted to independents to form an opposition bloc that adopts an anti-corruption approach and strengthens parliamentary oversight.”

But Manar al-Obeidi — spokesperson for the Emtidad Movement, which won nine parliamentary seats — is optimistic. "Advanced dialogues [about forming a large bloc] have begun,” he said. He expects “the large bloc to secure about 70 parliamentary seats" and described the movement as a “political alternative to parties that failed to run the state.”

Hisham al-Sayyab, a professor at the University of Kufa, told Al-Monitor, “The independents surprised everyone by reaching parliament. Despite the number of parliamentary seats they will occupy, they will not be able to achieve the required change because opposition is easier than power.”

Legal expert and observer of Iraqi affairs Tariq Harb said he does not expect independents to "have a significant impact on the course of decisions in parliament because some of them will rush to join some traditional blocs." "Besides," he added, "they will not be loyal to the sacrifices of the October uprising.”

Community activist in good governance and anti-corruption Saeed Yassin Moussa said it was "necessary for the protesting youth to organize themselves to participate in the first elections after the protests.”

Moussa said, "Iraqi elections resulted in more than 30 independent winners who have a great opportunity to lay the first building blocks of the political process apart from the large, known blocs.” He called on them to “adopt clear public policies and try to pressure and gain support for the legislation of laws and reform of the political system, both by participating in the rule or through opposition.”

Moussa advised winning candidates from non-influential parties not to "raise the bar too high for demands." Rather, he said, they should "analyze the governance environment and its structure and the separation of powers, and support the supervisory institutions and complement them with proactive oversight.”

Secretary of the Iraqi Communist Party Raed Fahmy said in an interview with Al-Monitor, “The common grounds between independent parliamentarians and those close to the popular movement can lead to forming parliamentary opposition and refraining from participating in forming a government that repeats the same previous approach. This is the correct and peaceful approach.”

"Independents and [members of the] October Movement occupying seats in the new parliament should work to establish relations with forces supporting the movement and advocates of change outside parliament, including political forces, civil society organizations and trade unions, because none of the parties will be able to face the corrupt quota system alone," Fahmy said.

Political analyst Fadel Abu Ragheef from the Center for Moderation sounded optimistic. He told Al-Monitor, “The October protesters, especially the independents, succeeded in crossing the first barrier, which was the elections. The second is the formation of a political coalition that has a strong parliamentary bloc, and they are able to do so.” Ragheef added, “The political alliance of independents and Octoberists will have the tools for change and for setting a different parliamentary equation.”

Ghaleb al-Daami, media professor at Ahl al-Bayt University, told Al-Monitor, “Independents and Octoberists, in addition to other winners who were nominated on their own, will win about 40 seats and perhaps more. Their influence in parliament will not be quick and might even take a year after the formation of the new parliament.”

Daami expected the current large parliamentary blocs to disintegrate because "they are based on a heterogeneous fabric and independent tribal figures, which will take another direction if they no longer have a horse in the race.”

He added, “The representation of the independent blocs in the provincial councils after their election will be much greater than their parliamentary representation, provided that the October independents avoid mistakes by choosing one candidate who would get many votes — which could have been capitalized on to help more than one candidate reach parliament.”

Makki al-Sultani, an Iraqi civil activist and politician, said, “The result of the parliamentary elections was an unexpected surprise for the parties in power, and that is why they rejected the election results.”