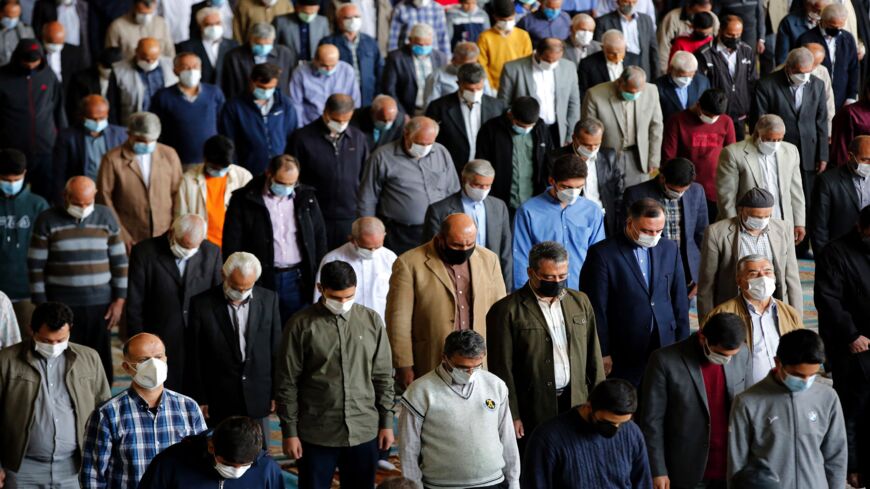 Mask-clad Iranians gather in a mosque in the capital, Tehran, to perform Friday prayers for the first time after authorities eased some restrictions put in place for over a year in a bid to stem the spread of the coronavirus, on Oct. 22, 2021. - AFP via Getty Images

China in the Mideast
Coronavirus
October 22, 2021

Tehran held public prayers on Friday for the first time since coronavirus concerns in March 2020 prompted the Iranian government to halt the weekly religious service.

Worshippers attending the service at Tehran University were required to social distance and wear face masks. The resumption of Friday prayers comes as 400 Muslim scholars and religious leaders gathered in the Iranian capital for the 35th annual International Islamic Unity Conference, which began on Tuesday.

“Today is a very sweet day for us. We thank the Almighty for giving us back the Friday prayers after a period of restrictions and deprivation,” Reuters quoted Mohammad Javad Haj Ali Akbari, the imam who led the service, as saying.

Iran has experienced the worst coronavirus outbreak in the Middle East, with more than 5.8 million recorded cases since February 2020. On Tuesday, Health Minister Bahram Einollahi said he was “certain” that Iran would experience a sixth wave of the virus.

Iran's Health Ministry said on Friday that 165 more Iranians have died from COVID-19. The official death toll stands at nearly 125,000 people, although experts and Iranian officials say the actual tally is likely much higher.

Iran’s vaccine rollout was slowed by Supreme Leader Ayatollah Ali Khamenei’s ban last January on American- and British-made vaccines, which he described as “untrustworthy.” Iran has since vaccinated about 40% of the population of 80 million, health officials say.

The country is mostly administering the Chinese-made Sinopharm vaccine, in addition to its own locally made vaccines. Despite the Western vaccine ban, Iran in September also approved the use of the US-developed Johnson & Johnson vaccine.