After Brazil was elected a nonpermanent member of the UN Security Council, Brazilian support for Egypt in the Grand Ethiopian Renaissance Dam crisis gained momentum. 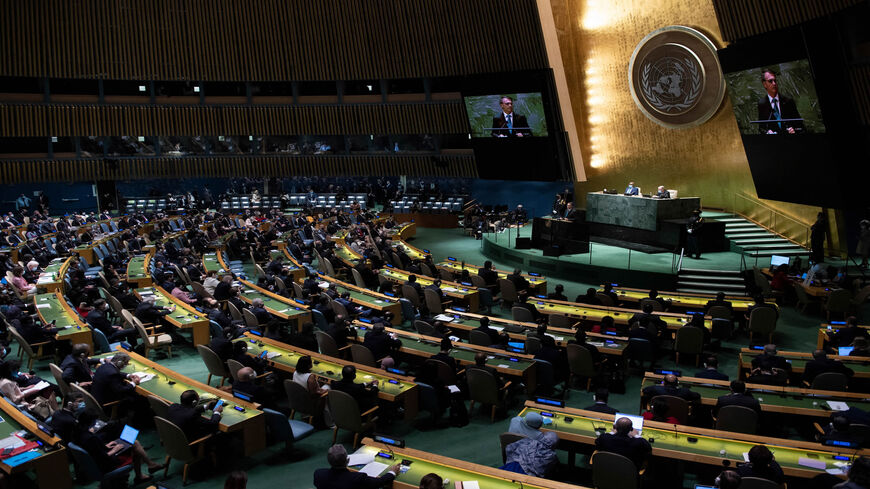 Egypt is trying to win Brazil’s support in the Grand Ethiopian Renaissance Dam (GERD) crisis by capitalizing on Brazil's accession in June to the nonpermanent membership of the United Nations Security Council.

Egyptian President Abdel Fattah al-Sisi discussed with Brazilian Vice President Hamilton Mourao, during his visit to Cairo Sept. 28 the latest developments regarding the GERD crisis, including the recent statement by the presidency of the UN Security Council.

The statement issued Sept. 15 called for the compliance of all parties to the GERD crisis — Egypt, Ethiopia and Sudan — to reach a legally binding agreement on the filling and operating of the dam “within a reasonable time frame.”

During his meeting with Sisi, Mourao expressed his country's understanding of Egypt's position in the GERD crisis since the Nile River waters are important to Egypt’s water and food security.

For Egypt, it seems important to secure Brazilian support in the GERD crisis, after the UN General Assembly elected June 11 Albania, Brazil, Gabon, Ghana and the United Arab Emirates to join the nonpermanent membership of the Security Council, for a period of two years starting on Jan. 1, 2022.

Observers believe that Cairo is trying to win over influential international powers in the Security Council in anticipation of resorting to the council again, if the GERD crisis escalates.

Egyptian Ambassador to Brazil Wael Aboul Magd confirmed in a press statement Sept. 28 the “importance of Brazilian-Egyptian coordination” in the current period with regard to international and regional issues, especially the GERD, in light of Brazil’s nonpermanent membership at the Security Council in 2022 and 2023.

Egypt is also trying to secure Brazilian support by consolidating trade and economic relations. On Sept. 28, Magd said, “The volume of trade exchange between the two countries ranges annually between $2.5 billion and $3 billion.”

He noted, “There are great opportunities and huge potential to establish a real economic partnership between Egypt and Brazil and joint projects to capitalize on the strengths of each. With that, Egypt becomes Brazil's gateway to the Arab region and Africa, and Brazil becomes Egypt's gateway to Latin American markets.”

Magd continued, “Egyptian and Brazilian trade relations depend to a large extent on the agricultural sector.”

During Mourao’s Sept. 28 visit to Cairo, the two countries agreed to open a regional office for the Arab-Brazilian Chamber of Commerce in Cairo.

Speaking at the inauguration of the chamber’s office in Cairo Sept. 29, Egyptian Minister of Trade and Industry Nevine Gamea said, “Opening the regional office of the Arab-Brazilian Chamber of Commerce in Cairo will play a pivotal role in serving the common interests of Egyptian and Brazilian businessmen, supporting commercial cooperation and facilitating the movement of goods and services between the two countries.”

On the same day, Egypt and Brazil also agreed to operate a direct flight between Cairo and Sao Paulo, to facilitate trade movement between the two countries.

Cairo is also seeking to boost cooperation with Brazil in the military field. On Sept. 28, Egyptian Minister of Defense Lt. Gen. Mohamed Zaki agreed with Mourao to increase the fields of military cooperation and to transfer and exchange expertise between the armed forces of both countries.

Meanwhile, Sudan was also keen on rapprochement with Brazil through economic cooperation. During a March meeting with Brazilian Ambassador to Sudan Patricia Maria, Sudanese Minister of Investment Al-Hadi Mohamed Ibrahim said, “Sudan is open to all Brazilian investors to benefit from the Brazilian experience in agriculture, animal wealth, aviation and information technology.”

Sudan also seeks to boost its relations with Brazil through sports and soccer. Sudanese Minister of Youth and Sports Youssef Adam Al-Dhai agreed with Maria in March to co-produce a film that talks about the passion of the Sudanese and Brazilian people for soccer.

Ethiopia also moved toward rapprochement with Brazil. In May, the second Ethiopian-Brazilian joint political summit was held with the participation of the Ethiopian minister of state for foreign affairs, Redwan Hussein, and his Brazilian counterpart Kenneth da Nobrega.

Hussein said back then, “Ethiopia is ready to work with Brazil in various fields, especially in the field of cooperation in the agricultural sector.”

Nobrega also stressed that his country is ready to invest in modern agriculture and agro-processing sectors in Ethiopia.

Former Egyptian Minister of Irrigation Mohamed Nasr Allam told Al-Monitor, “Egypt is trying to benefit from the experience of resorting to the Security Council. That's why it is trying to win over any influential country in the council.”

Allam said, “The future of the GERD crisis is not yet clear, [amid concerns] the crisis might slip into military escalation. Therefore, it is important to work to win over the influential forces in the Security Council, which might have to intervene in the crisis then.”

He pointed out that “Brazil's accession to the Security Council gives it great importance to Egypt, and consequently Brazil's support in the GERD crisis gives Cairo strength in the council."

Allam noted, “There is a history of relations between Egypt and Brazil, which gives the two countries a clear opportunity to consolidate ties, especially in the trade and economic fields.”

He added, “The current crisis between Egypt and Ethiopia is pushing Addis Ababa to advance rapprochement with any international party siding with Egypt.”

Allam concluded, “In the coming phase, Ethiopia, Egypt, and Sudan will try to consolidate relations with any influential country in general and within the Security Council in particular.”