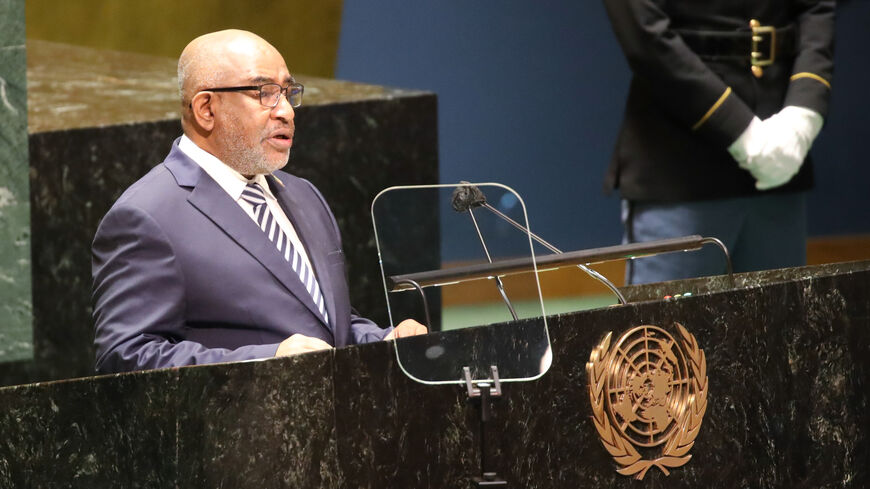 President of Comoros Azali Assoumani speaks at the 76th session of the United Nations General Assembly at the UN headquarters on Sept. 23, 2021 in New York City. - Spencer Platt/Getty Images

Reports yesterday say Israel and Comoros are in talks to establish diplomatic relations. The Islands of Comoros is a Muslim-majority country and member of the Arab League. If it happens, Comoros will be the fifth Muslim country to either normalize ties with Israel or advance normalization in the last year, in the framework of the 2020 Abraham Accords. These American-sponsored agreements brought about normalization of diplomatic ties between Israel, the Emirates, Bahrain and Morocco. Sudan is apparently also on its way to finalizing normalization.

While the Israeli Foreign Ministry did not react to the Comoros reports, Foreign Minister Yair Lapid said at his joint Oct. 13 press conference in Washington with Secretary of State Antony Blinken and Emirati Foreign Minister Abdullah Bin Zayed al Nahyan, “We are working on expanding the Abraham Accords. But first and foremost, we want to make sure that the current agreements we have will be a success story. And it is so far a success story. … We are going to push forward as hard as we can on this while working on expanding the Abraham Accords to other countries, including the ones you don’t think of.”

Which other countries? Minister of Regional Cooperation Esawi Frej told Emirati website Erem News yesterday that Qatar, Tunisia, Oman and Malaysia may join the Abraham Accords. “Every Arab country in the Middle East, even the hostile countries, we have direct and indirect relations with them. I see on the far horizon that all the countries of the Middle East will be within a union," said Frej.

The Abraham Accords were one of former Prime Minister Benjamin Netanyahu’s greatest diplomatic achievements. Lapid has acknowledged this fact on several occasions, but seems to be aiming even higher.

Lapid’s diplomatic schedule has been busy. Yesterday, he met at the ministry with his Swedish counterpart Ann Linde. Israel and Sweden have long differed over the Palestinian issue. This diplomatic conflict worsened in 2014, when Sweden became the first European Union member state to recognize Palestine. Linde's visit was the first such in almost a decade, clearly signaling willingness by both countries to open a new chapter in their relations.

Israeli Ambassador to Sweden Ziv Nevo Kulman took office mid-September. Mending diplomatic relations between the two countries has been his first priority, and evidently Lapid agreed as well as their Swedish counterparts. Diplomatic sources told Al-Monitor that while the Abraham Accords played a part in creating this window of opportunity, the main driver was the new Israeli government and its agenda.

Interestingly, at their joint press conference, Lapid shared his personal family attachment to Sweden: His father was saved during World War II by the Swedish diplomat Raoul Wallenberg. Linde, for her part, highlighted Sweden’s friendship to Israel and its commitment to its existence and security. She even briefly mentioned Iran. While it's unlikely Jerusalem has found a new ally in its campaign against the nuclear agreement, Stockholm could prove friendlier to Jerusalem when issues related to Israel are brought up in the EU headquarters in Brussels.

Lapid also met yesterday with his Indian counterpart Subrahmanyam Jaishankar. The Indian minister arrived to Israel with his wife and was hosted by Lapid and his wife for a tour at the Shalva school for handicapped children, a cause dear to the Lapids' hearts. During the meeting at the Foreign Ministry, Israeli Energy Minister Karine Elharrar signed an agreement committing Israel to the International Solar Alliance, initiated by India in 2015.

Netanyahu had long fostered close ties with Indian Prime Minister Narendra Modi, bringing the two countries strategically closer. Jaishankar's visit can be seen as a test for Lapid to top Netanyahu. He got help from across the ocean as Blinken hosted a Zoom meeting with Lapid, Jaishankar and Bin Zayed. A statement by the State Department said the four of them discussed “expanding economic and political cooperation in the Middle East and Asia, including through trade, combating climate change, energy cooperation, and increasing maritime security.”

On July 8, shortly after taking office, Lapid traveled to Jordan for a meeting with Jordanian Deputy Prime Minister and Foreign Minister Ayman Safadi. The visit bore fruit Oct. 12, when Elharar signed with her Jordanian counterpart an agreement for Israel to double the quantity of water supplied to the Hashemite kingdom. On Sept. 12 Lapid presented his vision for a long-term settlement between Israel and the Gaza Strip and on Sept. 19 he spoke with his Egyptian counterpart Sameh Shoukry. It's being reported this week that the Biden administration is pushing for Sudan to officially reestablish ties with Israel next month. If this happens and Comoros joins in, Lapid will give Netanyahu a run for his money.