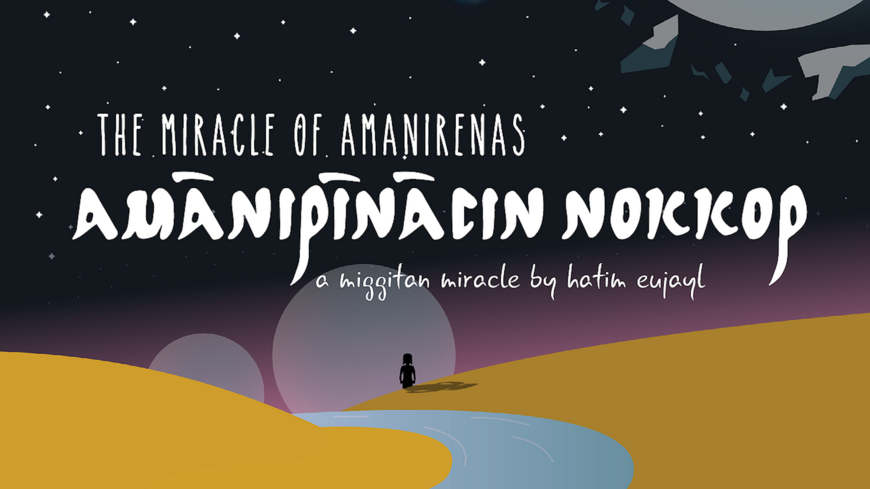 One of the first collections of children’s books ever published in Nobiin, the most-spoken Nubian language in southern Egypt and northern Sudan, went to print in September. The books by three Nubian-Sudanese authors are written in the ancient alphabet used in Old Nubian manuscripts for centuries. The project is a collaboration with the independent publishing house Taras Press in London.

The collection consists of four illustrated books intended to introduce the Nubian alphabet, one of the oldest African writing traditions, to children. The books teach how to read, write and count in Nobiin and two storybooks are designed to build vocabulary and build the body of literature in Nubian and about Nubia. The project was financed through a crowdfunding campaign.

The collection “is ultimately made to be comprehensible to those who are already Nubian literate, and those who learn to be Nubian-literate through our books will hopefully be able to read most of what is written in Nubian,” Hatim Eujayl, one of the writers, told Al-Monitor.

Old Nubian is a literary language appearing in texts from the 8th to the 15th centuries in the Nubian kingdom of Makuria, located in what is today southern Egypt and northern Sudan, making it one of the earliest written languages in Africa and perhaps as old as the earliest written English. Present-day Nobiin has direct roots in Old Nobiin and is today the largest Nubian language with speakers mainly in Egypt, Sudan and the diaspora.

Old Nubian stopped being written mainly due to the dissolution of the Nubian kingdom of Makuria, which had held it as its official language, and the Ottoman occupation of Lower Nubia, which accelerated its Arabization and conversion to Islam. Speakers of Nobiin, which has declined in use and become endangered, have since turned to Latin and Arabic scripts

Yet in the 1990s, following a resurgence of Old Nubian among the community, Nubian activists led initiatives to revive the alphabet and advocate its use. They are credited with laying the foundations of modern Nubian orthography.

“The history of the efforts to revive Nubian began in full force in the 1990s with Nubian activists, Eujayl said, adding that Cairo University professor Mukhtar Khalil Kabbara "simplified and defined modern Nubian orthography and had this terrific influence in how people write Nubian today.”

“One of the things that inspired me and pushed me to do it is because there are Nubian language books out there but they are more intended for academics and people with a background in linguistics and someone aware of languages,” Ramy Dawoud, another author, told Al-Monitor. “For regular people, and for children specially, I did not find anything. And nothing that is done in a modern way, that is attractive,” he added.

The writers faced two main challenges. The first was technical, as there is very little digital support for writing in the Nubian alphabet. To overcome it, Eujayl developed the first publicly available Nubian typeface, Sawarda Nubian, based on Old Nubian manuscripts.

The second challenge was how to actually use the script to write the books. According to Eujayl, here lies the main debate among those trying to revive the Nubian script. After five centuries of disuse, those who do write Nubian today do not share a coherent and consistent orthography.

“Although Old Nubian was written for almost 1,500 years, the Nubian languages spoken today have changed in the last 500 years since it was written,” Joel Mitchell, founder of Taras Press, explained to Al-Monitor. “So it is not straightforward to write in it, because there are different approaches to representing it as it is spoken today.”

Here, their achievements are more limited. Eujayl said that they have found it difficult to access discussions on different orthographical approaches, and noted that they found little desire among advocates of particular approaches to accommodate the others.

He also explained that their ability to make judgment calls was limited as they are not fluent speakers. Ultimately, they decided to follow Kabbara's methods, on which there is substantial consensus.

“I think I overestimated the importance of reaching consensus when the usage of the script is still so low,” Eujayl said. “The number of people who write in Nubian is very small, thus orthography debates are mostly had by a small sphere of academics who are expectedly dogmatic about their approaches,” he added, and noted, “In terms of reaching consensus or having a [well documented and] systematic approach, there's still so much work to be done.”

When non-academics begin to use the script widely, "there will be more material to inform a real discussion,” he predicted. “Hopefully, these books help push us in that direction by broadening the circle of the Nubian literate.”