The Egyptian government is working to direct Nubians' attention away from the controversial displacement issue, pouring investments into Nasr al-Nuba village. 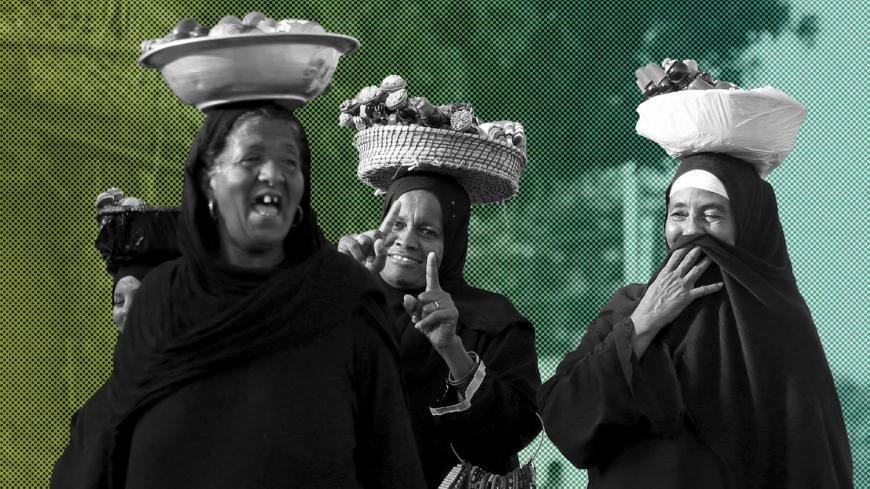 For two consecutive days, Egyptian President Abdel Fattah al-Sisi headed the second round of the National Youth Forum, this time taking place in the southern city of Aswan. The president did not address the decades-old lingering issue of Nubian displacement. While he spoke of making Aswan a hub to African cultures, the historical city is struggling to keep its own culture alive.

“The government is striving to turn attention away from the displacement issue,” said activist Seham Osman, describing how efforts and investments are being poured in the new Nasr al-Nuba area.

Pro-state business tycoon Ahmed Abou Hashima is investing in Nasr al-Nuba. In December, he opened the New Toshka Village, and the company he heads, Egyptian Steel, even released a song for the occasion. The Principal Bank for Development & Agricultural Credit opened up a branch in Nasr al-Nuba, offering greatly facilitated loans as low as 4,000 Egyptian pounds ($242) for establishing projects in the new area. The only condition is being a resident there. The government has also allocated 270 million Egyptian pounds ($16.4 million) to develop Nasr al-Nuba villages.

“I reject investments in Nasr al-Nuba and will continue to fight for our right to return to our original lands,” said rights lawyer Mohamed Azmy.

Azmy, who organized a Right to Return Caravan in November to raise awareness and protest for the cause, had filed a case against Sisi in 2015, calling on the abolishment of Presidential Decree 444. Issued in January 2016, the decree designated a large stretch of Nubian land adjacent to Egypt’s border with Sudan as a newly restricted military zone. It includes 18 Nubian villages to which the residents had been hoping to return.

With the mass displacement in the 1960s, part of the Nubian identity was changed. Traditions related to the Nile, including wedding and birth celebrations, were lost as the residents moved to the desert for the construction of the High Dam, Azmy said.

As his legal and political defense continues, the lawyer has also set up a platform to protect the cultural heritage of Nubia.

Heading a team of 39, and with the hopes of reviving the value of the Nubian language as a mother tongue, Azmy launched NubaTube. The Nubian language is mostly spoken, not written, and is not a part of Egypt’s education system, making it more prone for extinction.

The channel has a socio-political mission: asserting the cultural and media rights of Nubians to reinforce social diversity, spreading Nubian culture among all ages and social segments, and further developing this culture and halting its demise.

Programs on NubaTube discuss women, history, documentaries, literature, heritage arts and culture. The channel goes live daily for two hours, translated into several languages, among which is English. The founder is looking to increase air time to reach five hours a day.

“We aim at helping new Nubian generations in realizing their original identity, and to enrich and develop this identity,” Azmy said.

On the other hand, the Nubia Initiative (TNI) is leveraging arts, academia and technology to safeguard the cultural heritage, while rejecting the polarized politicization of Nubia.

“We find that the politicization of the plight of the Nubian people has done far more harm to our cause than good. When founding TNI we wanted to shift this approach,” co-founder and managing director Dimah Mahmoud told Al-Monitor. The problem is twofold, Mahmoud said. “First, the facts are skewed, and second, heritage and identity remain now only a memory in a quickly diminishing culture of oral history,” she said.

To rectify that, instead of taking the political route, TNI is collaborating with the art and academic communities worldwide to document facts to protect, preserve and promote Nubian heritage.

The initiative is working on multiple fronts. Currently in the works is a strategic workshop in partnerships with FUTOUR, an innovative, problem-solving hub based in Italy, to address the opportunities and challenges of using technology to revitalize endangered languages. All the participants are international academics on Nubian and/or endangered language revitalization. TNI is also organizing and presenting at conferences and art exhibitions, the most recent being a series on Nubian art exhibited in Venice that is now en route to the UK for an exhibition co-organized by the Nubian Languages Culture Project and the Wye Valley Society. The event, which will be held Feb. 23 at the University of Exeter, is called “A Tale of Two Rivers: The Lower Wye and the Nubian Nile” and focuses on the importance of the environment for the flourishing of intangible heritage.

With the digital age providing tools for innovative presentation and wider reach, the power of social media was notably facilitated for the Nubian cause. One Facebook page named Humans of Nubia was set up to document today's daily life of the timeless residents of Aswan.

“Our history is being erased in a systematic manner,” said Mohamed Mostafa, founder of the Facebook page Nubian Geographic, who criticized the constant traditional depiction of the Nubian as a poor butler or a bawab, usually with the name “Am Othman.”

“There is more to Nubian history than that,” Mostafa said, highlighting how Nubia contributed to Egyptian civilization.

Kings of Nubia ruled Egypt for about a century during the kingdom of Kush, which held sway from about 1070 B.C. to about 320 A.D. The Meroitic period left 250 pyramids behind, and temples still stand in Egypt and Sudan — once a unified land — at the sites where Nubian rulers wrote their history. This location had been an intersection of diverse cultures, connecting the Mediterranean world with "tropical" Africa, and had been an important trade route between sub-Saharan Africa and the rest of the world.

For the purpose of changing the incorrect perception of Nubians and digging up the forgotten history, Mostafa created the page in 2015. Photographs of old communities, paintings and statues, maps, historical sites and monuments along with traditional sayings and excerpts of books about Nubia fill the page.

Colors and music flare up throughout Aswan as festivities take a share in the revival movement.

In November, Germany's Goethe and Robert Bosch institutes set up a camp and festival for Nubian children under 14. Recreational activities and games, accompanied by basic Nubian language lessons, emphasized the kids’ cultural diversity and how different their culture is from more common ones. The campers were encouraged to write and blog about their culture, decorate Nubian houses and learn traditional handcrafts.

The festival "Nubia in Colors" has brought together residents, artists and bands from Nubia and other governorates to paint houses in 50 villages, raise awareness and create a cultural musical blend.

The 4-year-old project was launched by Konouz Nubia, a foundation working for economic empowerment through heritage. Established in 2012, Konouz has been supporting local industries that draw from the Nubian heritage, which in turn helps with sustainable development and enables Nubians to preserve and discover more about their past. The foundation helps in strengthening their bond with their land, and in building bridges of communication between Nubia and the rest of the governorates.