Egypt’s Nubians protest for right to return to their lands

Nubians in southern Egypt have staged demonstrations and roadblocks in recent days, protesting a government takeover of what they claim to be part of their ancestral homeland. 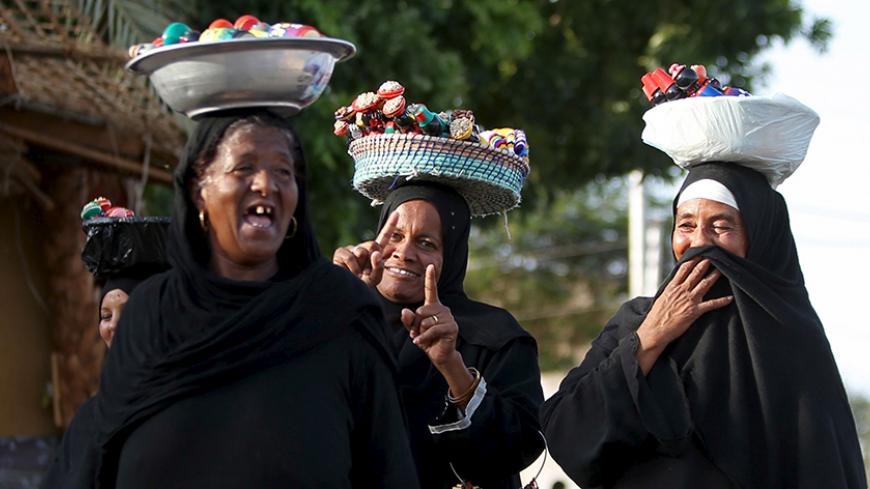 CAIRO — “The revolution might gush out of the south, just like the Nile does.” With this slogan, Nubians raised their voices once again in protest of the Egyptian administration's putting part of their lands up for sale to investors. This prompted them to demand their right of return and repatriation to their homeland from which they were displaced when the Aswan High Dam was built in the 1960s.

The crisis was renewed when many Nubians protested as part of the so-called Nubian Return Caravan, in an attempt to reach the Nubian Toshka and Forkund villages to protest the sale of their lands as part of President Abdel Fattah al-Sisi’s national development project to reclaim 1.5 million feddans (2,432 square miles). On Nov. 19, the security forces obstructed the caravan’s arrival. Consequently, the protesters staged a sit-in on the road leading to the disputed land.

Munir Bashir, the head of the Coordination Committee of the Nubian Return Caravan, told Al-Monitor over the phone from the sit-in spot on Abu Simbel-Toshka highway, “The caravan wanted to voice Nubians’ objection to the government’s decision to sell their lands. But we were surprised with the security’s arbitrary measures to stop us from reaching our destination. They even threatened to arrest any Nubian who tries to cross the security checkpoint, and they said they would besiege the caravan and ban any food or water from reaching the protesters for three days.”

The Nubian Return Caravan’s demands include:

Bashir added, “Our demands are clear. We will not accept promises without clear measures to fulfill them. We have trust issues with the government. Our demands are neither political nor security related. Therefore, the security institution’s moves to deter us are not justified. Our demands are stipulated in the constitution, which indicates a 10-year time line for their implementation.”

He stressed, “The Nubians’ protests will not stop. The fear barrier has been broken, and the protests will go on until the demands are met.”

Ever since security forces blocked the caravan’s way and forbade it from reaching Toshka, Nubians started blocking main roads and the railway line in Aswan to pressure security forces to open the road or at least allow foodstuffs to be delivered to the caravan. Members of the General Nubian Union in Cairo announced that they would stage an open sit-in in Tahrir Square until the crisis ends.

In the first official response to contain the crisis and negotiate with the protesters, a former commander in chief of the Egyptian armed forces, Field Marshal Mohamed Hussein Tantawi, headed to Aswan and met with officials from the governorate and with the Nubian member of parliament to resolve the stalemate. Prime Minister Sherif Ismail also held two meetings with parliamentary delegations Nov. 21 to act as intermediaries between the government and the Nubian protesters.

After meeting with the prime minister, member of parliament Saad al-Jamal told Al-Monitor, “The government pledges to implement the Nubians’ demands and to develop Nubian villages as a key part of the developmental plans in Egypt, and without any discrimination.”

He said, “Ismail has asserted to the members of parliament that any development in Upper Egypt would prioritize the region’s inhabitants. The government has also allocated 270 million Egyptian pounds [$15.4 million] to develop Nasr al-Nuba villages.”

Despite official attempts to contain the crisis by communicating with members of parliament, Mohammed Azmy, the head of the General Nubian Union, told Al-Monitor over the phone, “We did not receive any calls for dialogue with Field Marshal Tantawi or with the speaker of parliament.” He added, “We refuse any negotiations unless an official and explicit decision to halt the sale of Nubian lands is issued.”

The Nubian predicament dates to 1902, when the Aswan Low Dam was completed. Ten Nubian villages were submerged. When the dam was elevated in 1932, 18 more villages were submerged, and 11 villages suffered displacement in 1964 when the Aswan High Dam was built. All the Nubian lands sank below the stored water behind the dam in Lake Nasser. Official promises to repatriate Nubians and compensate them for their losses have been made since the days of President Gamal Abdel Nasser, who died in 1970. However, these promises never materialized due to security concerns about potential secessionist demands from Nubians.

Tensions resurged when Sisi came to power, especially after the approval of Presidential Decree 444 to remap the borders of governorates and to reclassify 110 square kilometers (42 square miles) of Nubian territories as a military zone. This decision brought back the controversy of the Nubians giving up their lands for the public interest, just like what happened when the Nubian villages were submerged to build the High Dam — to save Egypt from the risks of the Nile flooding and achieve development.

The 2014 constitution states that Nubians must be repatriated to their homeland. This seemed like a new victorious chapter in the Nubian struggle. However, the conflict between Nubians and the Egyptian government has not ended. The predicament must be addressed with political and security sensitivity, which is aggravating the trust issues between Nubians and the government.