Faced with threats from damming projects, Arabization and marginalization, Nubian communities in Egypt and abroad are exerting efforts to preserve their language and unique cultural heritage. 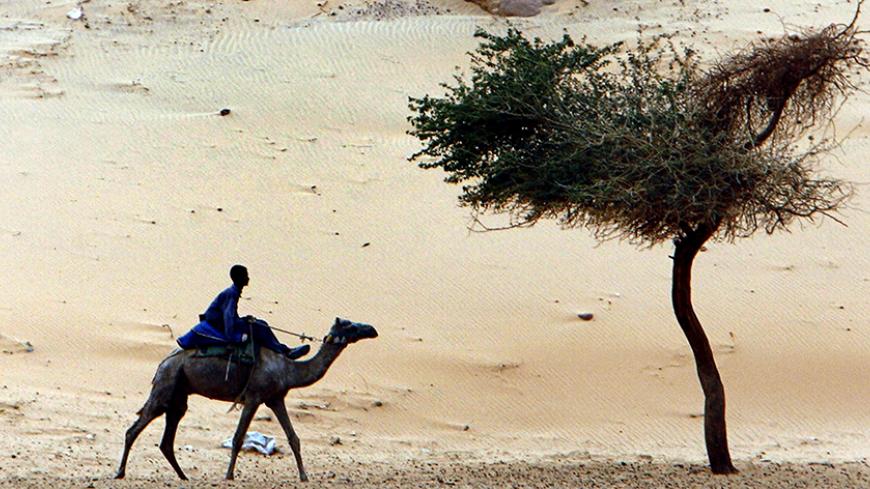 A Nubian boy rides a camel at the Nile River bank in Aswan, March 25, 2007. - REUTERS/Goran Tomasevic

It has been 51 years since the Nubians were displaced by the 1964 building of the Aswan High Dam in southern Egypt. Back then, waters flooded their homes and ancient Nubia disappeared into the depths of Lake Nasser. Yet, the Nubian people refused to allow their heritage and culture to be forever lost under the water that flows behind the High Dam.

In the town of Kom Ombo in the Aswan governorate there is the village of Balana (meaning “beautiful queen” in Nubian), the inhabitants of which were the first to be displaced as the High Dam rose. Amina Ibrahim, a village woman in her 60s, still carries vivid memories of the old country that thrived on the banks of the Nile — memories that form the essence of stories about her family’s heritage and past, which she never hesitates to recount to neighbors, sons and grandsons.

Al-Monitor met with Ibrahim at her home, which consists of four rooms overlooking a large central courtyard on the walls of which she tried to replicate and draw Nubian decorations and carvings that once adorned the ancient Nubian mud-brick dwellings of the village, with their distinctive domed roofs designed to dissipate some of the overbearing heat.

Nubian is the language of choice for Ibrahim, her children and her grandchildren. “Language is our life and the only legacy that remains of our ancestors. Preserving our language and teaching it to my children and grandchildren who never lived on their forbearers’ land became my main mission in life after our deportation, on my quest to safeguard and maintain our generational legacy. I always tell my grandchildren that losing our Nubian language would mean losing our identity and roots.”

The question of preserving the Nubian language is atop the priorities of most Nubians in their attempts to safeguard their heritage and identity. However, they do mesh with Egyptian society and utilize Arabic in their daily dealings, with new generations failing to practice this language that is barred from schools and public institutions.

What distinguishes Nubians is their organizational ability and keenness to coalesce into Nubian communities in the provinces and countries of their diaspora. The General Nubian Club operates offices in Cairo and Alexandria in addition to other Nubian associations in a number of Arab and European countries and in the United States.

The Nubia project is an organization established in 2008 by the Nubian diaspora in Washington. They aim to educate people about the dangers of damming, Arabizing Nubia, cultural cleansing and marginalizing the Nubian culture. The project has already appealed to the African Union, the United Nations and the international community to protect Nubian heritage.

The director general of Aswan Antiquities at the Ministry of Antiquities, Ahmed Saleh, told Al-Monitor in that regard, “The Egyptian state should have taken it upon itself to protect Nubian heritage. However, Nubian communities find themselves solely responsible for preserving [their] language, customs and heritage.”

Despite the fact that Nubian is a language that predates the Coptic era, it nevertheless is not a written language but is passed on, in the modern age, through oral storytelling alone.

“There are now wide-ranging initiatives to revive the Nubian language through the General Nubian Club in Egypt, as well as to intensify studies to document and teach the language to Nubians and interested Egyptians. The Egyptians disallowing the use of Nubian in all social and educational institutions is cause for concern and fear that the Nubian identity may be lost, particularly in the absence of incentives encouraging younger generations to practice said language, as Arabic is the dominant and primary language in Egyptian schools and society. This is leading all Nubian families to pressure their children into speaking Nubian, at least inside the home,” Saleh said.

Al-Monitor also spoke with Hani Kabara, a Nubian man in his 30s from the village of Abu Simbel; he organizes courses to teach Nubian language basics at the General Nubian Club. He said, “Nubians who go to Cairo or elsewhere forget their mother tongue after a few years of disuse. This is what we are trying to prevent as we rekindle their bond with the language and allow them to practice it anew through these courses.”

Kabara employs many methods to overcome the problem of teaching a language that has no written tradition, through listening to old Nubian songs, translating their lyrics and teaching the meaning of the most commonly used Nubian words and writing them in Arabic script.

“We believe that every Nubian is obligated to learn and spread their language, as this is an essential step in preventing its demise. Some Nubians think that holding on to their language will hinder their ability to interact with Egyptian society, particularly in light of the rejection of pluralism and the prevalence of fanaticism by some toward the Egyptian-Arab identity,” Kabara added.

Nubian songs continue to be the customary and most effective method by which Nubians preserve their language and music, traditionally sung to the beat of drums resembling, to a great extent, African music.

Kabara said, “We use songs to preserve our linguistic legacy, particularly in light of the fact that Nubians retain their love for ancestral tunes, which they prefer over Arabic and Egyptian melodies, whereby Nubian songs are the most commonly heard during Nubian festivities and social events.”

In that regard, a few Nubian artists succeeded in enriching the Nubian repertoire with a number of musical pieces that conveyed stories about the lives and suffering of the Nubian people after their displacement. Most prominent among those artists was Hamza Ala’uddin, also known as “the Nubian Flutist,” whose most famous song, Awish, spoke of the splendor of ancient Nubia, the land of magic and beauty.

Despite the absence thus far of any formal recognition of the Nubian cause by the government, Nubian heritage remains entrenched in the psyche of Nubians living in exile inside Egypt and abroad; Nubians whose primary concern is the preservation of their identity, especially among those who experienced life in ancient Nubia.