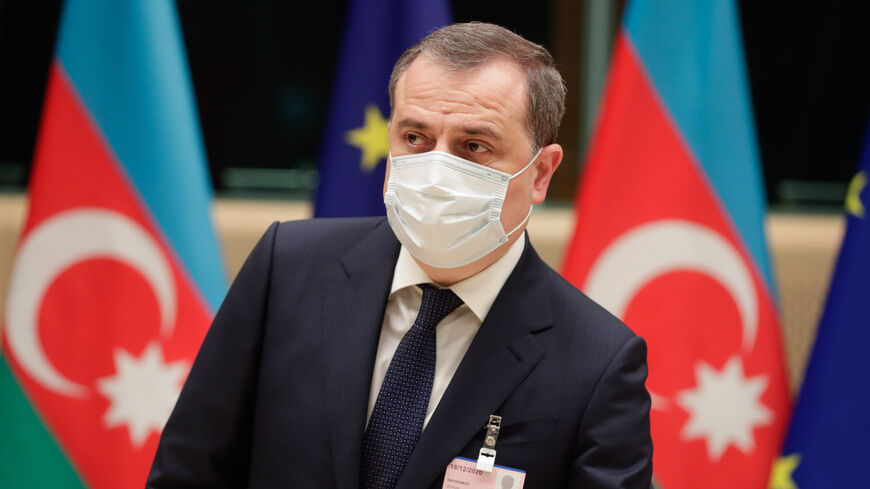 Azerbaijan Foreign Minister Jeyhun Bayramov is seen at the start of a EU-Azerbaijan Cooperation Council at the European council building in Brussels, Belgium, Dec. 18, 2020. - STEPHANIE LECOCQ/AFP via Getty Images

Azerbaijan will settle its differences with Iran through dialogue, the Azerbaijani Foreign Ministry announced on Wednesday following weeks of tensions over Baku’s ties with Tehran’s main foe, Israel.

During their phone call Tuesday evening, Azerbaijani Foreign Minister Jeyhun Bayramov and Iranian Foreign Minister Hossein Amir-Abdollahian “stressed the importance of always respecting the principles of territorial integrity and sovereignty of the countries.”

"The sides noted that recent rhetoric has harmed bilateral relations and that any differences should be settled through dialogue," the Azerbaijani Foreign Ministry said in a statement Wednesday.

“Both Tehran and Baku have enemies, and the two sides should not provide opportunities for the enemies to disturb the two countries’ relations,” Amir-Abdollahian was quoted by Iranian outlet IRNA as saying.

Tensions have risen between Iran and neighboring Azerbaijan in recent weeks, driven in part by Baku's longstanding ties with Israel and reports it was considering buying Israel’s Arrow-3 missile defense system.

Israel is a major arms supplier for Azerbaijan. During its six-week war with Armenia for control of the disputed Nagorno-Karabakh region last year, Azerbaijan deployed Israel-made surveillance drones on the battlefield.

Tehran has accused Azerbaijan of harboring Israeli military personnel, a charge Baku has rejected as “totally baseless.” Amid the friction, Amir-Abdollahian met in Tehran last week with his Armenian counterpart, Ararat Mirzoyan.

Further straining the relationship, Azerbaijan imposed a road tax and set up checkpoints for Iranian trucks shipping goods to the Armenian capital.

According to IRNA, Bayramov "proposed that the customs officials of the two countries should negotiate aimed at solving the problems that the Iranian truck drivers are faced with in transiting goods."

In a move that added to tensions with its neighbor, Azerbaijan held joint military drills in September with Turkey and Pakistan near the 700-kilometer (435-mile) border that Azerbaijan shares with Iran. Tehran responded by staging drills of its own earlier this month, and again on Tuesday.