The move came following pressure from the Turkish president. 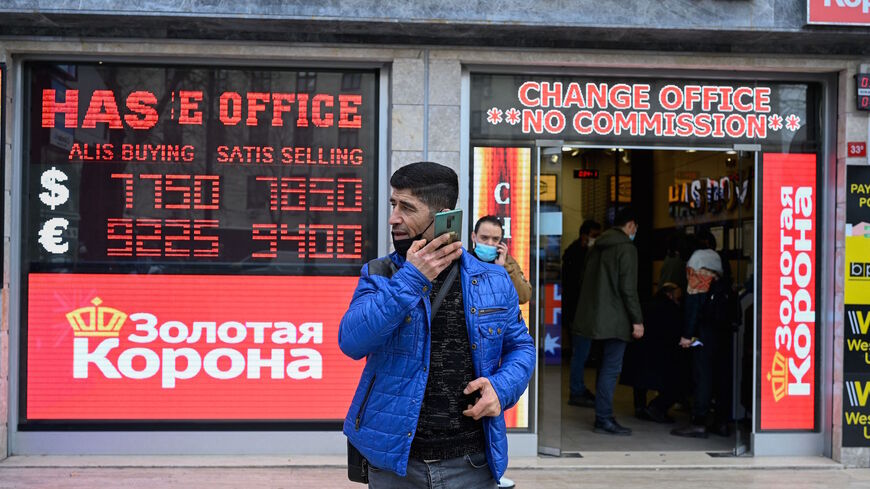 People stand in front of a exchange office at Laleli in Istanbul, on March 22, 2021. - BULENT KILIC/AFP via Getty Images

Ceding to pressure from President Recep Tayyip Erdogan, Turkey's central bank trimmed its policy rate by 100 basis points to 18% on Thursday, in an apparent bid to stimulate the economy in the midst of high inflation and mounting popular discontent at giddying prices.

The embattled Turkish lira tumbled against major currencies, dipping as far as 8.74 to the dollar, a near-record low.

Most analysts were caught by surprise. “We did scent a growing risk that interest rates would be cut,” said Emre Peker, the London-based director of the Eurasia Group, a risk assessment outfit. "However, despite all the signaling, we believed the cut would not come before October due to the negative impact any cut would have on inflation expectations."

Like many, Peker said the move would further erode the central bank’s credibility. “From here on, the markets investors will be heeding Erdogan, not the [central bank governor Sahap] Kavcioglu,” Peker told Al-Monitor.

Wolfango Piccoli, co-director and political risk analyst at Teneo Intelligence, is an outlier who expected the cut. “The stage for the cut was set some time ago. Erdogan indicated when the new governor was appointed that he was expecting a rate cut by July or August,” Piccoli told Al-Monitor.

“More recently the governor and the central bank started talking about paying attention to core inflation and not headline inflation when they were doing their assessment,” Piccoli said. Core inflation is the rate at which prices of goods and services increase. Food and energy prices are not included because of their volatility. Food prices have soared in Turkey in recent months. Figs, a summertime staple, for example, have become a luxury item.

“If you have interest rates like 19 percent as you did until today and inflation is higher, you cannot really find an excuse to cut. Core inflation at that point was 16.50 so by referring to that you can try to save face because you can argue that rates are still above inflation,” Piccoli noted. "These are just tricks, and nobody in the market buys into that."

The central bank’s policy committee said a rate cut was required because of the lower core price measures and that the recent rises in inflation were due to “transitory factors.” Low rates were beginning to have “a higher than envisaged contractionary effect on commercial loans.”

Kavcioglu was handpicked by Erdogan in March. He had been resisting the Turkish leader’s near obsessive demands to keep interest rates as low as possible, even though three of his predecessors were sacked over the past 20 months over that issue. Critics say Erdogan’s aversion to higher rates is about securing cheap credit for his business cronies. Others say his aversion stems from Islamic piety. Both are probably true.

Erdogan has long argued that high interest rates cause high inflation, though most economists argue the opposite. The Turkish lira has paid the price for his unorthodoxy, becoming one of the worst performers in emerging markets in recent years. Foreign investors have shed their Turkish positions in droves. This in part may explain why the Turkish lira did not fall as hard as it might have had foreigners held significant stakes.

The weakening economy is taking its toll on Erdogan and his ruling Justice and Development Party (AKP). Their polls numbers are weaker than they’ve ever been since they took power in 2002. Surveys consistently indicate that Erdogan could lose against his opponents and the AKP could lose its parliamentary majority in dual elections that are due to be held in 2023.

There is persistent speculation that Erdogan may hold snap polls and the rate cut, which is meant to stimulate the economy, is seen as further evidence of this. However, sources close to president say he has no such plans and is bent on improving economic indicators ahead of the vote, ratcheting up government spending in the coming year. While this may bring short-term relief, it may also cause further structural damage to Turkey’s once-robust economy.

Peker points to another factor militating against quick elections. Erdogan needs time to pass draft laws crafted to boost his electoral chances and that of his informal coalition partner, the Nationalist Movement Party, whose ratings are sagging as well.

Either way, Turkey’s economic troubles are unlikely to dissipate any time soon.

“At the end of the day Turkey remains stuck in a vicious circle, because a 1 percent cut if you are looking for cheaper credit doesn’t really make much of a difference,” Piccoli observed. “So the question really ahead is whether this is just the beginning of a substantial monetary easing or just a one-off to appease Erdogan.”