Turkey stepped up its attacks against Kurds in Syria, which raised concerns among the Kurdish forces over the US and Russian roles. 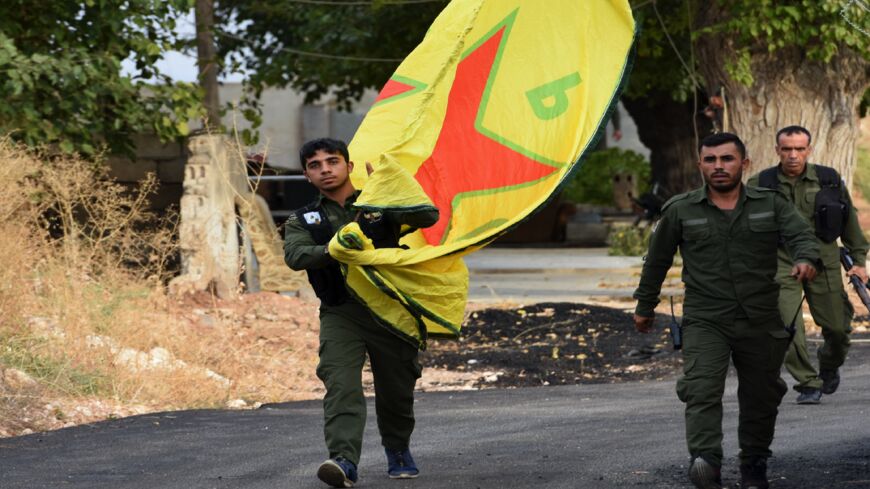 Syrian Kurdish fighters walk carrying a People's Protection Units (YPG) yellow flag in the Syrian Kurdish town of Kobani, also known as Ain al-Arab, along the border with Turkey in the north of Aleppo governorate on Oct. 18, 2019. - AFP via Getty Images

IDLIB — Turkey has recently stepped up its strikes against the Kurdish People’s Protection Units (YPG), the main component of the Syrian Democratic Forces (SDF), in Syria. Ankara views the YPG as an extension of the Kurdistan Workers Party (PKK), which Turkey and its Western allies classify as a terrorist organization.

The SDF had led the battles against the Islamic State (IS) in Syria with the support of the US-led international coalition.

On Aug. 23, a military official said a Turkish drone targeted a military vehicle that was parked near the western entrance of the city of Qamishli at the gate of a medical center in the vicinity of the village of Himo. He said the attack resulted in casualties, but he neither disclosed their numbers nor health status. According to the Syrian Observatory for Human Rights, the Turkish drone targeted a political leader in the Kurdish-led Autonomous Administration of North and East Syria.

On Aug. 21, a Turkish drone targeted a prominent YPG leader who succumbed to his wounds after he got hit along with his companion at the Ali Faro road junction connecting the city of Qamishli to the town of Amuda. The Syrian Observatory for Human Rights said the Kurdish leader was of Iranian nationality.

On the same day, another Turkish drone bombed a car at the Sofian farm south of the city of Ayn al-Arab (Kobani) in the eastern countryside of Aleppo, which led to material damage with no casualties reported.

The Syrian Observatory for Human Rights reported on Aug. 20 the killing of nine members of the SDF forces by a Turkish drone that hit the headquarters of the Military Relations Office of the Tal Tamar Military Council where military leaders were holding a meeting.

Turkish strikes also targeted several locations, including the headquarters of the Tal Tamar Military Council, where three Kurdish commanders were killed. A fourth commander was also targeted in his vehicle in a separate strike.

On Aug. 20, the General Command of the SDF said in a statement that “moving forward, we will not remain silent in the face of the occupation’s attacks. This brutal Turkish attack that led to the martyrdom of these dear commanders and fighters will not go unanswered. The reckoning shall be harsh.”

The statement talked about the Turkish attacks that resulted in the killing of commanders and criticized the silence of Washington and Moscow regarding these attacks.

It stressed that “the silence and the ambiguous position of the guarantor states of the cease-fire, such as the United States and Russia, encourage the Turkish state to intensify its attacks. We remind them of their responsibilities and call on them to clarify their positions.”

In this regard, Shervan Derwish, a Kurdish leader residing in Manbij in the northeastern countryside of Aleppo and spokesman for the Manbij Military Council, told Al-Monitor, “We want Turkey to be a neighboring country. We are not its enemies, nor do we pose a threat to it. The Turkish attacks against us have diversified, the most recent of which was the use of drones, which is a new method to destabilize northeastern Syria. This is a serious escalation. We do not believe that there is an American or Russian green light for Turkey to bomb us, but the US and Russian silence and the failure to take a clear position against Turkey made it persist in its attacks. The Russian and US positions are not up to the required level, as they do not deter these Turkish attacks.”

He added, “We will defend our right to defend ourselves at the time and place we see fit, and we will respond to these attacks. These Turkish attacks can escalate and take other forms if they continue to be met with international silence, as they aim to control more Syrian territory. But we have a defensive system that we will defend. We expect Turkey to keep launching such attacks, but the presence of the US and Russian forces in northeastern Syria may contribute to finding a political solution to the Syrian crisis.”

In this regard, Ahmed al-Hassan, a Turkey-based journalist who is an expert in Turkish affairs, told Al-Monitor, “The drone strikes reflect several internal Turkish shifts, as Turkey is currently witnessing early preparations for fierce elections, and the Kurdish issue constitutes a major part of the Justice and Development Party’s approach. And these attacks aim to place pressure to return to negotiations for a Kurdish solution to win over Kurdish voters. The interests that [Turkey] reaps from these raids include the Turkish interior, improving internal alliances and the possibility of attracting new parties.”

He added, "Turkey does not need a green light from the US to bomb the Kurds. Turkey weighs the pros and cons before launching any military operation. And for now, it prefers pressure over expanded military action to improve some of its projects regarding the Kurdish file.”

Hassan further stressed that the Kurdish parties are now aware the post-Afghanistan period is not the same as before, the challenges have become greater than before and the rivalry with Turkey will differ moving forward.

Regarding IS’ exploitation of the Turkish strikes against the SDF, Hassan said, “[IS] poses a great threat to the Kurdish forces, especially amid the spread of its sleeper cells and the presence of a large mass of its members in SDF prisons and their families in their camps. This is a time bomb that may explode whenever there is a security issue.”