The Russian president self-isolated after the meeting due to COVID exposure, but a spokesman said "no one's health was in danger." 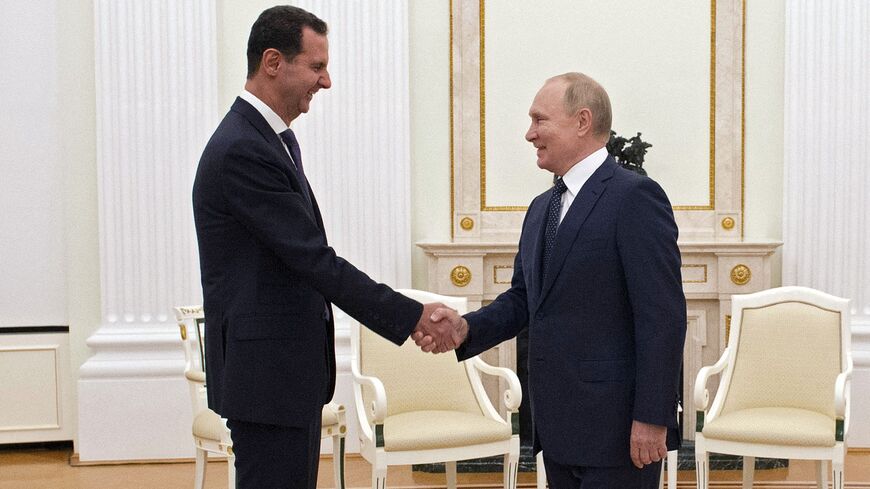 Syrian President Bashar al-Assad was in Russia on Monday for a meeting with his ally President Vladimir Putin.

Assad thanked Russia for its efforts to “combat terrorism” in Syria, touting the “great achievements” of the Syrian and Russian militaries since the Russian military intervention in 2015. He also decried the “siege on the Syrian people,” which could be a reference to US sanctions on the country. Assad also praised Russia’s defense of Syria’s sovereignty and mentioned the Syrian peace talks in Kazakhstan.

“There are obstacles because there are countries that support terrorists and have no interest in the continuation of this process in the direction that would achieve stability in Syria,” said Assad, according to the official SANA news outlet.

The meeting was reported Tuesday by Syrian and Russian state media.

Russia intervened in Syria to help Assad’s government in fight against rebel groups in the civil war. Russian air support in particular helped turn the tide of the war in Assad’s favor, and his government now controls most of the country. Rebel groups are confined to the areas in the north controlled by Turkish-backed groups; territory held by the former al-Qaeda affiliate Hayat Tahrir al-Sham in the northwest Idlib province; and parts of the south.

For his part, Putin discussed Russia’s donations of COVID-19 vaccines to Syria, but did not mention any further deliveries. Putin likewise criticized the presence of foreign forces in Syria, which is a possible reference to US forces in the northeast, or Turkish forces in the north. The two also talked about Afghanistan, according to Russia’s official TASS news agency. The TASS report did not specify what was discussed on Afghanistan, which is under control of the Taliban following the US military withdrawal.

Putin went into self-isolation Tuesday after a member of his staff tested positive for COVID-19, though he himself tested negative for the virus. A Kremlin spokesman said Tuesday that the Assad meeting took place Monday morning before the quarantine order, and that “no one’s health was in danger.”